The Simplon Tunnel is a nearly 20 km long, two-tube, double-track railway tunnel between Switzerland and Italy. It crosses under the Simplon area and connects the Rhone Valley with the Val Divedro in the Ossola region.

The single-track tubes of the Simplon Tunnel, built in 1898–1905 and 1912–1921, were the longest mountain tunnels in the world at 19.8 km by the end of the 1970s . The tunnel was also known for the Simplon Orient Express that ran through it until 1962 . The breakthrough on one side (on the north side), known as the base tunnel , together with the Lötschberg base tunnel completed in 2007, forms the western (albeit less powerful) axis of the two-axis NEAT or AlpTransit concept.

Around 1870 there was already a project for a "Ligne d'Italie" with a tunnel from the Rhone Valley into the Val d'Ossola .

On July 1, 1878, the Compagnie du Simplon  (S) railway company reached its end in Brig and merged in 1881 with the Chemins de fer de la Suisse Occidentale  (SO) company to form the Suisse-Occidentale-Simplon  (SOS). The French financiers of the SOS showed a keen interest in a Simplon breakthrough and were able to secure the financing of the Simplon tunnel with loans in 1886. The construction of a tunnel from Glis to Gondo that was entirely on Swiss soil was chosen from among 31 projects. From there a ramp would lead through the Val Divedro down to Domodossola .

At a Swiss-Italian conference in July 1889, however, an agreement was reached on an almost 20 km long base tunnel, which should be on the territory of both countries. In order to secure the loan for a tunnel construction, the SOS joined forces with the Jura – Bern – Lucerne , in which the Swiss Confederation was involved, to form the Jura-Simplon Railway .

Thanks to the participation of the Swiss Confederation, a state treaty was negotiated with Italy on November 25, 1895 regarding the construction and operation of a railway through the Simplon from Brig to Domodossola, which regulated the construction and the granting of a concession to the Jura-Simplon Railway. For strategic military reasons, the route of the tunnel was chosen so that the border between Italy and Switzerland came to lie exactly in the middle of the tunnel.

On May 1, 1903, the Jura-Simplon Railway was nationalized and integrated into the network of the Swiss Federal Railways (SBB), which completed the construction of the tunnel. 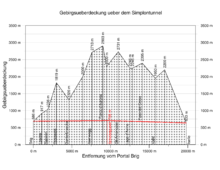 Mountain cover over the Simplon tunnel

The monument (dated May 29, 1905) in memory of the deceased workers of the Simplon Tunnel stands at Iselle di Trasquera station .

The construction work for the tunnel was entrusted to the Hamburg engineering company Brandt & Brandau by Karl Brandau and Alfred Brandt .

On average, 3000 people worked on the construction site every day. It was mainly Italians who suffered from very poor working conditions. 67 workers were killed in accidents, and many later died of secondary diseases. In memory of the unfortunate tunnel workers, a memorial was inaugurated on May 29, 1905 at the train station in Iselle di Trasquera . During the work there were strikes in which vigilante groups and the army marched.

As a tunnel temperature of up to 42 ° C was expected inside the mountain due to the mountain overlay of 2135 m, a new construction method was used. In addition to the single-lane main tunnel I, a parallel floor gallery was built at a center distance of 17 m, which was connected to the main tunnel by cross tunnels at a distance of 200 m. Fresh “ weather ” (fresh air) reached the construction workers in the main tunnel through air supply pipes laid in the parallel tunnel. For a later expansion to double-lane operation, it was planned to set up this parallel tunnel to a second driving tunnel. In order to obtain a crossing possibility in the long tunnel, the parallel tunnel in the middle of the tunnel was completely excavated and expanded over a length of 500 m for a locally operated crossing station.

The Simplon I tunnel (length 19,803 m) is straight, it only ends in short arches at the two tunnel portals.

On February 24, 1905 the breakthrough of the aligning tunnel took place ; the deviation was 20.2 cm laterally and 8.7 cm in height. As a result of the construction difficulties (water ingress, strikes), the construction had been extended from five and a half to seven and a half years. 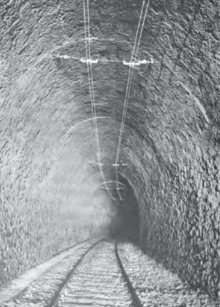 Two-pole catenary in the Simplon tunnel, two contact wires per pole. Right curve - view from close up inside one of the two portals towards the interior of the mountain. (Before 1917, so probably tube I)

Tunnel I was put into operation on May 19, 1906. Especially because of its length, electric traction was provided instead of steam operation from the start. The official decision to do so was only made six months before the opening by the then still young SBB. With the electrification, Brown, Boveri & Cie. (BBC) commissioned. This chose the three-phase system of 3000 volts and 16 Hz introduced in Italy from 1904 with a two-pole overhead line and the track as the third conductor. For the operation of the Simplon Tunnel BBC was able to rent three RA 361–363 locomotives of the northern Italian Veltlinbahn from its owner Rete Adriatica . The start of operations was made possible by the abandonment of the Rete Adriatica on two locomotives Fb 3/5 No. 364–365, which were already under construction by BBC and SLM for the northern Italian railway. On March 2, 1930, the Brig – Iselle section with the Simplon tunnel was converted to the single-phase alternating current system with 15 kV at 16⅔ Hz, which is common in the Swiss standard gauge network .

During the Second World War , preparations were made on both sides of the state border for a possible blasting of the tunnel tubes. The explosive charges already installed under the tracks in the Swiss tunnel section were not removed until 2001. In Italy, the German Wehrmacht planned a demolition as part of their retreat in 1945, but this was thwarted by Italian partisans with the help of two Swiss officials and Austrian deserters. The 64 tons of TNT brought to Varzo by the Germans were burned next to a railway embankment.

On August 28, 1971, a train in the station in the middle of the tunnel drove at 100 km / h over a switch that was only passable at 50 km / h in the branching line. The rear cars derailed, tipped sideways and hit the tunnel wall. The derailment left five dead and 29 injured.

On July 23, 1976 the Riviera-Express Ventimiglia - Amsterdam / - Dortmund derailed in the curve at the northern tunnel exit due to excessive speed. The Re 6/6 locomotive derailed, tipped over and brushed along the tunnel wall. As a result, she blocked the path of the following car. The accident cost six lives.

The section of the route was equipped with speed monitoring, which was implemented with the help of the Integra-Signum train protection system .

On June 9, 2011, several wagons of a freight train caught fire after unauthorized persons tampered with a semi-trailer that was being transported by train. The tarpaulin of the semi-trailer came off while driving through the Simplon tunnel. The wind hit the overhead line several times , causing a voltage flashover and generating an electric arc that set off a fire in part of the train.

The repair was completed in mid-November 2011 and cost around 12 million francs.

The fire destroyed one of the two 132 kV traction current cables from the Massaboden power station to the Varzo mobile substation . If the other line had failed, only the traction power supply would have been available via the contact line . In order to avoid an excessive voltage drop in this case , two 185 locomotives from Railpool in Domodossola were used stationary as regulated reactive power compensators from July 2011 .

Furthermore, as a result of the accident, a profile location system was installed at the exit of the Domodossola station in the direction of Simplon, which triggers an alarm for any parts protruding from the vehicle perimeter in or when trains are being loaded, so that the train affected is already in the following Preglia station in front of the first tunnel of the Simplon line can be stopped.

Considerations for a base tunnel

At the end of the 1980s, the construction of a 35.4 km long Simplon Base Tunnel between Brig and Domodossola was considered.

There is a car transport service between Brig and Iselle di Trasquera . The twenty-minute train journey is an alternative to traveling over the Simplon Pass .

On the Lötschberg-Simplon axis, the Rolling Road RoLa project for transalpine goods traffic was implemented in the early 1990s . Due to the existing tunnel profile of the Simplon Tunnel, however, the capacity was severely limited. It was too low for the transport of trucks with an approved maximum corner height of up to four meters. Therefore, the clearance profile had to be expanded by lowering the rails. The extremely complex work to lower the tunnel floors began in 1995 and lasted eight years. At the same time, the tunnel vault was renovated, while the tunnel drainage had to be rebuilt, as space could only be created below. A total of 200,000 m³ of rock was broken out with hydraulic hammers . In addition, the contact line was replaced by a design with a lower system height in order to achieve the necessary clearance height of 4.90 m. Railway operations were maintained with restrictions during the entire construction period.

From December 2011 to July 2015, SBB had the tunnel renovated for 180 million francs. For self-rescue measures, walkways, handrails, emergency lighting and escape route signs were installed in each tunnel tube. Every 500 to 600 meters, connections between the two tunnel tubes were established as escape routes with gate closures. For this purpose, the existing cross passages were rebuilt and three more were built. The drainage systems and the track superstructure were replaced.

In order to develop the Lötschberg-Simplon axis into a high-performance transit axis, various extensions have been made to the various access routes (from Bern and Lausanne in the north and from Novara and Milan in the south) in recent years and decades. The most extensive projects concerned the northern approach from Basel and Bern via Lötschberg . Between 1976 and 2007, it underwent major redesigns three times in a row. First, the remaining single-track sections between Spiez and Brig were upgraded to double-track. Subsequently, profile adjustments were made for piggyback traffic (sometimes only single-track). In 2007, the Lötschberg base tunnel , which was once again only partially expanded to a single track, was finally opened.

The profile extensions for piggyback traffic were also made on the Simplon southern ramp, which falls under Italy's responsibility. Here too, for financial reasons, only one lane was expanded in parts to meet the needs of the Rolling Motorway . South of Domodossola, the single-track line to Novara along Lake Orta was electrified and modernized.

On the classic, but less important for today's transit traffic, the Simplon approach from Paris and Lausanne, adjustments were also made as part of Bahn 2000 and prospects for the future. In November 2004, the seven kilometer long Salgesch – Leuk line in the Rhone Valley was completed to replace the last single-track bottleneck on this axis. As part of the ZEB package, an increase in the permissible speed from 160 to 200 km / h is planned on the long straight sections of the Rhonetal line.

The southern portal of the Simplon Tunnel near Iselle in Italy

For the 50th anniversary in 1956 the Italian Post issued a 25 lire stamp with four things wrongly represented:

In the novella Der Tunnel von Dürrenmatt, the train drives into a tunnel that unexpectedly no longer ends. An Englishman knocked knowingly on the window and said «Simplon».

Structures of the NEAT axes (planned, under construction and existing) from north to south