Border between Italy and Switzerland

The border between Italy and Switzerland consists mostly of land borders. In Lake Maggiore and Lake Lugano , the border also runs through bodies of water. 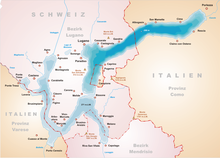 At 782 kilometers, the state border with the Republic of Italy is Switzerland's longest state border; the international borders of the Swiss Confederation have a total length of 1935 km.

The village of Campione d'Italia is an Italian exclave in the Swiss canton of Ticino .

One of the 48 European triangle (Italy / Austria / Switzerland) is located near the Reschen Pass .

The border was extended in 1919 by the Treaty of Saint-Germain , with which South Tyrol became part of Italy.

The boundary on the Matterhorn is currently being revised due to the melting of the glaciers .

Border between Switzerland and Italy

US soldiers at the Swiss border in Val Müstair (1945)

The course of the border has also been changed several times in recent history. Various agreements, exchange of notes, protocols and contracts were concluded in this regard. Contracting parties were not only the Republic of Italy and the Swiss Confederation, but also entities that have merged into one of these state structures. Important border agreements are:

In spring 2020, the NZZ reported on differences.

(incomplete)
Alpine passes between Italy and Switzerland are:

along the main Alpine ridge, from west to east:

south of the main ridge:

Commons : border between Italy and Switzerland  - collection of images, videos and audio files