The Great St. Bernhard ( French Col du Grand Saint-Bernard , Italian Colle del Gran San Bernardo , outdated French Mont-Joux , Latin Mons Jovis ["Mountain of Jupiter"]) is a pass in the Valais Alps , which the Rhone Valley in the Swiss canton of Valais at an altitude of 2,469  m M. connects with the Aosta Valley and further with the Italian region of Piedmont .

Until the Middle Ages

Despite the great height, the pass has been climbed since the early Iron Age, as is shown by finds along the access road in the north. At the time of the Roman Empire , it was one of the most important alpine crossings. He is first mentioned by name by Julius Caesar in De bello Gallico III, 1. Then came other Roman and Greek authors such as Titus Livius (Ab urbe condita V, 35, 2) and Strabo (IV, 6, 7). Until it was expanded as a road under Emperor Claudius , however, it was only a mule track . Its great importance in Roman times is primarily due to the direct connection from Northern Italy to Gaul and the Rhine, with no difficult-to-pass gorges at the entrances, such as the Gotthard Pass, to make passage difficult .

At the top of the pass there was a temple in Roman times, in which the native (Celtic) god Poeninus was worshiped, who was equated by the Romans with Iuppiter Optimus Maximus in the sense of the Interpretatio Romana . In the Middle Ages, the pass was called Mont-Joux ( mons Iovis ).

In addition to its importance for the travels of secular and spiritual dignitaries as well as merchants and crusaders from north to northern Italy, the pass was also a central part of a network of pilgrimage routes from the Franconian Empire and its successor states to Rome ( via francigena , German: Frankenweg). In particular, he is also mentioned in the detailed travelogue of Archbishop Sigeric the Serious of Canterbury in 994.

Around 1050, the hospice on the Great St. Bernhard was founded by Bernhard von Aosta on the pass , which also gave the pass its current name. Here, the St. Bernard dog breed was bred as a rescue dog for the search for avalanche victims and made famous worldwide primarily through Barry , who is said to have saved the lives of over 40 people.

View of the pass crossing and the hospice from the Italian side, on the left the AFD border control 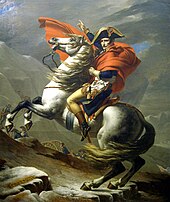 On May 14, 1800, Napoléon Bonaparte crossed the Alps here on his way to Italy.

In 1905 a drivable road was completed.

From 1940 to the 1990s, the pass formed the south-western boundary point of the Swiss Redoubt , the approaches on the Swiss side were accordingly secured by terrain obstacles and barriers against potential attackers and could also be blocked by artillery .

For a long time the path was only passable in summer. Since 1964, the route has been shortened year-round by the 5.85 km long, toll-based Grosser St. Bernhard Tunnel .

The summit of the Great St. Bernhard is the stage destination of long-distance hiking trail no.6 Alpine Passes Trail from Wanderland Schweiz and the starting point of the 12-kilometer circular hike no.210 Les cols du Grand-St-Bernard around the Pointe de Drône , walking time approx. 5 hours.

The area around the Great St. Bernhard is a popular destination for ski tourers in winter . B. the ski tour to the Point de Drône.