from Wikipedia, the free encyclopedia
f1 Valais Alps, in the foreground the Mont-Blanc group

The Valais Alps (also Pennine Alps ) are a mountain group in the western Alps . Switzerland with the canton of Valais and Italy with the regions of Piedmont and Aosta Valley have a share . The mountain range extends over the large area between the Rhone Valley in the north and the Aosta Valley in the south and between the Simplon Pass in the east and the Great St. Bernard in the west. In the guidebooks of the SAC for practical reasons still extended from Griespass the Nufenenpass the east to the Eau Noire and Trento in the West.

The highest mountain in the Valais Alps is at 4634  m above sea level. M. the Dufourspitze in the Monte Rosa massif .

The Valais Alps are the record holders among the Alpine groups: they are the Alpine group with the largest glaciation, and there are also the most four-thousand-meter peaks of all Alpine groups. They also have the greatest difference in altitude within a mountain group in the Alps: between the highest (Dufourspitze, 4634  m above sea level ) and the lowest point ( Dora Baltea river near Ivrea in Piedmont , 253 m) there is a difference in altitude of almost 4400  m ü. M. The Italian Monte Rosa east wall is the highest wall series of the Alps with an altitude difference of nearly 3000  m above sea level. M .; There are many of the four-thousand-meter peaks in the Monte Rosa massif.

Panorama of the Valais Alps from the Allalin Pass . The striking peaks are the Breithorn , Matterhorn , Dent Blanche , Zinalrothorn , Weisshorn , Alphubel and Allalinhorn .

→ Main article : List of the four-thousand-meter peaks in the Valais Alps 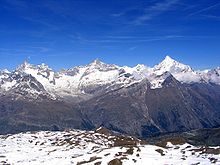 This subgroup of the Valais Alps is described separately under the Leone group .

In accordance with Article 5 of the Federal Act on Nature Conservation and Heritage Protection, Switzerland keeps a federal inventory of landscapes and natural monuments of national importance .

There are currently seven of these landscapes in the Valais Alps:

Due to the large differences in altitude and the glaciation, there are no pass crossings over the main ridge between the Great St. Bernhard and the Simplon in the Valais Alps . There are some passes that are accessible via mule tracks, hiking trails or on skis. The Theodulpass between Matterhorn and Breithorn and the Adlerpass in the Mischabel group are well known. The Saas Valley is connected to the Italian Val d'Ossola by the Zwischenbergen Pass via Gondo and by the Monte Moro Pass via the Valle Anzasca .