The Lac des Dix [ ˌlakdeˈdis ] is a reservoir that lies in the upper part of the Val d'Hérémence in the canton of Valais in Switzerland . The Grande Dixence dam on the Dixence dams the lake to the target of 2364  m above sea level. M. on. It is located 17 km south of the canton capital Sion , was the fourth highest dam in the world in 2015 and at 285 meters the tallest structure in Switzerland. The lake and dam are part of the Grande Dixence power plant , but are also used by the Cleuson-Dixence power plant . 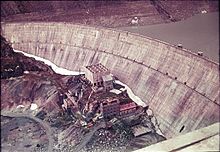 From 1926 to 1934 Energie de l'Ouest Suisse SA (EOS) built the first Dixence dam. This pier dam with a crown height of 85 m was designed by engineers Alfred Stucky and Jean Landry . Electricity was generated in the Chandoline power station from 1934.

Between 1947 and 1951, an inlet tunnel from Lac de Cleuson to Lac des Dix was built to increase electricity generation.

In 1950, Grande Dixence SA was founded as a subsidiary of EOS with the aim of using the water from all tributaries of the Rhone between the Vispa and Dranse de Bagnes . A new dam was to be built and an over 100 km long network of inlet tunnels to fill the lake. Contrary to expectations, the water rights on the Dranse de Bagnes were not given to Grande Dixence SA, but to Forces Motrices de Mauvoisin SA, which built Lac de Mauvoisin with the associated power plants. The planning of the system was carried out by the company's own office with the support of Alfred Stucky.

In order to finance the large-scale project and to use the energy generated by the system, EOS looked for other partners that were found in German-speaking Switzerland. These were BKW , NOK and the city ​​of Basel . However, EOS remained the main shareholder in Grande Dixence SA with a 60% stake in the company.

The flooding was initiated on July 17, 1957 by opening the old dam wall. The other parts of the plant were put into operation in stages between 1961 and 1965. In addition to the dam, these were the 24 km long main tunnel at an altitude of 2,400 meters, which is fed with water from four pumping stations, and two new power plants, which together with the existing Chandoline power plant convert the lake water into electrical energy. The pumping stations are located in Zmutt and Stafel above Zermatt and in Ferpècle and Arolla in the Val d'Hérens , the power stations in Fionnay in the Val de Bagnes and near Nendaz in the Rhone Valley.

Closure of the Chandoline headquarters

The Chandoline headquarters was shut down on May 1, 2013 because it was no longer economical to operate. In 2015, the dismantling of the technical systems was in progress.

Micro cracks in the pressure pipe

In the summer of 2016, microcracks were found in the weld seams of the pressure pipe from the Nendaz headquarters during the overhaul . Only the above-ground section of the line between Péroua and Condémines is affected by the damage. The Nendaz and Fionnay centers were therefore no longer in operation and the affected part of the pressure line was emptied. The damage is said to cost CHF 48.5 million . The preparatory work began in the summer of 2019. A restart is planned for 2023.

Between 1993 and 1998, the existing facilities were supplemented with the Cleuson-Dixence project , which enables better use of the reservoir contents by connecting an additional power station to the reservoir. For the new Bieudron power plant with an output of 1269 MW, a water intake had to be drilled into the dam wall and a 15.8 km long supply tunnel and a 4.3 km long pressure tunnel with a surge tank had to be built. The facility cost CHF 1.3 billion and is completely underground. It was able to increase the total output of the power plants supplied by the Lac des Dix by a factor of 2.5, making it possible to process the contents of the reservoir in just 1000 hours. The output of the Bieudron power plant corresponds roughly to that of a nuclear power plant and can be made available to the grid within just three minutes.

Rupture of the pressure tunnel

On 12 December 2000 against 20:10 in 1999 put into operation, tight running under the slope surface burst pressure pipe with a nominal diameter of 3.2 m, the water from the water tower Tracouet ( 2250  m above sea level. M. ) to the power plant in Bieudron ( 540  m above sea level ) leads. The line was torn open between Condémines and Fey ( 1234  m above sea level ) over a length of 9 m and a gap width of 60 cm. A 3 m long longitudinal seam of the steel cladding burst, and the crack propagated through two more sections of the pipe. The head slide on the water lock was automatically closed immediately. Nevertheless, about 27,000 m³ of water leaked out, which was located above the break point up to this slide in the pipe.

This killed three people and seven mountain huts and four barns were destroyed by the water, rock and earth, 17 other mountain and garden huts and three farms were damaged, and around 100 hectares of forest, pastures and orchards were devastated by mud. The road between Sion and Riddes and the Rhone itself were buried.

The Bieudron power plant, which was designed to cover peak loads and has an output of 1269 MW, then failed for several years. After the repairs had been carried out, the plant was put back into operation in January 2010. The operations manager and a person in charge of the tunnel manufacturer were sentenced in August 2008 to a fine on probation for negligent homicide.

The economic loss due to the failure of the generators in Bieudron is of a special kind: it was a loss of power, but not a loss of (energy) production, as the water from the Lac des Dix is ​​still in the existing power plants in Fionnay, Nendaz and Chandoline could be used.

The ownership structure of the power plants that use the water of Lac des Dix is ​​somewhat complex: the Fionnay and Nendaz power plants are operated by Grand Dixence SA , and the Bieudron power plant by Cleuson-Dixence SA . The decommissioned Chandoline power plant and the rights to the old dam from 1934 are managed by Alpiq Suisse AG and the municipalities that granted the concession for this first power plant.

The Grand Dixence SA is one of 60% of Alpiq Suisse SA and each 13 1 / 3  % of the Axpo Power AG , the BKW Energie AG and the Industrielle Werke Basel (IWB). The company in turn holds 45% stakes in Elektrizitätswerk Zermatt AG (EWZ) so that the use of the Zmuttbach can be optimized, 35% in Hydro Exploitation SA , which maintains and operates the power plants of the Lac des Dix, and 68.2% in the Cleuson-Dixence SA and 29% in Force Motrice de la Borgne SA (FMdB), which operates power plants down the valley from the dam.

The Grande Dixence gravity dam was with a height of 285 meters until 1980 the highest dam in the world. In 1980 the Nurek Dam , the highest wall in the USSR (now Tajikistan ), which was 300 meters high, exceeded it. Two walls in China were completed in 2010 and 2014; the 292 m high Xiaowan Dam and Jinping I at 305 meters. Two of these barrier structures are stone embankments , one an arched wall, which means that the Grande Dixence will continue to be the highest gravity dam in the world. A list of the tallest dams can be found in the list of the largest dams in the world .

At the base, the Grande Dixence is 200 meters thick and the crown is 695 meters long. More than 6 million m³ of concrete were used during construction  , the weight of the wall is around 15 million tons. Over 30 km of tunnels have been created inside the wall for maintenance and inspection.

A cable car runs from the foot of the dam to the Krone . The 640 m long run from 1964 is designed as an aerial tramway with cabins for 15 people.

The capacity is around 400 million m³. The reservoir is filled with water through a network of inlet tunnels and pumping stations, which comes from the 75 water catchments in the 375 km² catchment area, in which there are 35 glaciers . The annual amount of water collected is an average of 500 million m³, the majority of which occurs in summer. The lake contains around a fifth of the electrical energy that can be stored in Switzerland .

The main tunnel is supplied with water by the following pumping stations.

Chandoline power station, 1934–1935. Machine room with the original three generators, the remaining generators were installed between 1942 and 1944.

The potential energy from the water stored in the lake is converted into electrical energy in three central units. The Chandoline power plant, which is also part of the system, has been shut down for an indefinite period of time since July 2013 for economic reasons. The Fionnay and Nendaz headquarters have been out of operation since the beginning of summer 2016 because microcracks were found in the pressure pipe above the Nendaz headquarters. All of the water in the reservoir is now only processed in the Bieudron headquarters. All processed water flows into the Rhone .

The standard work capacity of the Bieudron headquarters was 2.2 TWh (2 billion  kWh ) in 2019, making it the Swiss hydropower plant with the largest electricity production. The combined output of Grande Dixence and Cleuson-Dixence is 2.1 GW. To classify these figures, the following information: the Gösgen nuclear power plant has an output of one gigawatt and produced 7.8 TWh in 2019, the total electricity consumption in Switzerland was 57.2 TWh in 2019.

Jean-Luc Godard made his first own film, Opération Béton , in 1954 , which reported on the construction of the Grande Dixence dam. Godard himself worked there as a construction worker to supplement his finances.

After the tower restaurant of the Ostankino TV tower in Moscow, the crown of the dam is the highest area of ​​a structure accessible to tourists in Europe.