The Lac de Cleuson , originally Lac de Saint-Barthélemy , is a reservoir of the Grand Dixence hydropower plant in the municipality of Nendaz ( Conthey district ) in the Swiss canton of Valais , at 2186 meters above sea level. M. lies.

In November 1934 Energie Ouest Suisse (EOS) commissioned the Chandoline power station near Sion . It processed the water from the old (small) Lac des Dix . With the increase in output to 156 MW, an attempt was made to add more water to the Lac des Dix as quickly as possible during the years of World War II , especially to combat the lack of electricity in winter. As early as 1945, the Printze above today's reservoir was taken and fed through a tunnel to the Lac des Dix, which brought an additional 61 GWh. In the next stage of expansion, the Lac de Cleuson was created at the back of the Val de Nendaz and connected to the tunnel of the existing water catchment via a pumping station, which generated another 60 GWh of energy. No resettlements had to be carried out when the lake was dammed. The reservoir will continue to serve its purpose even after the new dam on Lac de Dix has come into operation.

For the construction of the dam was for the transport of cement , a 11.5 km long transport cable car from the SBB -Bahnhof Ardon at the bottom of the Rhone valley to the concrete plant built at the eastern end of the dam. For the first time, the cement was transported in special cylindrical buckets with a capacity of 400 kg, which could easily be transferred from the rail cars to the cable car. The system developed by Transports mécanisés SA from Zurich was later also used at other dam construction sites.

Gravel and sand were extracted locally from the terminal moraine of the Grand Désert glacier and brought to the concrete plant by a 1900 m long cable car. The concrete was placed in the dam with two cable crane systems.

The reservoir is traversed by the Printze, which flows into the Rhone . In addition, the water of the Tortin from the neighboring valley is fed to the lake via a 1.25 km long tunnel. The storage volume of the lake is about 20 million m³, the lake surface covers about 0.50 km². The lake serves as a storage basin and is connected to the Lac des Dix by a pumping station . The maximum quota is 2186 m above sea level. M.

The pump center is located in the interior of the dam at the level of 2110 m above sea level. M. There are 4 pumps installed there with an output of 1400 HP per pump. Together they can convey a maximum of 2.2 m³ per second. The pumps are operated with a voltage of 5 kV. The energy is fed to the pump station via a 20 kV line, where it is stepped down.

The pumps convey the water via a 650 m long pressure pipe to an altitude of 2275 m above sea level. From there it flows through the 1350 m long connecting tunnel Saint-Barthélemy-Cleuson along the right bank of the lake in a southbound direction. The tunnel has a gradient of 2 ‰. The tunnel ends in the 6350 m long Cleuson-Dixence gallery , which leads from the Printze water intake above the reservoir into the Lac des Dix. 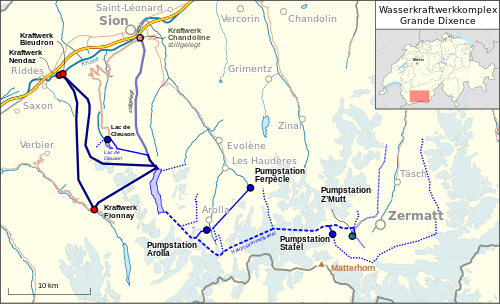 Overview of the Grande Dixence hydropower plant complex. The Lac de Cleuson is located west of the Lac des Dix in the left half of the map.