The city of Sion is about 510  m above sea level. M. in Central Valais on both sides of the Rhone. The old settlement core is north of the banks of the Rhone. It is traversed by the Sionne brook, which is now partially underground.

The area of ​​the old town drops noticeably from north to south and south-west towards the course of the river. This results in a height difference of over 30 meters. The Rhone was pushed slightly in an arc towards the south-east and away from the old town by the pouring cone of the Sionne.

The 611  m above sea level closes in the east of the historic city center . M. high rock Valère and northeast another rock elevation with the fortress ruins Tourbillon 658  m above sea level. M. at. In the west, at a distance of around 1000 meters from the old town, the dominant Mont d'Orge ( 786  m above sea level ) borders the current built-up area of ​​the city. The younger parts of the city around the train station and on the south bank of the Rhone are flat plains made of Quaternary deposits. The regional Sion airport and extensive industrial areas are located on other sediment terraces in the western part of the city .

The land use of Sion is divided into an urban, historical development area of ​​the city, at the edge of which there is preferably a transition to loose development for commercial purposes, furthermore in steep slopes with intensive viticulture and fruit growing and in the river-near level with further agricultural or horticultural areas Investments.

Like all of Valais, Sion has a very mild climate, as it is surrounded by high mountain ranges of the Valais and Bernese Alps . The annual mean is 10 ° C. Hot, dry summers and cold, dry winters are the result. There is a steppe climate, which is why, in addition to vines, various types of cacti also thrive. 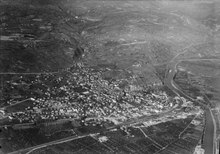 Aerial photo (1955)
→ Main article : History of the Canton of Valais

Excavations have shown that the area of ​​today's Sion was already settled in the Stone Age. The dolmen of Petit-Chasseur (2900–2200 BC) are among the outstanding relics of megalithic construction in the Alpine region. In 2008 one of the largest Celtic necropolises in the Swiss Alps with over 200 graves was uncovered. The graves date from the first Iron Age between 800 and 500 BC. Chr.

When in 15 BC When the Romans had conquered Valais, which was Celtic up to then , a Roman settlement was established on the site of today's city, the Celtic or Roman place name of which has not been passed down. The Latin name Sedunum for customs certainly comes from the Seduner tribe, who once lived in Valais . Presumably the Roman settlement arose on the site of the Sedun oppidum .

In 580 the bishopric was moved here from Martigny , and from 999 the bishop of the diocese of Sion also officiated as sovereign.

On November 13, 1475, near the city, on the “la Planta” field, the Upper Valais and Bernese victorious over the Savoy.

While Sitten was still a bilingual city in the middle of the 19th century (in 1870 over 50% of the population spoke German), French has now largely replaced the German language. Around 70% of Sion residents are French, only 3.8% German and 4.6% Italian as their mother tongue .

The Sion General Council ( conseil général ) consists of 60 members and is composed as follows (as of 2017):

See also : List of the city presidents of Sion

Share of votes in the Swiss parliamentary elections 2019 in the municipality of Sion:

There are several museums in Sion , including a Musée d'art du Valais, a natural history museum, an archaeological museum and the Musée de Valère, which exhibits cult objects, furniture, weapons and uniforms .

The medieval townscape is characteristic of Sion , dominated by the rocks of Valère ( 621  m above sea level ) with the pilgrimage church of Notre-Dame de Valère (12th / 13th century) and Tourbillon ( 655  m above sea level ) with the ruins the former tourbillon bishop's palace from the 13th century. The Basilique de Valère or Basilica of Valeria is the church on the southern of the two castle mounds on the eastern border of the old town. It houses the oldest playable organ in the world, which was built around 1430.

In the old town itself is the remarkable Notre-Dame-du-Glarian Cathedral from the 15th century. It still has a Romanesque tower from the 12th century.

To the southwest of the cathedral is the church of St-Théodule . It was started in 1516 by the builder Ulrich Ruffiner as a late Gothic building, but was not completed until two centuries later. Further to the east is the town hall . It was built in the Renaissance style from 1657 to 1665 and has Roman inscription stones in its staircase. Its tower with its astronomical clock is particularly impressive .

Buildings worth seeing are also:

Many winter sports areas in Valais can be reached from Sion , which is why the city has applied several times to host the Winter Olympics , most recently for the one in 2006. At that time, however, Sion was beaten by Turin’s application ( Torino 2006 ).

In a referendum in the canton of Valais in June 2018, a majority of 53 percent of the voters decided against financial support for the application for the 2026 Winter Olympics in Sion or Sion.

The best-known football club is the two-time Swiss football champion and thirteen-time cup winner FC Sion , which could only be defeated in its fourteenth cup final, in which it took part. In addition, FC Sion is the first team to be the second division cup winner. The ice hockey club Sion HC played regularly in the NLB in the 1960s and 1970s .

The city is considered to be one of the driest in Switzerland and its climate is above average mild. Thanks to its climate , Sion has the third largest wine-growing area in Switzerland after Satigny GE and Chamoson VS. The best- known wines from Valais are the white Fendant (made from the Chasselas or Gutedel grapes) and the red Pinot Noir and the Dôle , a blend of Pinot Noir and Gamay grapes. The largest wine producer in Switzerland, Provins , is also based in Sion.

Other branches of industry

The service sector is mainly focused on tourism .

The WSL Institute for Snow and Avalanche Research SLF has had a branch in Sion since 1995, and there is an SLF research station in Valée de la Sionne .

The Sion station is on the important Simplon line , which in the west of Geneva is both sides of the tunnel in the direction of Milan continues.

A small airport was built a little west of the city .

Sion can be reached via two junctions on the A9 motorway . Hauptstrasse 9 , which touches the city center , runs parallel to this .

The “Smartshuttle” project has been running since June 2016: PostBus AG is testing two autonomous shuttles from the French manufacturer Navya on a 1.5 km long circuit . A ride is possible free of charge.

Political communities in the Sion district