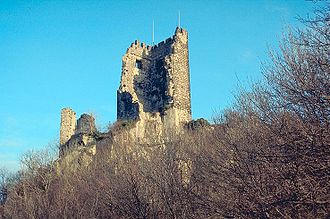 Ruins of Drachenfels Castle in the Siebengebirge on the Rhine

Ruine (from the Latin ruere for "fall", Pl. Ruins ) denotes a crumbling structure . For the remnant of a building that remained standing after a fire or a conflagration , the term `` fire support '' , which is no longer common today, was used in early New High German .

As architectural monuments, ruins are often a cultural asset and part of the cultural heritage. Many ruins have corresponding markings (see International Committee of the Blue Shield ).

Various ruins in Kosovo : a derelict house in front, behind it destruction from the Kosovo war 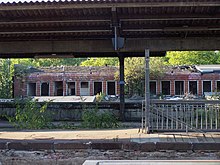 Rear of the ruin of the reception building of the Ostbahnhof in Frankfurt's Ostend , a prominent example of urban decay , September 2008

A ruin arises either through natural decay, if the building is not looked after and maintained for economic, social or political reasons, through violent effects such as war or through natural disasters such as B. the eruption of a volcano (cf. Pompeii ).

Ruins can be left to decay, their remains can be incorporated into the construction of a new structure at the same location, or they can be used secondarily by demolition. The only partial reuse of the materials in a building can result in ruin, for example if the roof covering is removed for reuse and the rest of the building crumbles due to lack of weather protection.

Ruins can also arise when a construction project is finished before completion and is abandoned halfway. One then speaks of a building or investment ruin .

Ruins can also be built in a planned manner. So z. In the 19th century, for example, castles and staffage buildings in palace gardens in the form of artificial ruins , including the Schwarzenstein Castle near Geisenheim , the Magdalenenklause in the Nymphenburg Palace Park in Munich , the Egeria grotto in the Wörlitzer Park ( UNESCO World Heritage Site ) or the Löwenburg in the Bergpark Kassel .

During antiquity and in the Middle Ages , the ruins of destroyed buildings were often used as a quarry for building materials, whereby their material was mostly purely practical, but sometimes also deliberately reused as spoil and clearly visible. The latter happened when the material was particularly valuable or when one consciously wanted to tie in with tradition.

With the Renaissance (around 1500), ancient ruins entered the interest of art and culture . On the eve of the French Revolution , Constantin François Volney made the ancient ruins symbols of political equality.

With the Enlightenment and Romanticism , the medieval ruin also gained in appreciation, because it was discovered as a visible testimony to bygone times with historical significance. The sight of them also offered an emotional clinging to an idealized past in view of the ongoing industrial revolution , which was perceived as threatening . The homage to the aesthetics of decay is also expressed in the English garden art of the 18th century, where parks were laid out as landscape presentations and equipped with artificial ruins .

Numerous ruins of castles , palaces or monasteries gained great, sometimes symbolic, importance in the 19th century. Romantic artists such as Caspar David Friedrich achieved immortal fame for themselves with the depiction of ephemeral ruins ( Eldena Monastery ). 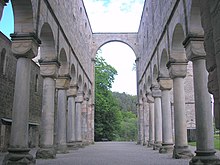 Ruin of the monastery church of Paulinzella 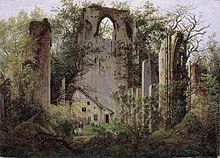 Painting of the ruins of the Eldena monastery in Greifswald , by Caspar David Friedrich

Monastery ruins mostly emerged after the secularizations in the course of the Reformation in the 16th century and at the beginning of the 19th century. They have been a popular subject in painting and drawing, especially since the Romantic era . They symbolize transience and evoke nostalgic feelings . The ruins have been used in various ways by the church over the centuries since they were abandoned. This misappropriation, the Thirty Years War and the use of the building as a convenient quarry resulted in the extensive destruction of many of these monasteries. It was not until the Romantic period of the early 19th century that the buildings were considered and conservation measures began. Today monastery ruins are popular tourist destinations.

On a philosophical level, Georg Simmel's text “Die Ruine” from 1907 is the first attempt to explain what the ruin evokes. Simmel writes: "The ruin creates the present form of a past life, not according to its contents or remnants, but according to its past as such."

Today the value of the ruins is recognized by the monument protection . There is much debate about demolishing or rebuilding ruins. The Frauenkirche in Dresden, the ruins of which were originally intended to stand as a memorial against the war , after the city was rebuilt from ruins, was rebuilt. Other ruins were deliberately preserved as memorials, such as the old Kaiser Wilhelm Memorial Church or the former Chamber of Commerce in Hiroshima , which was destroyed when the atomic bomb was dropped on August 6, 1945.

The symbolism of ruins is also reflected in the title of the national anthem of the German Democratic Republic, Risen from the ruins . New ruins are still emerging today through wars, attacks , natural disasters and the decay of buildings due to economic changes. A typical example of this is the Ostbahnhof in Frankfurt's Ostend. The sarcastic slogan of creating ruins without weapons is intended as an accusation of misguided politics.

Remnants of the foundations of wooden and steel towers

Steel towers that have become dispensable are usually dismantled because the structure is dismantled and rebuilt elsewhere or when the state of construction no longer allows direct recycling, but the metal of the structure can still be economically recycled as scrap. However, the concrete foundations occasionally remain in the ground, as removing them is often quite time-consuming. In Herzberg (Elster) , for example, you can still find the foundation of the transmission mast of the former German broadcaster III .