Claude Lorrain : View from Tivoli to the Campagna Romana in the evening (1644/45).
In the foreground shepherds and goats as accessories.

As accessories (to decorate , "equip", [with clothing] "furnish", "decorate", with the French ending -age ) is generally referred to as accessories or incidental items . 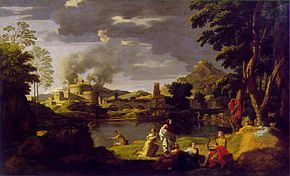 Nicolas Poussin : Landscape with Orpheus and Eurydice (around 1650), Louvre . The figures depict a scene from the story and are therefore not to be regarded as staffage figures.

In painting , people or animals are referred to as staffage or staffage figures if they are secondary elements of a landscape or architectural painting and only or primarily have the purpose of livening up the picture. But staffage figures can also serve to illustrate the proportions and depth of the room. The staffage was particularly popular in Baroque painting . Well-known representatives are Claude Lorrain and Nicolas Poussin . There were also specialists who were responsible for adding accessories to the pictures.

Staffage figures are anonymous figures. If a figure in the painting is known by name and especially if its name is included in the title of the painting, it is not a staffage figure. Figures known by name and anonymous staffage figures can appear next to each other in the same painting. According to contemporary genre theory, the representation of a landscape with at least one biblical or mythological figure named in the title was to be regarded as a history painting, even if it is small figures in a large landscape. Such paintings are often named in the form of landscape with [name] . History paintings were considered to be of higher quality and usually had a higher price than mere landscape paintings .

A staffage building: the Roman ruins in Schönbrunn Palace Park

In garden architecture , staffage describes a small building that is picturesquely placed in the landscape as an eye-catcher. Often it is an artificial ruin or an exotic designed pavilion (for example a Moorish or Chinese pavilion). In English gardening, the term folly is used for this .

In copyright law , the question can arise as to whether, for example, the reproduction of a photograph in a book or on an advertising poster is to be regarded as an accessory (accessory) in a specific case, see accessories .