Painter is a redirect to this article. Other meanings of painters are painters (disambiguation) to find. For the Dutch football player, see Donyell Malen .

The following important information is missing from this article or section:
Time between baroque and impressionism, conceptual painting, non-European painting
Help Wikipedia by researching and pasting it . 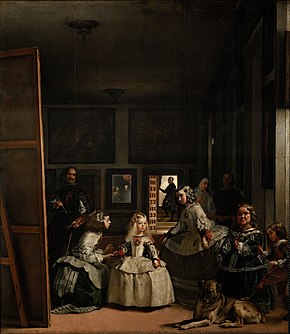 The painting is one addition to the architecture , the sculpture , the graphic and the drawing of the classic genres of the visual arts . While sculpture and architecture produce three-dimensional works, painting, graphics and drawing are usually two-dimensional works. Those who perform painting are referred to as painters or artists . In contrast to drawing, this is done by applying damp colors to a painting surface using a brush, spatula or other tools. These techniques are summarized under the term painting techniques . As a rule, printing techniques are not counted among the painting techniques , even if wet paint is used.

In addition to panel and wall painting, a distinction is also made between glass and book painting as well as painting on clay, ceramics (e.g. Greek vase painting ) or other surfaces (paper, plastic).

The oldest evidence of painting are the cave paintings with depictions of animals from the last Ice Age and the Upper Palaeolithic . These paintings and drawings, as well as reliefs and sculptures , are known as artistic forms of expression from the time between 35,000 and 10,000 years ago. European cave paintings were mainly discovered in Spain and France , such as the murals in the Lascaux cave in southern France in 1940, which mostly show animal motifs. Cattle , deer and horses were depicted in an impressive way and thus belong to the oldest known pictorial motifs of mankind.

Early rock and cave paintings are also known from Africa , Asia and Australia . In the Middle East there is numerous evidence of early paintings as early as the Neolithic . Above all, the emergence of painted ceramics and wall painting should be mentioned here. Numerous remains of prehistoric wall paintings were found in Çatalhöyük in Asia Minor and date to around 6000 BC. Chr.

In the cultures of the Ancient Near East , painting, and probably wall painting in particular , was popular from 10,000 BC. Widespread, but relatively little has survived. Some examples come from the palace of Mari , while only fragments exist from the palaces of the Hittites , but these hardly allow a picture of the painting that once existed. Finally, other examples are known from the Assyrians , especially of wall paintings. The wall paintings of ancient Egypt (from 3000 BC) and the Minoan frescoes in Crete (from 2000 BC ) are of a later date . The painting of the ancient Egyptians is mainly known from wall paintings from burial chapels, from coffins and from the painting of books of the dead .

In the third century AD, the Greek writer Philostratos described painting as an invention of the gods ( Eikones 1 ). This and other statements by ancient authors testify that painting was particularly highly regarded, even higher than sculpture . In ancient Greece, wood was the main image carrier , as well as stone, clay and stucco. The use of ivory, glass and canvas hardly occurs, but only a few remains of ancient Greek painting have survived. After the fall of the Minoan - Mycenaean culture with its high quality fresco painting (for example in Knossos ), Greek wall painting did not resume until the eighth century BC. A.

The number and type of archaeological evidence of Roman painting differ significantly from that of Greek painting. Numerous evidence of Roman wall painting have been preserved , although it is obviously a Roman phenomenon and not just a coincidence of the traditional situation. In his Naturalis Historia (35, 118), Pliny complains about the extensive change from panel to wall painting. Many of these frescoes come from the cities of Pompeii and Herculaneum, which were buried in AD 79 .

The painting of the ancient world survived mainly in the wall paintings of the churches and vignettes of books. In the Middle Ages , illumination was therefore of paramount importance. The panel painting as a painting on an independent surface to be painted - in other words on the wooden plate, then on canvas  - evolved only gradually new.

Until the modern era, European painting was almost exclusively religiously shaped by the church clients. Churches and monasteries were painted and church choirs and devotional chapels were decorated with altarpieces. Other subjects such as portrait painting , genre painting , landscape painting or still life did not appear until the late Middle Ages and in Renaissance painting . 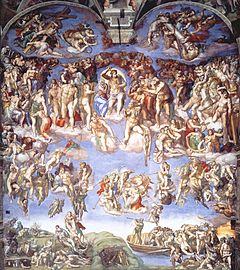 Painting took a significant development in the Renaissance with the sustained further development of the techniques of oil painting , the central perspective , the depiction of allegorical motifs of antiquity and the emphasis on individual characters in the representation of people with the aid of knowledge of anatomy .

Jan van Eyck (around 1390–1441) created independent images and portraits for the first time ; Albrecht Dürer (1471–1528) painted the first known autonomous self-portrait in Europe in 1493 ; Albrecht Altdorfer (around 1480–1538) was the first painter to make the landscape the main theme.

Above all, the Italian painting of the High Renaissance in the cities of Florence , Venice and Rome produced important works by the painters Leonardo da Vinci (1452–1519), Michelangelo (1475–1564), Raphael (1483–1520) and Titian (1477–1576) that are exemplary in perspective, shape, color, expressiveness and painterly brilliance and have had a lasting influence on the visual arts of Europe to this day.

In the 17th century, the beginning of the Baroque era , numerous Dutch painters painted still lifes . Jan Vermeer (1632–1675) was at the same time a master of vedute painting and genre painting . Other important painters in Italy Michelangelo da Caravaggio , in Spain Diego Velázquez and Bartolomé Esteban Murillo , France Nicolas Poussin and Claude Lorrain , and the Netherlands, Peter Paul Rubens and Rembrandt , who as a master of chiaroscuro ( light and shade applies). 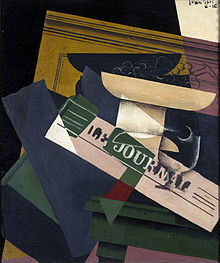 With the advent of photography , painting had to face new challenges and tasks that had an impact on its development in the 19th century . Up until the middle of the 19th century, the pictures were mostly created in artist studios. The Braith-Mali-Museum in Biberach an der Riss houses such original studios.

Important modern trends in the first half of the 20th century are Fauvism , Cubism , Dadaism , Surrealism and the Russian avant-garde . National peculiarities are Expressionism and New Objectivity (Germany), Futurism (Italy), Cubo-Futurism , Constructivism and Suprematism (Russia) and Vorticism (England). Another development of modern art is abstract painting , which in turn takes the form of different styles. Other important styles of the 20th century are tachism and largely after 1950 the Informel . Legendary painters such as Piet Mondrian (1872–1944), Kasimir Malewitsch (1879–1935) and Pablo Picasso (1881–1973) had a decisive artistic influence on painting in the 20th century .

Painting from the second half of the 20th century until today

In the bipolar world of the Cold War , art, and with it painting, took two paths. In the Soviet sphere of influence she was primarily obliged to carry out state propaganda (including socialist realism ). Well-known painters in socialism were Willi Sitte , Bernhard Heisig , Werner Tübke . The western world, on the other hand, continued to play the ideas of modernity into the eighties. There was a constant expansion of the concept of art ( conceptual art , Fluxus , happening ). The classic categories of painting, sculpture and graphics lost more and more weight.

The fifties were largely characterized by abstract expressive or constructive tendencies, which can be summarized under the terms Informel , Tachism , American " abstract expressionism " and concrete art , in which painting still plays an essential role. With the economic consolidation of the western hemisphere and its cultural center New York, the art world split from the sixties into a formalistic branch, minimal art and ultimately conceptual art on the one hand, and pop art on the other. The latter refers to the colorful advertising and media language and thus also builds on the painted and representative image. (including Andy Warhol , Robert Rauschenberg , Roy Lichtenstein , in Germany as “ capitalist realism ” with Gerhard Richter , Sigmar Polke ).

Parallel to this development, the interface between painting and photography, which were largely separate at that time, was closed in the early 1970s with the work of the photo artists Pierre Cordier ( chimigrams ) and Josef H. Neumann ( chemograms ). In 1974, Josef H. Neumann's chemograms closed the separation of the painterly ground and the photographic layer, in that, in a symbiosis that had never existed up to that point in time, they were unmistakably unique in a simultaneous painterly and real photographic perspective within a photographic layer in colors and Forms united.

The rapid change of different styles ( action painting , op art , photo-realism , hard edge etc .; see also styles in painting ) came to an end in the eighties with the arrival of postmodernism , at the same time the " new wild ones " (including Jörg Immendorff , Walter Dahn , Kurt Schulzke , Albert Oehlen , Markus Oehlen , Salomé ; Georg Baselitz , AR Penck and Markus Lüpertz come from an older generation, but gained in importance at that time) and the " Transavantgarde " (including Sandro Chia , Enzo Cucchi , Francesco Clemente ) for a renaissance of the expressive painted image.

The confrontation with the new digital media shaped the tendencies of the nineties, while the fall of the Berlin Wall in 1989 also prepared the ground internationally for young painters who had received their training at universities in Leipzig, Berlin and Dresden and later on at the turn of the millennium were partly summarized under the term “ New Leipzig School ” (especially Neo Rauch ). The first decade of the 21st century was primarily concerned with a partly mythologizing reappraisal of the past century (e.g. Jonathan Meese or Andy Hope 1930 ). The painted picture became more and more a stylistic device among many to convey the artist's message. Discussion no longer counted here, be it figurative, expressive, or constructive . Other important painters after 1945 were Frank Stella , Barnett Newman , Jasper Johns , Asger Jorn , Martin Kippenberger , Jackson Pollock , Günther Förg , Wolf Vostell , Imi Knoebel and Anselm Kiefer .

From a sociological point of view , the broad mass of painters particularly often belong to the working poor , that is to say to those people who live in poverty despite work.

The basic elements of paintings are the intensity, the color and the hue and the rhythm. In the case of paintings of contemporary art, non-traditional basic elements are also described. The intensity of a painting is defined by shading, contrasting and the use of neighboring elements with different color intensities. The juxtaposition of picture elements with the same color intensity can only produce symbolic differentiation. The perception of color and hue is subjective, but can produce culturally different psychological effects. The color black is more likely to be associated with mourning in the west, while the color of mourning in the east is white. There are numerous theories of color theory by well-known artists, scientists and authors such as Goethe , Kandinsky and Newton . The rhythm is abstractly defined in the picture as a pause within a sequence and describes the distribution of shapes, colors and shades. The non-traditional basic elements were introduced by modern artists and include techniques that are not covered by the traditional basic elements. These are e.g. B. collages or the use of materials such as sand, straw or wood to give textures.

The preferred painting techniques in ancient times were encaustic and tempera painting . It was painted on wood, clay ( vase painting ), stone or on the fresh plaster (see fresco painting ). Due to the small amount of archaeological evidence, the color spectrum of antiquity can only be reconstructed very inadequately. However, it has been observed that the colors red and blue have retained the best.

The evangelist Luke is the patron saint of painters.