Sigmar Polke (born February 13, 1941 in Oels , Lower Silesia , † June 10, 2010 in Cologne ) was a German painter and photographer . His painting can be assigned to post-modern realism ( capitalist realism ) and quotes modes of expression from Pop Art without being assigned to this style. His approach to painting contains strong ironic elements.

After the family was expelled from Lower Silesia to Thuringia in 1945, they fled the GDR to West Berlin in 1953 and then moved to Willich near Mönchengladbach . From 1959 to 1960 Polke completed an apprenticeship in glass painting in Düsseldorf-Kaiserswerth . In 1961 he began studying with Gerhard Hoehme and Karl Otto Götz at the Düsseldorf Art Academy , which he finished in 1967. 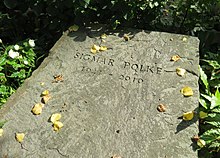 In 1963 he founded together with Gerhard Richter and Konrad Lueg the Capitalist Realism , a style of art that the conception and realization of the action Living with Pop - A Demonstration for Capitalist Realism began. Together with Richter, Lueg and Manfred Kuttner , Polke also had his first public exhibition in May of the same year in Kaiserstraße 31A in Düsseldorf. From 1970 to 1971 he was visiting professor at the University of Fine Arts in Hamburg and between 1977 and 1991 professor at the same university. Polke lived and worked for six years from 1972 in Willicher Gaspelshof , where a kind of “artist community” developed together with changing artist friends and guests. In 1978 he moved to Cologne . From 1980 to 1981 Polke made trips to Southeast Asia, Papua New Guinea and Australia.

Sigmar Polke took part in Documenta 5 in Kassel in 1972 in the Individual Mythologies department . He was also represented as an artist at Documenta 6 (1977) and Documenta 7 (1982). In 1982 he took part in the group exhibition Zeitgeist , in 1984 in the exhibition From Here - Two Months of New German Art in Düsseldorf and in 1988 in the exhibition Made in Cologne . Polke promoted the pop-art artist Memphis Schulze in his early years.

Polke received his largest public contract with the renovation of the stained glass windows of the Zurich Great Minster , which he was awarded in 2006 as part of an artist competition. The five glass and seven agate windows were completed in November 2009 and opened to the public.

Polke was the youngest brother of the sculptor Wilfrid Polke and the theologian Johannes Polke . He died of cancer on June 10, 2010. His grave is in the Melaten cemetery in Cologne .

In 2018 his daughter Anna Polke (* 1964), a studied actress, founded a foundation for the scientific research of the life's work of her father Sigmar Polke.

The Cologne Museum Ludwig owns the largest collection of Sigmar Polke's editions in Europe as a gift from the Cologne collector Ulrich Reininghaus. These are predominantly works on paper (screen and offset prints, simple copies, photographs, artist books, posters and invitation cards), including numerous overpaintings and thus unique items .

Up to around US $ 27 million have been paid for his works on the art market .