Georg Baselitz (born January 23, 1938 in Deutschbaselitz , Saxony ; real name Hans-Georg Kern ) is a German painter , sculptor and graphic artist . He became internationally known in the 1970s for his figurative, expressive paintings. Baselitz's artistic influences stem from a variety of inspirations, such as illustrations from the Soviet era , mannerist prints and African sculptures. The destruction and suffering of the Second World War had a lasting influence on the artist. In this context, Baselitz stated in an interview: “I was born into a destroyed order, into a destroyed landscape, into a destroyed people, into a destroyed society. And I didn't want to introduce a new order. I had seen more than enough so-called orders. I was forced to question everything, had to be 'naive' again, to start over. "

The theme of destruction, along with other autobiographical facts, recurs in many of his works. Disrupting orders and conventions of perception with the help of painting has since been an important leitmotif in Baselitz's work. Since 1969 he has been painting his motifs upside down, which helped his breakthrough and makes his works unmistakable to this day.

Baselitz was born as Hans-Georg Kern in the school in Deutschbaselitz , built in 1931 , where his father was a teacher. The now framed windows mark the former teacher's apartment.

Georg Baselitz was born as the second child of a teacher couple. After childhood, school and A-levels in his homeland in Upper Lusatia , he began studying painting at the University of Fine Arts in Berlin-Weißensee ( East Berlin ) with Herbert Behrens-Hangeler and Walter Womacka in 1956 . Here his individual personality was already evident, which did not correspond at all to the socialist ideas of the GDR . After two semesters, this led to her expulsion from the university because of “socio-political immaturity”. He then continued his studies in 1957 at the West Berlin University of Fine Arts under Hann Trier and finally moved to the western part of the city in 1958. Here Georg Kern increasingly dealt with the theories of Wassily Kandinsky , Ernst Wilhelm Nay and Kasimir Malewitsch . He traveled to Paris and Amsterdam and studied Antonin Artaud , Jean Dubuffet and the art of the “mentally ill” ( Prinzhorn Collection ).

In 1961 he took the stage name Georg Baselitz, based on his place of birth. Together with his colleague Eugen Schönebeck , he designed an exhibition in Berlin and published the (later so-called) 1st Pandemonic Manifesto , in 1962 the two published the actual Pandemonium ( 2nd Pandemonic Manifesto ). But even in the Federal Republic of Germany his works did not correspond to social values ​​and norms, which led to a scandal in 1963. His pictures The Big Night in a Bucket and The Naked Man at his first solo exhibition at the Werner & Katz gallery in Berlin were the subject of a deliberately staged scandal that only subsequently led to the confiscation by the public prosecutor, which is said to have been initiated by an art critic who was friends with the gallery owner - a case of self-fulfilling prophecy .

In the spring of 1965 Baselitz received a scholarship from the Villa Romana in Florence. In 1969 he painted his first picture with The Forest on the Head, consistently reversing the motif. This was followed by the first exhibition in 1970 at the Franz Dahlem gallery in Cologne , in which only “upside down” pictures were shown. In 1971 he moved to Forst on the Weinstrasse . Four years later, in 1975, he acquired the listed Derneburg Castle near Hildesheim . In 2006 Baselitz sold Schloss Derneburg to the US financial investor and art collector Andrew J. Hall and moved to Buch, a district of Inning am Ammersee in Upper Bavaria.

Baselitz has lived in Salzburg since 2013 . Here he and his wife Johanna Elke, née Kretzschmar, (married in 1962) received Austrian citizenship on May 27, 2015 for extraordinary achievements for Austrian art and his generosity towards Austria's museums. Georg Baselitz is the father of gallery owners Daniel Blau and Anton Kern.

In July 2015, it became known that Baselitz wanted to withdraw his loans from German museums in protest against the planned tightening of the German Cultural Property Protection Act . At this point in time, the amendment was accused of placing museum collections in their entirety under export protection.

Baselitz shaped modern painting from 1960 onwards with his works. With some obscene depictions, especially in the early 1960s, he had a very provocative effect , but only after he had to leave the Berlin-Weißensee School of Art in 1957 due to "socio-political immaturity" because he did not go to a combine as ordered, but rather painted pictures after Picasso .

During his stay in Florence in 1965, Baselitz developed the work group Der Helden or New Types, which ended the following year in Berlin with the work The Great Friends ( Museum Ludwig , Cologne ). Around 60 paintings, 130 drawings and 38 prints were created within a year. The paintings in this group of works are characterized by a coarse painting style and strong application of paint and are largely executed in the format 162 × 130 cm. They show a monumental figure standing mostly in a barren landscape, injured and partially bare. Twenty years after the Second World War , the hero images dealt with male heroism: These figures relate in a figurative sense to an image of a man who, without nationality and no local affiliation, destroyed the illusory and megalomaniac ideals of the Third Reich and the GDR with his desolate and upset the ragged apparition. Baselitz's own biography and world - between communism in the east and consumerism in the west - found their way into the picture.

The images of the heroes were almost completely unified and shown in an exhibition at the Städel Museum in Frankfurt in 2016 . Other stations of the exhibition were the Moderna Museet in Stockholm (2016/2017), Palazzo delle Esposizioni in Rome (2017) and the Guggenheim Museum Bilbao (2017).

In the mid-1960s, Baselitz began to break up the motifs into strips and reassemble them; his so-called fracture pictures . Among other things, this led to the reversal of the motif in 1969 with his picture The Forest on the Head . 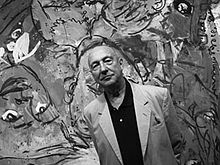 Images that are "upside down"

With these “upside down” pictures, Baselitz became famous around the world from the mid-1970s. His works hung and hang at almost all well-known international exhibitions and museums. As in his earlier works, he wanted to show the viewer the independence of painting from conventional reality. By turning his representations around, he took away the conventionally conceived content of the picture, thus rendering the subject of the picture non-representational and thus abstract. By turning his works upside down, he was able to confront the viewer directly with the organization of color and form on the picture surface, undisturbed by the personal content of the picture. Created in this way, empty of content, Baselitz's pictures cannot be interpreted, but only viewed. The artist counts Pablo Picasso , Alberto Giacometti , Joseph Beuys and also the expressionist painters of the Brücke artists' association among his models.

It is significant here that Baselitz already composes the picture upside down and then executes it just as painterly. Baselitz has been painting on loose canvas lying on the floor since the 1990s and traces of paint pots or shoe prints can also be found in the pictures. Since it is difficult for Baselitz to reach all areas of the canvas evenly when working due to the size of the formats, he simply walks over it.

Between 1998 and 2005 he created more than 60 Russian pictures . He alienated a number of images of socialist realism known to him from his youth in the GDR. They were exhibited in the Deichtorhallen in Hamburg in 2007/2008 .

Graphic prints have accompanied Baselitz's painterly and graphic work since 1964. He started with etchings , in 1966 he added monochrome or multi-colored woodcuts and since 1977 he has also been making large-format linocuts . It is sometimes the image motifs of his paintings and drawings that the artist takes up within the various graphic media in order to subject them to a graphic “coding” or “encryption”. Georg Baselitz owns an extensive collection of prints from the 16th century.

Baselitz made his debut in 1993 as a set designer for Harrison Birtwistle's opera Punch and Judy at De Nederlandse Opera in Amsterdam , followed in 2013 by the set design for György Ligeti's “Le Grand Macabre” for the Chemnitz Opera, and the costumes were designed by John Bock . Baselitz designed the equipment for Richard Wagner's Parsifal for the 2018 Opera Festival of the Bavarian State Opera in Munich . For this he was awarded the negative “Annoyance of the Year” award in the opera world critics' survey .

Motifs from Baselitz's paintings can partly be found in his sculptures and also establish art-historical and biographical references. The first sculptures were created in 1979/1980 from roughly processed wood painted with oil or tempera. For large woodwork, chainsaws serve as his hand tool. The wooden sculptures are often cast in bronze for reproduction or for setting up outdoors.

According to Baselitz, his pictures are not created through the interpretation of an object. Every artist has to discard the previous pictures. Baselitz begins his pictures with disharmony (chaos, handicaps, breaking taboos, radicalism). Surprisingly, there is harmony in his works. The picture must contain what has not been seen before.

When it comes to changing, Baselitz does not stop at his own “older” pictures. In his “remix” phase, he creates pictures that he painted earlier in a better, more timely and sharper way, so to speak from a new perspective.