The State Academy of Fine Arts in Karlsruhe with around 300 students one of the smaller German universities for Visual Arts . It is subordinate to the Ministry of Science, Research and Art of the State of Baden-Württemberg . The classes of the former Freiburg branch moved to Karlsruhe at the beginning of the 2017/18 winter semester.

History of the academy

Postcard from the "Kunstgewerbeschule" from 1909 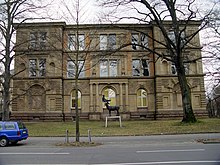 Main building of the State Academy of Fine Arts Karlsruhe, Man with Deer by Stephan Balkenhol

The origins of the art college go back to the year 1854 and the establishment of the Grand Ducal Badische Kunstschule Karlsruhe by the then Prince Regent and later Grand Duke Friedrich I of Baden . The first director was the Düsseldorf landscape painter Johann Wilhelm Schirmer . Both as an educator and as a reformer with administrative skills, he developed a progressive teaching program for the “Grand Ducal Art School”. Not only was landscape painting, which was regarded as avant-garde in the 19th century, encouraged, but a wide range of artistic disciplines was also sought. Historical artistic personalities such as Karl Friedrich Lessing , later Hans Thoma and, after the Second World War, Erich Heckel worked alongside others as teachers.

On October 1, 1885, the “ Grand Ducal School of Painters in Karlsruhe ” was opened under the patronage of Luise von Prussia . Women interested in art were denied entry and thus a study of art at the Grand Ducal Badische Kunstschule Karlsruhe . In 1889 a studio building was built on the academy's property at Reinhold-Frank-Strasse 65 (Westendstrasse 65), in which the school for women painters and the radierschule were housed. Many of the academy's teachers also taught the ladies. From 1919 the academy gradually opened to women and the school for women painters stopped teaching in 1923.

In 1920 the art school merged with the arts and crafts school. The academy, which was now renamed the “Badische Landeskunstschule”, acquired particular importance as a center of New Objectivity before the National Socialist regime interrupted the reform efforts. Well-known artists of this era such as Rudolf Dischinger , August Babberger , Karl Hubbuch , Georg Scholz and Wilhelm Schnarrenberger were dismissed from their teaching post without notice in mid-1933 and their works of art were defamed as " degenerate ".

After air raids destroyed large parts of the academy building in 1942 and teaching was severely restricted, teaching was discontinued in 1944. In the winter semester of 1947/48 the reopening of the initially "Baden Academy of Fine Arts" took place. From 1956 the academy also had a branch in Freiburg. For the 2017/18 winter semester, the two painting classes were relocated to Karlsruhe. In 1961 the university, dubbed the "State Academy of Fine Arts Karlsruhe", received a rectorate constitution. At the same time, in the course of a reform, it was decided not to include the applied areas in the curriculum and to concentrate on free art (painting, sculpture, drawing). Since then, only visual artists and art teachers have been trained for the upper school level . The first elected Rector Gaensslen was followed by the sculptor Hans Kindermann , the painters Harry Kögler , Klaus Arnold and, from 1988, the art historian Andreas Franzke . The painter Erwin Gross headed the academy from autumn 2000 to August 2012, for two terms in office . Ernst Caramelle was appointed as his successor on September 1, 2012. From September 1, 2018, Harald Klingelhöller will take over the management of the Academy as Rector.

For many years, the Karlsruhe Academy was primarily regarded as a "painting academy". Georg Baselitz and Markus Lüpertz represented the neo-expressionism of the 1980s . Sculpture, however, always had its justification. In addition to the 13 painting and graphic arts classes, there are three sculpture classes. Two courses of study are offered: fine arts and teaching for teaching at high school. Student teachers have to study an additional scientific minor. From the 2018/19 winter semester, the Intermedial Design (IMG) expansion subject was set up in cooperation with KIT Karlsruhe.

The technical and artistic training takes place in the workshops.

The training of around 300 students takes place in a joint class. Theoretical courses in art history and didactics as well as art and theory complement the practical course.

Two painting classes and a sculpture class from the art academy are housed in Scheibenhardt Castle.

The sculpture studios are located on Scheffelplatz, where the Karlsruhe Academy was originally located.

The rooms in Karlsruhe are spread over four locations - the main building in Reinhold-Frank-Straße ( Weststadt ), the so-called Sculptor's Garden with its buildings in Bismarckstraße and the Scheibenhardt Palace on the outskirts. The administration and library are located in a Wilhelminian style villa near the main building. At Jahnstrasse 18, the Schönleber Villa , there are studios, the rooms for educational sciences, the photo workshop and the communication department.