Erich Heckel at the easel - portrait of Ernst Ludwig Kirchner

Erich Heckel was the son of a railway engineer. First he began to study architecture in Dresden. Originally, he had more literary inclinations, but eventually trained as a self-taught painter and graphic artist.

In June 1905, Heckel founded the artist group Brücke with Ernst Ludwig Kirchner , Karl Schmidt-Rottluff and Fritz Bleyl (who left in 1907) in Dresden , to which Max Pechstein later joined , Emil Nolde for a short time and Otto Mueller from 1911 . From then on a lively exhibition activity began. In the following years the group won so-called passive members such as Gustav Schiefler and Rosa Schapire , who stood up for them and were the first buyers of their works. The passive members received the annual Brücke folder with original graphics.

From 1907 to 1910 he spent a long time with Schmidt-Rottluff in Dangast on the North Sea; In 1909 he traveled to Italy. In Dresden he temporarily entered into a close studio partnership with Kirchner. The studio served him as a designed space in which he attempted the utopia of a unity of artistic work and life. From 1909 to 1911 he spent summer stays at the Moritzburg ponds near Dresden with Kirchner, and occasionally Pechstein, as well as with friends and models . Her subject was the act of free movement in the great outdoors. During this time a distinctive group style developed.

Heckel spent the summer of 1911 with the dancer Sidi Riha in Prerow on the Baltic Sea in the "Landhaus Dorneneck" on Grünen Strasse. At the same time Marianne von Werefkin and Alexej Jawlensky , who belonged to the Neue Künstlervereinigung München , were only a short distance away . They lived in the former "Villa Seestern" on Waldstrasse.

In autumn 1911 he moved in with his future wife Milda Frieda Georgi (stage name as dancer Sidi Riha, marriage 1915) and moved to Berlin, where modern art was concentrated in Germany and where the decisive battles for direction were fought, from which Expressionism emerged victorious . The year 1912 saw encounters and friendships with other artists such as Lyonel Feininger , Franz Marc and August Macke . The Brücke artists took part in the large Sonderbund exhibition in Cologne, where they were able to present themselves together with the great French painters of modernism.

In May 1913 the artist group Brücke disbanded. Heckel's first solo exhibition followed at Fritz Gurlitt's in Berlin. In the same year a lifelong friendship began with the young art historian and collector Walter Kaesbach . In June 1913, Heckel found the place on the Flensburg Fjord (the little village of Osterholz ) where he would spend the summer and autumn months in the future. In 1914 he stayed for a long time with the painter Heinrich Nauen in Dilborn on the Lower Rhine. After the beginning of World War I , he trained as a nurse. Together with several other painters, he did medical services in Flanders , mostly in Ostend . There he met Max Beckmann and James Ensor . Thanks to a clever division of duties, he had the opportunity to do relatively continuous artistic work.

In 1915 he painted the so-called Ostend Madonna on two tent sheets for the Christmas party of the wounded , which was on loan in the Berlin National Gallery ( Kronprinzenpalais ) until 1937 (burned in 1945). After the end of the war in 1918, he became a founding member of the “Labor Council for Art”. He later became a member of the Nationalgalerie's buying committee, which enabled him to stand up for the interests of his former companions. In 1919 he moved into a studio apartment at Emser Strasse 21 ( Berlin-Wilmersdorf ); In Osterholz he bought a small farmhouse and built a roof studio, where he also made wall paintings on wood, which later fell victim to renovation work. Heckel used the opportunity to work on the Baltic coast for a few months every year up to 1943.

By Ernst Morwitz , a lawyer and poet who's closest circle around Stefan George belonged and was friends with the Heckel since the war, new acquaintances were with people from the circle of friends of the poet. In 1922 he was commissioned to paint a room in the Angermuseum in Erfurt with a cycle of murals using Secco technology. Its title: stages of life . It is the only mural by the Brücke artists that has survived to this day. Since 1920 he has been going on annual work trips with a wealth of watercolors: the Alps, southern France (1926, 1929), Italy, numerous German landscapes and, in the early 1940s, Carinthia, for example. In 1931 a large Heckel retrospective was held in the Kunsthütte Chemnitz.

By signing the “ Appeal of the Cultural Workers ” of August 19, 1934, he publicly stated that he was “one of the Führer’s allegiance”.

From 1937 onwards, Heckel was banned from exhibiting. In the course of the “ Degenerate Art ” campaign, 729 of his works were confiscated and removed from German museums. Losses are also due to the burning of pictures on March 20, 1939 in the courtyard of the main Berlin fire station , during which a total of 1,004 paintings as well as 3,825 watercolors and graphics by various artists were destroyed. In January 1944, Heckel's studio in Berlin, along with numerous works, was destroyed by a bomb attack. Shortly after the end of the Second World War, some of the outsourced paintings in the mine in Neustaßfurt were also lost through arson.

Time in Hemmenhofen on Lake Constance

After a makeshift accommodation with friends, Heckel found refuge in Hemmenhofen on Lake Constance in September 1944 , where he moved into the summer house of the Ravensburg architect Heinrich Johann Wurm (1895–1984), located directly on the lake . After the end of the war, Heckel received various requests and offers to return to Berlin and take on a teaching post at the University of the Arts , but he refused and stayed there until the end of his life. From 1949 to 1955 he was given a teaching position at the Academy of Fine Arts in Karlsruhe , where he taught among others Peter Dreher and Klaus Arnold .

From 1952 to 1960 Heckel was a regular board member of the German Association of Artists , then a member of the honorary board until 1969.

From 1954 to 1965 he regularly worked in the mountains of the Upper Engadine , but also again on the north German coasts, especially on Sylt. In 1955, Erich Heckel was a participant in documenta 1 in Kassel . Several large retrospectives were organized on the occasion of his 70th and 80th birthday. Various public honors followed.

Erich Heckel's work spans six decades. In 1964 the oeuvre catalog of his prints (Dube) was published and in 1965 a monograph by Paul Vogt with a list of his paintings. In the last years of his life, he gave a large part of his work in the form of donations and foundations to public collections, especially to the newly founded Brücke Museum in Berlin.

The style of his early, impasto paintings was inspired by Vincent van Gogh and French post-impressionism . From 1908/09 a transition to flat painting with liquid colors can be observed. A distinctive group style was achieved around 1910, but this was abandoned in favor of pictorial solutions that were more in line with one's own temperament until the "Brücke" was dissolved. The pure colors are broken, the forms angled. A need for psychological penetration of the figures can be felt.

In printmaking (woodcuts, lithographs and etchings) Heckel found a high degree of independence very early on. Some of his woodcuts are among the strongest achievements of German Expressionism.

After the First World War, he developed a new, cosmopolitan classicism, which goes hand in hand with a greater closeness to nature and a lightening of the palette. The picture structure solidified, the landscape watercolor, worked through in terms of the picture, became the preferred genre. City and port images emerge. In addition, he continuously developed the theme of the nudes on the beach until the 1930s. During this time, he also made flower still lifes with complex picture backgrounds.

In the later work one notices a stronger concentration on the flatness of the picture, a further dampening of the coloring. The ornamental autonomy of the image is given more weight than the reproduction of the immediate visual experience. 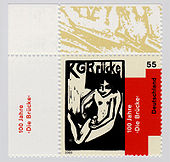 Postage stamp of the Federal Republic of Germany 2004 , 100 years of the bridge : Sitzende Fränzi

From the rich collection of graphics (a total of 1073 registered titles) only a few of the best-known woodcuts are listed, all in the Folkwang Museum , Essen, and the Brücke-Museum , Berlin.

As part of the series “ German Painting of the 20th Century ”, a 200-Pfennig special postage stamp was issued in 1994 by the German Federal Post Office with the motif Landscape near Dresden .