This article deals with the town of Döbeln in Saxony, for the noble family of Döbeln see Döbeln (noble family) . 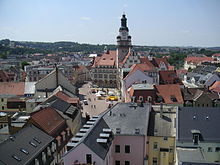 Döbeln is a large district town in the Saxon district of central Saxony . It is also known as the boot city . Döbeln is the second largest city in central Saxony with around 24,000 inhabitants.

Döbeln is located in the central Saxon hill country in a wide basin of the Freiberg Mulde , roughly in the middle of the triangle between the Saxon metropolises of Chemnitz , Dresden and Leipzig . The area is characterized by the Muldental, the lower Zschopau and the surrounding hilly landscape. The Zschopau flows into the Mulde near the Schweta district.

The state capital Dresden is around 50 km away, Chemnitz around 40 km, Leipzig 70 km and Berlin around 200 km. Döbeln has two motorway exits on the A 14 motorway , Döbeln Nord and Döbeln Ost.

Döbeln has a traditional city center, the central part of which is on the Muldeninsel and is surrounded by two arms of the Freiberg Mulde.

The region around Döbeln has been Slavic , settled by Sorbs , since the 8th century . The name comes from the Old Sorbian word Doblin , which is derived from a person's name, Dobl .

The beginnings of German rule in the 10th century and subsequent settlement are associated with the Liudolfingers (also called Ottonians ), in particular with Heinrich I.

After 929, a former Slavic rampart on the castle hill was converted into a German fortification for Döbeln Castle , as the center of a castle wards that belonged to the Meissen region . At the foot of the castle hill there was a settlement that later became the town of Döbeln (1350 civitas ). A document from Emperor Otto II from 981 shows that he donated Doblin Castle and the surrounding land to Memleben monastery; it is about the large region between the Zschopau and the Große Striegis . This is the first documented mention of Döbeln (981).

Already in Slavic times there was a central rulership center in the Gau Daleminze . With the German settlement, German "administrative structures" ( feudal rule and Christianity with its institutions, the parish system and the official church ) were taken over. The German settlement of the place probably developed around 1200 to a communally constituted city (with certain own rights).

In 1350, for example, an independent districtus Döbeln is named, and in 1378 the castle and town are mentioned. In 1567 there is a report of a desolate mountain of the official castle. The reasons are not known, in 1588 the Döbeln office, which existed until then, was integrated into the Leisnig office . The castle, which had obviously fallen into disrepair for a long time, was no longer needed and was used to extract building material. From 1730 the keep was also demolished and between 1867 and 1869 the last remains of Döbeln Castle had to give way to the Schloßberg School.

At the foot of the mountain there is still the Nicolaikirche , the previous building of which was probably built around 1230. After a fire in 1333 a three-aisled basilica was built, which was converted into a three-aisled hall church in 1479 . 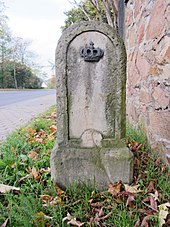 In the 3rd Silesian War ( Seven Years' War ), the battle near Döbeln was the only known military conflict in the immediate vicinity of the town of Döbeln. After Prussian and Austrian troops had dug themselves into the Freiberg Mulde between Technitz and Niederstriegis since autumn 1761 , the Prussians under Prince Heinrich of Prussia broke through the Austrian positions on the early morning of May 12, 1762 . The day ended with a complete victory for Prince Heinrich, large numbers of Austrian prisoners were taken, including the Commander-in-Chief General von Zedtwitz .

In the 19th century the old cloth making emerged into cloth manufacturing. The last cloth factory in Döbeln ended its existence before Christmas 1902 when production ceased. In 1846, cigar manufacturing was also started . In 1847 the Chemnitz-Riesaer Eisenbahn reached the city from Riesa , but the continuation of the connection to Chemnitz could not be opened until 1852. The Dresden – Döbeln – Leipzig line followed in 1868 . Since then, the Döbelner (main) station has been a wedge station . Furthermore, industrialization brought about the Oschatz – Mügeln – Döbeln narrow-gauge railway (from 1884), the Döbelner tram (from 1892, now a historic horse-drawn tramway ), the Großbauchlitz mill railway (1905) and the Wilsdruff-Döbeln narrow-gauge railway (around 1911).

At the end of the Second World War on May 6, 1945, the almost intact city was occupied by the Red Army .

During the floods in August 2002 , the historic city center, which is located on an island in the two arms of the Freiberg Mulde, was completely flooded and many houses were destroyed. The Muldeninsel and the other flooded areas have now been restored. In June 2013 the city was hit again by a flood of similar magnitude .

On August 1, 2008 Döbeln lost its function as a district town in the course of the district reform and was given the status of large district town in this context . The former district of Döbeln belonged to the administrative district of Leipzig , but the current district of central Saxony was part of Chemnitz until the establishment of the Saxony regional directorate on March 1, 2012 . On March 1, 2017, the 85-year-old Ruth K. was killed in a fire set by right-wing extremists in a prefabricated building district on the outskirts of Döbeln.

The name Döbeln goes back to a personal name dobl (a) or dobel (a) . Comparable word stems in Slavic languages ​​mean strong, capable , also good .

→ Main article : List of the incorporations in the town of Döbeln 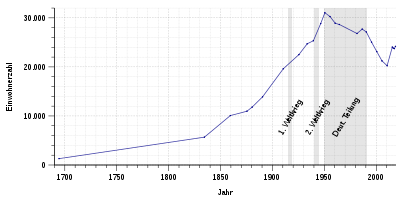 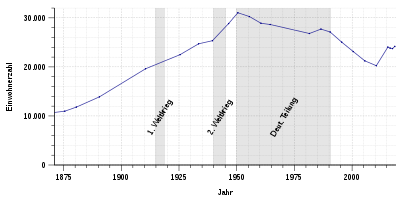 Population development of Chub according to the table below. Above from 1694 to 2018. Below an excerpt from 1871 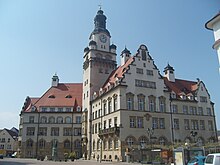 The Lord Mayor is Sven Liebhauser (CDU). He was elected on May 26, 2019 with 65.7% of the valid votes for an initial term of seven years. He is an additional member of the city council and its chairman and head of the city administration.

Blazon : in gold a silver-grooved black battlement wall with three closed golden gates; on the wall three black towers of different shapes, each with two golden window openings, red roofs and golden knobs; a right-waving red flag between the towers.

Symbolism: The wall represents the former medieval city fortifications. The city gates symbolize the upper, lower and Staupitztor. The middle higher tower is supposed to point to the castle. The coat of arms has been valid in this form since 1992. The previous similar coat of arms, valid from 1894 to 1992, only had blue towers. 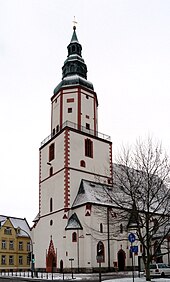 In Döbeln there is a venue for the Central Saxon Theater , which until 2008 also housed a youth theater ("Jugendtheater Döbeln eV").

The city museum was housed in the tower of the town hall on Obermarkt in 1997. The German Horse Railway Museum was opened in 2009.

Döbeln is characterized by many restored town houses in the city center. The town hall on Obermarkt was built in 1912. Also worth seeing are the Schloßberg on the Muldeninsel and the late Gothic town church of St. Nicolai with its high altar and miracle man , whose historical origins go back to 1230. Other interesting buildings include the so-called Rotunda Building or Dome Building at the end of Burgstrasse, which was built in 1937/1938 for the metal and lacquerware factory Johannes Großfuß according to a design by the architect Wilhelm Kreis and is remarkable for its clear architecture. On the Staupitzberg, a 239.5  m high elevation on the outskirts of chub, is the under monument protection standing so-called Holländerturm , who in 1900 as a lookout tower was built. The 30 meter high tower owes its name to a Dutch windmill that used to stand next to its location , of which only the stump of the tower remains today. Next to the entrance to the former upper cemetery there is a royal Saxon post milestone on Dresdner Straße ( B 175 ) from the period from 1859 to 1865.

Since 2001 there has also been the boot fountain created by Vinzenz Wanitschke in the city . “Boot city” is called Döbeln because of the largest historical giant boot in the world up to 1996, which was made by Döbeln shoemakers in 1925 for the 600th anniversary of their guild with a height of around 4.60 meters. In 1937 it became the property of the town of Döbeln and was in the town hall and in the Wappenhenschstift town museum. It was often the main attraction at festivities in many cities, including the Leisniger Heimatfest in 1957. After its “last trip” to the 850th anniversary of the city of Zwickau in 1968, the boot remained on loan at the Mildenstein Castle District Museum. After a total of 53 years at Mildenstein Castle in Leisnig, it was installed on March 29, 2010 in the corridor of the 2nd floor of the Döbelner town hall. After the restoration of the giant boot, it can be found in the large meeting room of the town hall since 2012.

In the "Boot City Döbeln" there are regular boot festivals at which boot parades are held. Once a year the boot queen is elected. 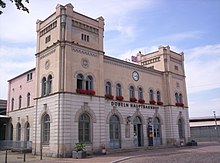 Due to its central location in the middle of Saxony, different lines of three transport associations meet in Döbeln: MDV (Leipzig – Döbeln), VVO (Meißen – Döbeln) and VMS (other public transport lines). The Leipzig – Coswig and Chemnitz – Elsterwerda lines cross at the Döbelner Hauptbahnhof , each of which was served by DB Regio every hour. In December 2015, however, the train service in the section Döbeln Hbf – Meißen was canceled. The replacement buses (line 416) to Meißen only run a few times a day and are almost never used. Another alternative via Nossen is very unreliable, as the buses of the VVO line 424 use the often stowed A4 motorway. So far, politicians have not responded or responded negatively to demands to provide a direct connection to Dresden (as of September 2018). The clock was also thinned in the direction of Leipzig. The last train to Leipzig now leaves at 8:50 p.m. It is therefore impossible to reach cultural events in Döbeln in the evening by public transport. The federal highways B 169 and B 175 lead through Döbeln . The city can also be reached via the Döbeln-Nord and Döbeln-Ost (both on the A 14 ) and Hainichen Döbeln ( A 4 ) motorway junctions .

The hospital is a standard care facility with 195 beds. In 1993 it was privatized and in 2010 the chief doctor took over the house.

Public facilities include a cinema, library, city museum, music school and some other cultural facilities.

From 1887 Döbeln was a garrison town for the Saxon Army , Reichswehr , Wehrmacht and National People's Army . The history of the Döbeln garrison ended in 1991 with the closure of the Paul Rockstroh barracks by the Bundeswehr .

According to the resolution of the City Council 473/24/92 from 1992, the following honorary citizenships were confirmed:

City and districts of Döbeln