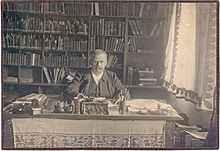 Cornelius Gurlitt as rector of the TH Dresden in 1905 in his study.

The Gurlitthaus in Nischwitz, where Cornelius Gurlitt was born

Cornelius Gurlitt was born as the third of seven children of the landscape painter Louis Gurlitt and his wife Elisabeth, b. Lewald, a sister of the writer Fanny Lewald , was born in Nischwitz near Wurzen . Other members of the Gurlitt family were artistically and scientifically active, for example the namesake Gustav Cornelius Gurlitt , a paternal uncle, a well-known composer and music theorist.

As a teenager, Cornelius Gurlitt decided to become an architect. After attending the Berlin Bauakademie , he learned from Ludwig Bohnstedt in Gotha before joining Emil von Förster's architectural office in Vienna in 1868 . This was followed by unsteady years at the Stuttgart Polytechnic , as a volunteer in the Franco-German War in 1870/1871 and in architects' studios in Kassel and Dresden , before he began to be interested in the history of architecture and art in the course of the construction of the Muldentalbahn . In the years that followed, Cornelius Gurlitt published numerous articles in newspapers and magazines, gave lectures and wrote brochures on the architecture of the city of Dresden. His tireless commitment to the city and its architectural and art history led to the offer of an assistant position at the Dresden Museum of Applied Arts in 1878 , which Gurlitt held until 1887.

Grave of Cornelius Gurlitt, his wife and daughter in the Johannisfriedhof in Dresden.

His first important work appeared in the next three years with a three-volume history of the baroque . With its extensive and positive portrayal of the era, the publication led to a reassessment of time that had previously been devalued as wasteful. In 1889, Cornelius Gurlitt worked for a short time as a private lecturer at the Technical University of Berlin-Charlottenburg , before becoming an associate professor at the chair for the history of technical arts at the Royal Saxon Technical University in Dresden, which had been founded three years earlier, in 1893 as the successor to Richard Steche . The professorship was also linked to taking over the inventory of art monuments in Saxony, which was brought into being by the Saxon Antiquities Association in 1881 . Richard Steche produced 15 volumes by his death, Gurlitt continued this as an inventory manager up to volume 41, with which the series was completed in 1923. It was important that he “went to the site himself, did his own research, took measurements, made sketches, took photos. In a word: unlike many other art historians, Cornelius Gurlitt knew the buildings he described. "

It was not until 1899 that Cornelius Gurlitt was appointed full professor. In the following year, on his initiative, the Dresden University of Technology became the first to give architects the opportunity to obtain a doctorate in engineering. bot. Gurlitt's first doctoral student was Hermann Muthesius , who has lived in England since 1896, with the 60-page dissertation The Church Building of the English Sects . Gurlitt was also the doctoral supervisor of Leo Adler , who obtained his doctorate in 1920 on "Contributions to the history of the development of architecture" at TU Dresden. From 1902 Gurlitt was one of the first to hold lectures on urban planning at a technical university . For 1904/1905 he was elected rector of the university. He held the office, which was limited to one academic year, again in 1915/1916. His rectorate includes a. the planning of the building of the mechanical department of the Technical University of Dresden, inaugurated in the summer of 1905, today u. a. Berndt-Bau and Zeuner-Bau .

At the age of 70, Cornelius Gurlitt ended his work as a professor (Prof. Dr. phil., Dr. theol. H. C., Dr.-Ing. E. h.) At the Technical University of Dresden, his last years were busy. From 1920 to 1926 he was President of the Association of German Architects (BDA), which he co-founded in 1903. In 1922 he became the founding president of the Free Academy of Urban Development . Numerous book publications followed. In the Third Reich , Cornelius Gurlitt, who initially sympathized with Adolf Hitler , was considered a half-Jew because of his mother's origin . Therefore, after his death in March 1938, there were no official awards. Cornelius Gurlitt was buried next to his daughter Cornelia in the Dresden Johannisfriedhof (3F). Part of his estate is in the university archive of the Technical University of Dresden . 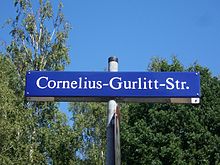 Today, Cornelius Gurlitt is considered to be the founder of art-historical research on the Baroque and thus became the founder of Saxon monument preservation . He was a member of the commission of the first German Day for the Preservation of Monuments , held in Dresden in 1900 , which Georg Dehio commissioned with the creation of a manual of German art monuments .

Some of Cornelius Gurlitt's works are still of scientific interest today: In addition to his work on the Baroque and the inventory of architectural and art monuments in Saxony, this also includes his great old work on August the Strong , which he finished in 1924.

Cornelius Gurlitt was in close contact with important personalities of his time. B. Paul Wallot , Arno Holz , Max Klinger or Alfred Lichtwark . Parts of the written estate of Cornelius Gurlitt are in the possession of the archive of the Technical University of Dresden. Today a street in the south of Dresden bears his name. A street in the Aplerbeck district of Dortmund was also named after him.

Cornelius Gurlitt was - regardless of his current position - permanently active as a journalist well into old age. With more than 100 books, he became one of the most important art historians in Saxony. A list of all publications by Cornelius Gurlitt, compiled by his son Hildebrand Gurlitt , comprises 16 manuscript pages.