Members cannot join on their own initiative, instead each regional association appoints such architects "whose professional work fulfills special, holistic requirements for the quality of planning and who also take on social responsibility with their work and for fair, transparent dealings with all those involved in Construction stand. ”It has around 5000 members.

The association was founded on June 21, 1903 in Frankfurt am Main to protect the interests of freelance architects vis-à-vis real estate speculators and building contractors and to promote the quality of the architecture. To this end, the statutes stipulated a strict separation between architectural design activities and commercial activities. The headquarters of the BDA was initially in Hanover, as the first impulses for the foundation had come from the Hanoverian architects, and the architect Albrecht Haupt , who resided there, held the office of chairman in the first few years. The entry in the register of associations was also made in Hanover on September 16, 1907.

Within a few years, the BDA became the most important representative of the interests of independent architects in many regions of Germany. Numerous reform architects came together in its framework , who, along with the Deutscher Werkbund, had a major influence on the development of modernism in Germany.

During Wilhelm Kreis' presidency from 1927 onwards, initially conflicting, more conservative and more progressive architects came together, which was reflected in pioneering congresses on the rationalization and optimization of residential buildings.

In 1948 the BDA was re-established, first in individual countries and then throughout the Federal Republic, with significant participation by architects such as Eugen Fabricius and others who had been BDA members before 1933. Bonn became the new seat. In 1952, as a result of the division of Germany, the Association of German Architects in the GDR was established with its headquarters in East Berlin.

During the presidency of Otto Bartning (1950–1959), the BDA gained great political influence in the construction years of the Federal Republic. During this time, the BDA and the GDR Association also joined the UIA (Union Internationale des architectes), which was seen as a further step in Germany's return to the international community.

In the course of the accession of the states of the former GDR to the Federal Republic, the Association of Architects of the GDR (BdA / GDR) dissolved in 1990. As a result, regional associations of the BDA were founded in the new federal states. In 1999 the association moved its federal office from Bonn to Berlin.

According to their own statements, the regional associations currently have around 5000 members (as of June 2017). The federal office is located in Berlin-Mitte in the German Architecture Center. Acting President is Susanne Wartzeck. The association is present in 16 regional associations with regional and urban sub-groups in the federal states, regions, municipalities and cities. The regional reference is intended to guarantee that the necessary critical discussion of the building process can be conducted up-to-date and by well-informed experts.

The association publishes the magazine “ der architekt ” (editor-in-chief: Andreas Denk ), which uses an interdisciplinary approach to address important issues relating to the fundamentals of architecture and building culture. The association is also the sponsor of the German Architecture Center DAZ (Artistic Director: Matthias Böttger ) in Berlin, which presents current trends in architecture and urban planning with exhibitions and accompanying events. The BDA communicates its concerns at the federal level with the annual events “ Berlin Talk ” and “BDA Day” as well as numerous other events on current topics, through statements and publications. 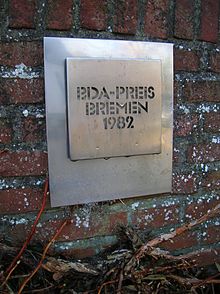 The regional association of Berlin awards its regional prizes on behalf of the BDA, also every three years. In 2018, architects applied for a prize with a total of 95 buildings. Anyone can also cast their vote on the Internet at www.bda-preis-berlin.de. Buildings in very different styles were proposed, which above all also adapt well to existing buildings or to the environment. These include, for example, the Paragon apartment building on Danziger Straße , a residential building on stilts that was created from a former water police station in Schöneweide on the Spree, the new building of the Kopernikus School in Steglitzer Lepsiusstraße or the house FRIZZ 23 in Friedrichstraße , a commercial building made from model assemblies.