Wilhelm Kreis (born March 17, 1873 in Eltville am Rhein ; † August 13, 1955 in Bad Honnef ; full name: Wilhelm Heinrich Kreis ) was an important German architect in the first half of the 20th century. He worked as director of the Düsseldorf School of Applied Arts and as a university lecturer at the art academies in Düsseldorf and Dresden .

Wilhelm Kreis was born on March 17, 1873 in Eltville in the Rheingau as the sixth of nine children. The father was a surveyor , the ancestors a vintner .

His first competition entry, which he - just 23 years old and still a student - submitted for the monumental Völkerschlachtdenkmal in Leipzig , was awarded first prize. However, Bruno Schmitz was commissioned to build the monument . Then Kreis was employed by Hugo Licht in the competition for the New Town Hall in Leipzig.

From 1898 he was Paul Wallot's assistant at the Dresden Art Academy and supported him in the construction of the Ständehaus in Dresden, whose meeting room he designed. In 1899 he won the three first prizes out of 320 submitted designs in the competition for the Bismarck Towers , which was announced by the German student body . In the following years, 47 of these monuments were built by Kreis according to the victorious design "Götterdämmerung" and eleven more Bismarck towers according to other designs. He also designed the fraternity monument in Eisenach in 1902.

In 1902, Kreis was appointed professor for spatial art at the Dresden School of Applied Arts . As a student of Paul Wallot , Kreis was initially influenced by the local baroque tradition. His first major project in Dresden was the Friedrich-August-Brücke (1907–1910). The previous building, the Augustusbrücke , was the work of the Dresden master builder Daniel Pöppelmann (1728–1730) and, despite all objections to the preservation of monuments, had to give way to a new building because it no longer met the growing traffic demands. Based on the historical model, Kreis developed a new building with a modern design, and this compromise met with broad approval. The reinforced concrete construction, clad with natural stone, enabled only nine wide-span arches instead of 18 narrow arches.

During these years Kreis, together with the Art Nouveau painter and illustrator of the Karl May volumes, Sascha Schneider and the sculptor Selmar Werner , often stayed with his friend Karl May in his Villa Shatterhand in Radebeul . Even Kuno Ferdinand Graf von Hardenberg participated in such a meeting artists. Kreis had drafted the plans for the Bismarck Tower in Jena (1906) and for the Bismarck Tower in Radebeul (1907).

In June 1908, Kreis was appointed director of the Düsseldorf School of Applied Arts as successor to Peter Behrens . During his time in Düsseldorf, the neo-baroque decorative form was withdrawn in favor of a more purposeful use form, but baroque reminiscences still had an effect, for example in the administration building for the Emschergenossenschaft in Essen and in the residential and studio building for Fritz Reusing in Düsseldorf . In 1910, Kreis won an architecture competition for the construction of the Szczecin Bismarck Tower .

Kreis returned to its neo-baroque roots for the last time in his designs for the officer's convalescent home (now the Schlosshotel) Bühlerhöhe in 1911 and for the Herne town hall in 1912. Other important buildings in the district in the last few years before the First World War are the department stores for Leonhard Tietz AG in Cologne and Wuppertal - Elberfeld , for the Geschwister Knopf company in Karlsruhe , and for Theodor Althoff AG in Dortmund and Essen . From 1915 on, Kreis volunteered during the First World War , was wounded on the Somme, awarded the Iron Cross 1st and 2nd class and in 1917 was promoted to Lieutenant of the Reserve .

The architecture department of the School of Applied Arts was transferred to the Düsseldorf Art Academy in 1920 , and its teachers became academy professors . Kreis' best-known student in the academy's architecture class was the young Arno Breker - who later became Hitler's favorite sculptor - who was considered highly gifted and not only had a lifelong friendship with the group, but also worked closely together during the so-called Third Reich, as a member of the general building inspector's staff (GBI) Albert Speer belonged. Another student was the architect Bernhard Wielers .

In 1926, Kreis moved to the Dresden Art Academy as successor to Heinrich Tessenow .

While the avant-garde developed the formal and expressive language of the New Building in the Weimar Republic , the conservative architects, including Wilhelm Kreis, continued the pre-war effort to create monumental, representative and “German” expression in architecture. Kreis, which was awarded an honorary doctorate from the Dresden University of Technology in 1929 , was probably the most renowned architect of the time alongside Paul Bonatz . The most important works of this era in the work of Kreis include the Wilhelm-Marx-Haus (1922–1924) and the so-called "permanent buildings" of the GeSoLei on the banks of the Rhine in Düsseldorf (1925–1926) and the German Hygiene Museum in Dresden (1927 -1930). In June 1926 - during the GeSoLei - Kreis in Düsseldorf was elected President of the Association of German Architects (BDA) ; he held this office until the spring of 1933, when he was replaced by Eugen Hönig, who was of the same age and who was close to National Socialism . The general appreciation of his colleagues, however, manifested itself in his appointment as honorary president, which he remained until the BDA was finally brought into line in 1935. 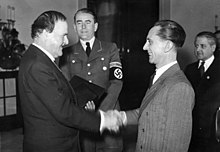 On his 70th birthday in 1943, Kreis (left) received the eagle shield from Goebbels , in the background Speer and the Vice President of the Reich Chamber of Culture Gutterer

After the National Socialists took power in 1933 , Kreis continued to be one of the most renowned architects in Germany, but lost the BDA presidency and several large commissions. Because of his previous extensive work for “Jewish” clients, he seemed to have been temporarily sidelined. As evidence of a “critical” life situation after 1933, Kreis also complained that his wife was related to the family of the politically unpopular writer Ricarda Huch . However, Kreis soon allowed itself to be captured by the National Socialists. He designed the Gauforum Dresden on the Güntzwiesen (1935), the Luftgaukommando Dresden (1937) and extensions to the Dresden Opera (1938).

He also worked under the direction of Hitler's protégé Albert Speer , who loved the circle very much, on the monumental complexes for the planned “ world capital Germania ”. Here he designed a. a. the new buildings for the Army High Command (OKH) with the soldiers' hall, the new Reich Ministry of Transport and new buildings for the Egyptian Museum, the 19th Century Museum, the Germanic Museum and the World War Museum. Because of the war, none of these designs got beyond the planning stage.

In 1938, Kreis was appointed Reich Senator for Culture for the Fine Arts. He headed the architecture department of the Academy of Fine Arts in Dresden until 1941 (1931/1932; 1940/1941 rector ) and was subsequently appointed by Hitler in 1941 as general building officer for the German war cemeteries . In this capacity he designed numerous memorials and so-called burial castles , including the memorial of the Panzer Army Africa and a monumental burial castle on the Dnepr . None of these buildings were carried out either. In 1943, Kreis became President of the Reich Chamber of Fine Arts as successor to Adolf Ziegler ; This office was previously held by Eugen Hönig, Kreis 'successor as BDA President in 1933 - a final, conspicuous indication of Kreis' "resurgence" after 1933. In August 1944, in the final phase of World War II , Adolf Hitler joined the circle Special list of the "God-gifted" with the twelve most important visual artists included, which saved him from any war effort, including on the " home front ". Shortly before, Albert Speer had appointed him to the task force for the reconstruction of bombed-out cities .

The sculptor Arno Breker immortalized the circle in two portrait busts. Breker donated the bust in Carrara marble in admiration for his teacher and later friend after 1945 for the Tonhalle built by Kreis in Düsseldorf. The bust is on public display there. An original plaster of paris of the bust is in the Arno Breker Museum Collection in the Art Museum, Collection of European Art at Nörvenich Castle .

After the war ended, Kreis moved to Bad Honnef in 1949, in the vicinity of his nephew and godchild, Helmut Arntz , who lived in Arntz Castle and who was to become his heir, as Kreis and his wife had remained childless. Despite his advanced age, he received a few other commissions, e. B. the Dortmund branch of the Landeszentralbank , residential complexes, hotels as well as the health museum in Cologne , which was not carried out , and regardless of his involvement in National Socialist cultural policy, he was a sought-after discussion partner who had the best social contacts - also to colleagues like Bruno Paul , who was critical of National Socialism Had kept their distance. In this respect he is an example of the personal continuity that was accepted at the beginning of 1945.

Kreis even received the Great Cross of Merit of the Federal Republic of Germany . For the development of architecture in Germany in the 1950s, however, it no longer came close to the importance it had had in the previous decades.

In memory of the eight crew members who died when the Army airship LZ 37 was shot down on June 7, 1915 over Sint-Amandsberg near Ghent; LZ 37 was the first German airship in World War I to be shot down by a British airplane pilot at full speed by dropping an incendiary bomb. The monument was commissioned in 1916 by the German military building authority in Ghent, and the inauguration took place on January 7, 1917.

Kreis owed particular popularity to his competition design “Götterdämmerung”, which won a prize in 1899, for a Bismarck tower of the German student body (see subsection “ First Works ” in the “Life” section). A selection of the 47 Bismarck towers based on this design, some with small deviations and always built by local architects or contractors, is listed here (detailed list: Bismarck tower ) :

Kreis was later repeatedly commissioned with the design of individually designed (i.e. only executed once) Bismarck towers. Some of these designs have emerged victorious from architectural competitions.

A street was named after him in Düsseldorf and Eltville.