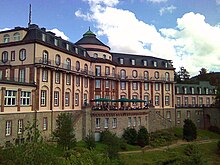 The Schlosshotel Bühlerhöhe is a currently vacant luxury hotel on the Kohlbergfelsen at 770 meters above sea level in the northern Black Forest . In 1912 it was built as an officer's convalescent home based on plans by the architect Wilhelm Kreis , but was never used as such. From 1920 to 1986 it served as a health resort, between 1988 and 2010 as a luxury hotel for visitors to nearby Baden-Baden . It has been empty since then.

The village of Bühlerhöhe , which is located in an exclave of the city of Bühl on the Schwarzwaldhochstrasse , includes a former sanatorium, today Max Grundig Clinic , and the Maria Frieden chapel next to the hotel .

The builder of the officer's convalescent home was Hertha Isenbart (1871–1918), the daughter of the Jewish merchant Julius Schottländer from Wroclaw . Her first marriage was to the much older banker Carl Pringsheim († 1895) and met the married Major General Wilhelm Isenbart at the turn of the century . He got a divorce and both married. Marriage with a divorced partner was a scandal in the upper-class milieu and in officer circles. Hertha Isenbart's family disinherited the daughter and accepted the compulsory portion of more than twelve million marks ; her husband had to quit soon.

After her husband's sudden death in 1908, Isenbart wanted to erect a memorial to him in the form of an officer's convalescent home. This was to be donated to the German Kaiser Wilhelm II . She acquired 18 hectares of forest in the area of ​​the Kohlbergfelsen from the city of Bühl.

Construction work began in 1912 and was largely completed by the beginning of the First World War . Due to financing problems, the original concept was reduced by Curt Karl Rüschhoff (1887–1969) and Hans Woltmann, two employees of Wilhelm Kreis. The completion of the house was delayed because of the war. The Bühlerhöhe never fulfilled its task as an officer's convalescent home. Hertha Isenbart committed suicide in 1918.

In 1920 the building was sold to private investors, including Otto Hüglin from St. Blasien, and from 1921 it was redesigned into a spa house by the architect Wilhelm Rutsch from Freiburg im Breisgau . A frequent guest in the house was Konrad Adenauer , to whom a plaque is placed in the hotel park in honor and after whom a suite of the hotel was named.

In 1986 the industrialist Max Grundig acquired the Kurhaus, which had run into economic difficulties, and had it expanded into a luxury hotel for 150 million Deutschmarks by 1988 according to plans by the architect Henner Hoos and the interior designer Jan Wichers.

The Bilderberg Conference took place in the hotel from June 6th to June 9th, 1991 , during which, among other things, the situation in South Africa was discussed.

After it was briefly owned by the Rafael Group, Dietmar Hopp bought the hotel in 1999 . The Spanish hotel chain NH operated the hotel from 2002 to 2010 . During the 2006 World Cup in Germany , the English national team used the castle hotel as their team quarters.

In July 2010, Hopp sold the hotel to Anna Maria Vermögensverwaltung GmbH , founded for this purchase and backed by a Ukrainian investor. The company planned to renovate the hotel after it closed at the end of August 2010 and to reopen it in 2013 with a new concept. However, the investors did not start with a redevelopment. In June 2013 it became known that unpaid bills for operating costs in the amount of tens of thousands of euros had been accrued and that electricity and telephone connections had been switched off. In the same month two companies, which are jointly owned by Dietmar Hopps, filed for insolvency against the new owners; part of the purchase price has not yet been paid. In August, hotel operations were resumed until the beginning of November. At the end of August, the investor let the payment deadline pass. This opened the insolvency proceedings.

In December 2013 the Hotel Bühlerhöhe was bought together with the nearby Hotel Plättig and other properties by the newly founded “Bühlerhöhe Castle Invest GmbH” from Baden-Baden, whose shareholder is an investment company from Kazakhstan owned by international investors . The reopening that has been announced several times has since been postponed indefinitely. So far, the investors have not submitted a concept to the city of Bühl as the responsible building authority. In the meantime, there are doubts in the media as to whether the owners are still economically in a position to raise the renovation costs. Experts put the renovation costs due to the long closure at up to 80 million euros. There are vacancy costs of up to 100,000 euros per month, more than half of which is for heating oil, so that the property is not completely neglected.

For the first time broadcast on May 25, 2015 episode room service the TV series Tatort (production of SWR ) served the hotel as a backdrop. In 2016, SWR shot the TV film Die Firma thanks at the Bühlerhöhe . The hotel also served as the backdrop for the feature film 25 km / h , shot in 2017 .

Bühlerhöhe is located 770 meters below the Black Forest High Road, which was built in 1930, on a mountain spur with a view of the Rhine Valley . Wilhelm Kreis adapted the structure to the topography and ended it with a free-standing observation tower on the top of the mountain spur. The main building is a three-storey solid construction with a mansard hipped roof. Its two wings, each 27 meters long, which are assigned to each other at an obtuse angle, are connected by a four-storey round building crowned with a conical roof. Each of these tracts has five axes on the valley side, which are framed by pilaster strips .

The valley side is the actual main viewing side of the castle. The first and second storey are combined in a colossal arrangement of ashlars framing the window axes with pilaster strips with a final cornice. Between the pilaster strips, plastered structures determine the picture, the rectangular wooden lattice windows on the ground floor have framing blind arches, the second floor has lower wooden lattice windows with frames, the third floor is designed with a relief-like, geometric plastered structure with oval windows. On the valley side , the round tower emerges like a risalit in front of the facade, in its basement there are three doors, otherwise the structure corresponds to that of the side wings.

In contrast to the neo-baroque palace architecture on the valley side, there is the inner courtyard area, which was designed according to the motifs of fortress and castle construction. The courtyard side of the main building is structured asymmetrically . The axis of symmetry of the castle facade on the valley side does not continue here, but bends to the right, i.e. in a south-easterly direction, for topographical reasons. This results in a two-part courtyard on the mountain side. This courtyard, which is framed by lower wings, consists of two almost square courtyards on different levels. In this way, a courtyard is assigned to each wing of the main building. In front of the central rotunda in the center of the two-wing main building, in the axis of the driveway, there is a mighty neoclassical main portal that is typical of fortresses.

Bühlerhöhe is a late work of historicism . In its artistic expressiveness and in its dimensions, the castle is a remarkable representative of its time, which symbolizes the social demands like hardly any other building in the state of Baden . The model is Stupinigi Castle near Turin , which Filippo Juvarra built from 1729 on behalf of King Viktor Amadeus II of Sardinia-Piedmont .