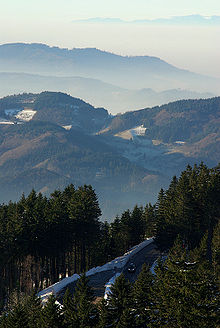 West side of the northern Black Forest on the Hornisgrinde: steep slope to the Rhine plain . In the background the Vosges 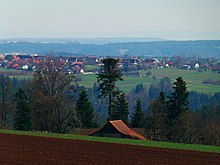 The northern Black Forest dominates the Rhine plain by more than 1000  m with rather angular, sometimes trapezoidal summit profiles , while the eastern roof runs gradually and with decreasing differences in altitude. The highest point is the Hornisgrinde at 1164.4  m above sea level. NHN . With an average share of 73% forest in the total area, the northern Black Forest is the most densely wooded part of the Black Forest. The Grinden , tree-free wet heaths , spread across the plateaus . Geologically prevails in the Black Forest of red sandstone front, with the strong zer talten West mainly the reason mountain base in gneisses and granites comes to light. The invading Granite (z. B. Forbach Granite ) and porphyries ( Karlsruher ridge ) and silicified Permian formations ( Battertfelsen ) stand out by special clip formations. The high areas of the northern Black Forest are among the regions with the highest rainfall in the German low mountain range (up to 2,200 mm / a). The most important rivers are Murg , Nagold , Enz , Alb , Acher , Rench , Oos and Wolf (only upper reaches).

The Nature regions of the northern Black Forest distinguishes the three areas Northern Talschwarzwald on the western slope, Grindenschwarzwald and Enzhöhen with the central, red sandstone, Forest, Karen and bogs dominated altitude areas and the Black Forest boundary plates on the northern and eastern edge of narrow river valleys between the high areas where clearings with Waldhufen- or clustered villages lie.

The tourist resorts with the highest number of overnight stays are Baiersbronn and Baden-Baden , popular tourist destinations and winter sports areas away from the cities are the Black Forest High Road and Kaltenbronn .

Cities and municipalities in the northern Black Forest (selection)

Bad Wildbad in the Enztal 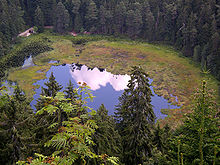 The Huzenbacher See, one of the cirque lakes in the Black Forest

Numerous cirque lakes in the northern Black Forest are traces of ice age glaciers. The best known is the Mummelsee on the Hornisgrinde. Other cirque lakes are Buhlbachsee , Ellbachsee , Herrenwieser See , Huzenbacher See , Sankenbachsee , Schurmsee and the Wildsee near Ruhestein. Many of them were also dammed up in order to provide splash water for the wood drift that was common until the 19th century . Other former cirque lakes have already silted up.

The Hohlohsee and the Wildsee near Gernsbach-Kaltenbronn are raised bog lakes on the plateaus between the Murg and Enz valleys, which are fed solely by local precipitation.

Several dams are located in the northern Black Forest. The Schwarzenbachtalsperre and the Murgtalsperre are part of the Rudolf-Fettweis-Werk , a pumped storage and run-of-river power plant in Forbach. The Nagoldtalsperre regulates the water level of the Nagold. The Kleine Kinzig dam is used to supply drinking water, regulate water and generate electricity.