Forbach is a municipality in the northern part of the Black Forest in the Baden-Württemberg district of Rastatt . 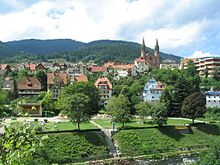 Forbach: Murggarten, right behind the parish church of St. Johannes

View into the Murg valley from the direction of Rote Lache . In front is Bermersbach , in the valley on the left Gausbach and on the right Forbach

The next larger cities are Gernsbach and Gaggenau , about 10 km and 14 km further north in the Murg Valley, and Baden-Baden in the northwest , about 12 km away. In the west, beyond the Black Forest main ridge and already in the Upper Rhine Plain, Bühl is about 17 km away, upstream in the south, Baiersbronn is about 20 km and the city of Freudenstadt is about 26 km away.

The northern part of the Black Forest National Park established in 2014 mainly belongs to the Forbach municipality.

The highest elevation Forbach is at 1054.1  m above sea level. NHN the Hohe Ochsenkopf , also the highest mountain in the Rastatt district. The Badener Höhe and the Mehliskopf are partly on the Forbach municipal area.

The municipality of Forbach included the former municipalities of Bermersbach , Gausbach and Langenbrand with a total of 28 villages, hamlets, Zinken, farms and houses. The village of Bermersbach, the Gasthaus Rote Lache and the houses Wolfsheck belonged to the former community of Bermersbach . The Forbach community within the limits of June 30, 1974 included the village of Forbach, the hamlets of Erbersbronn, Hundsbach -Aschenplatz, Hundsbach-Viehläger, Kirschbaumwasen , the settlements of Herrenwies , Hundsbach-Biberach, Hundsbach-Mitte and Raumünzach , the Schindelbronn, Seebachhof and courtyards Trabronn and the Badener Höhe, Kaltenbach, St. Anton, Sasbach, Schneiderskopf and Tauchert houses. The village Gausbach and the houses Röhret belonged to the former community of Gausbach. The village of Langenbrand, the Breitwies ( Weisenbachfabrik ) and Wolfsheck settlements and the Langenbrand-Bermersbach railway station belonged to the former municipality of Langenbrand . In the municipality of Forbach in the area June 30, 1974, was deserted Glad wells. The Tauchert residential area was reclassified to Baiersbronn on January 1, 1977.

Until the 17th century

Forbach was first mentioned in 1360 in a will from Ebersteiner Heinrich II.

In 1455, Margrave Karl sold his forests in the Birkenau to the Hartmannsbrunnen and the red water with fishing rights for 250 guilders to several citizens in Forbach, Gausbach and Bermersbach . Margrave Philipp confirmed the forest sale of 1455 in 1532 and demanded interest of 65 guilders for 50 years from the parishes of Forbach, Bermersbach and Gausbach.

In 1543 Forbach received a village order , which specified in a few dozen articles what was lawful and permitted and what was not permitted and what had to be done to protect against enemies and other dangers. In 1569, Count Philipp von Eberstein sold his forest property, including sawmills and rafting rights, to the Murgschifferschaft for 3500 guilders . In 1624 the Ebersteinerin Maria married the Count of Wolkenstein, who with Maria also got half of Forbach.

The Protestant Church in Forbach

From 1555 the religious conflict did not stop in Forbach; In the hundred years up to 1655, the Forbachers changed their denomination eight times . Finally, the Roman Catholic Church prevailed, to which most of the Forbachers still belong today. A Protestant church building was only built shortly before the First World War .

After the local elections on May 26, 2019, the municipal council has 14 members - in addition to the mayor as chairman. The choice brought the following result:

Forbach has had partnership relationships with the French community of Andilly since 1963 and also with the Italian community of Montemaggiore al Metauro since 2007 . On April 24th, 2008 the partnership certificate was signed in Italy.

A right-swept blue hatchet in silver with a black handle, accompanied at the top and bottom by two red roses with blue velvet. As a symbol of the community's abundance of wood, this coat of arms appeared for the first time in a seal engraved in 1722. In the escutcheon for sealing the homage protocol from 1811, the roses were missing as a reference to the rose symbol of the Eberstein house. Around 1850 the roses returned to the coat of arms. In 1901 the municipal council adopted the colors of the coat of arms.

On the Draberg near Forbach is the transmitter Murgtal of the Südwestrundfunk.

The federal road 462 ( Rastatt  - Rottweil ) connects the community with the national road network. The connection road to Baden-Baden leads over the Rote Lache .

The Rudolf-Fettweis-Werk , a hydropower plant owned by EnBW , is the last major employer in Forbach , along with the municipal administration and the Mittelbaden Forbach Clinic (formerly the district hospital). Originally part of E. Holtzmann & Cie. Wolfsheck paper mill, which belongs to the company, was closed in 2007.

Forbach has a primary school in the center of town. There are also two parish and one Roman Catholic kindergarten in town.

The wooden bridge over the Murg is the symbol of Forbach

The covered wooden bridge over the Murg was built in 1778–1779. It crosses the river with a span of 37.8 m without intermediate piers and is therefore flood-proof in contrast to its predecessor buildings. The first construction lasted until 1954, in the following year the bridge was rebuilt true to the original and renovated in 1976. It is passable by car.

The aqueduct over the Murg ( ▼ ) is the oldest preserved rammed concrete bridge in Germany . It led branched water above a Murgschleife to the power station of the former paper mill. The canal bridge was built in 1885 and has been a listed building since 1979. 48.707424 8.361135

The Catholic parish church of St. John the Baptist towers over the Forbach town center with its two 50 m high towers on its double tower facade . The basilica was built between 1886 and 1891 in the neo-Romanesque style according to plans by the architect Adolf Williard .

The Westweg long-distance hiking trail runs through Forbach and leads past many sights.

The Murg Valley Museum , which deals with the living conditions of earlier generations in the region, is located in the festival hall (former school) in the Bermersbach district . The museum is run by the Heimatverein Bermersbach.

Cities and municipalities in the Rastatt district