Church in Valwig on the Moselle, built by JC von Lassaulx in 1824–1827 , is one of the first neo-Romanesque buildings ever

The romanesque , also Romanesque Revival called, is a European art style of the 19th century. Artists, especially architects , used models from the past two millennia - in this case the Romanesque . But there were also neo-Gothic , neo-Renaissance , neo-Baroque and the association of several of these styles in a work (so-called. Eclecticism ), which together in the style of history as historicism are called. 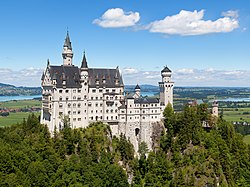 Altar in the parish church of St. Martin in Hundersingen

In the 1820s, Heinrich Hübsch and Rudolf Wiegmann pioneered the neo-Romanesque in Germany and Europe-wide with fundamental publications , who judged the Romanesque to be more appropriate to their own country. Johann Claudius von Lassaulx and Friedrich von Gärtner were among the first architects of the Neo-Romanesque , whose arched style showed other influences in addition to the Romanesque . Since the art-historical term “Romanesque” did not yet exist at that time, the terms “Byzantine style”, “round arch style” or “early Christian style” were used equally.

The Eisenacher Regulativ published in 1861 allowed the medieval styles of Romanesque and Gothic as a style for Protestant church building in addition to the early Christian basilica. The climax of the neo-Romanesque can be set in 1891 with the Wiesbaden program on Protestant church building. The style extends beyond the end of actual historicism around the turn of the century to the 1920s. The building activity of the neo-Romanesque had its focus on the church. Due to industrialization , there was a rich field of activity in the rapidly growing cities. In the Catholic south of the German-speaking area, however, the style is rarer.

The neo-Romanesque can also be found in secular architecture. Examples of renovations in palaces and fortresses that were equivalent to new buildings are the reconstruction of the Romanesque Wartburg near Eisenach and the imperial palace in Goslar . Neuschwanstein Castle can be considered the most famous neo-Romanesque building , but it has an eclectic interior. When the French origins of the Gothic, which had long been regarded as “old German”, could no longer be disputed, in Wilhelmine Germany the neo-Romanesque was increasingly used as a “real” German style for public secular buildings such as post offices, government buildings or traffic structures. Well-known representatives are z. B. the Prussian government building in Koblenz as well as the train stations Metz-Ville and Worms Hauptbahnhof .

Stylistically, the formal elements of the Romanesque in Western Europe were not only used, but the more splendid forms of the Byzantine style were also used . The construction of the churches did not stick to Romanesque floor plans either, but used the more progressive principles of Gothic, recognizable by the ribbed vaults and the rectangular base of the yokes .

Also in the altar one speaks of neo-Romanesque. However, since no altar structures were used in the Romanesque period, “neo-Romanesque” high altars are often basically neo-Gothic altars that use round arches instead of pointed arches and dispense with pinnacles . The lack of historical models led to the fact that in the historical altar building under the label of "neo-Romanesque" forms and structures were used creatively and corresponding altars often appear more playful than those of the neo-Gothic style.

Important buildings in the neo-Romanesque style 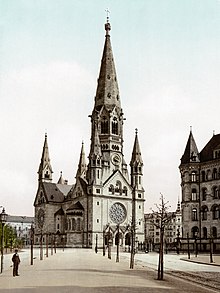 Building of the Prussian district government in Koblenz 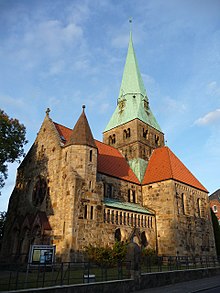 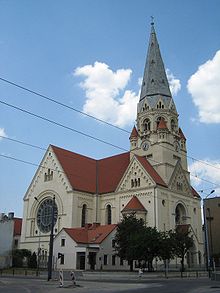