This article deals with the 12th district of Vienna, for further meanings see Meidling (disambiguation) .

Meidling is the 12th district of Vienna and is located southwest of the city center.

The district is limited as follows:

The 12th district is located in the south-west of Vienna, about 5 to 10 km from the inner city . Topographically, it extends from the Wiental south of the Wien River into the plain between the Wienerberg in the 10th district and the Green Mountain , the castle hill of Schönbrunn , in the 13th district .

The district, after which the " Meidlinger L " of the southern Viennese dialect is named, essentially consists of:

In between are the foothills of the Wienerberg with its geologically young beach terraces and brick pits.

There is also a breakdown of the district area into the counting districts of the official statistics, in which the counting areas of the municipality are summarized. The eleven counting districts in Meidling are Gaudenzdorf, Fuchsenfeld, Meidlinger Friedhof , Wilhelmsdorf , Meidlinger Hauptstrasse , Tivoligasse, Gatterhölzl, Oswaldgasse, Am Schöpfwerk , Altmannsdorf and Hetzendorf. In spite of the fact that some names are identical, the boundaries of the census districts do not match those of the cadastral communities.

Under the name Murlingen the place is Meidling since the year 1104 demonstrated. Most of the land originally belonged to Klosterneuburg Abbey . In the Middle Ages , fields and viticulture were mainly used in Meidling . In 1755 a sulfur-containing spring was discovered, after which the area around the Theresienbad became a popular destination for the Viennese. At the end of the 18th century more and more industry settled, which completely changed the character of the place. In 1806 this led to the division of the community, which had already grown quite large, into Obermeidling and Untermeidling. In Untermeidling, a separate settlement developed on the old brickworks site, which was separated in 1846 under the name Wilhelmsdorf . In 1819 the suburb of Gaudenzdorf was built along the line wall, where the Gürtel was built around 1900 as a main street connecting several districts , where numerous dyers, tanners and washers settled because of its location on the Vienna River .

The place Altmannsdorf was mentioned for the first time in 1314 and had a rural character for a long time. 1190 did the first mention of Hetzendorf , after Henricus of Hetzendorf it had received a princely fiefs. Later it came into the possession of the Klosterneuburg monastery and the Teutonic Knight Order . In the 18th century the place developed into a villa settlement.

On January 1, 1892, all of these communities were united to form the 12th Viennese district of Meidling , which was a typical working-class district. The Vienna River was regulated from 1895–1900 (see also: Right Wienzeile ), the line wall near the Gürtel from 1894 onwards. In 1907 “Neu- Margareten ”, part of the 5th district west of the belt, was transferred to the 12th district.

In 1898 the district was connected to the network of the Vienna steam light rail with the Meidling Hauptstraße station , which in turn was replaced by the Vienna Electric Light Rail in 1925 .

From 1909 to 1920 Hermine Santrouschitz lived as a child in poor circumstances in Meidling. She later became known as Miep Gies and was the most important helper in Holland for Anne Frank , who was threatened by National Socialism and whose diary she saved.

Since 1980, the U4 underground line has been running to Meidling instead of the Stadtbahn . The new subway stations Längenfeldgasse (lines U4 and U6 ), Niederhofstraße and Bahnhof Meidling (until 2013 Philadelphiabrücke), both U6, have been in operation since 1989 , in 1995 the stations Tscherttegasse and Am Schöpfwerk were added as tram line 64 Siebenhirten (23rd district) was converted to U6 operation.

In road traffic, the so-called Altmannsdorfer Branch of the Südosttangente (A23) was built until 1978, which enables access from Altmannsdorfer Straße to the A2 Südautobahn and the tangent to the northeast. The Meidlinger main road was opened in 1994 as a pedestrian zone.

The ÖBB tracks to the west and south of the Wien Meidling train station were expanded and converted for express traffic, since the Lainzer Tunnel tracks have been running into this train station and the connected Donauländebahn since 2012 .

In the area of ​​the belt, many communal housing complexes known as “ community buildings ” were built in the 1920s . The areas of Hetzendorf and Altmannsdorf remained rural, but terraced housing estates emerged during the Red Vienna era and extensive residential complexes emerged after the Second World War .

In the 1990s there were several small changes to the district boundaries. The border to the municipality of Favoriten was moved in 1995 in the area of Wienerbergstraße and in 1999 at the freight station Matzleinsdorf. The border course to the municipality of Liesing was changed as follows: 1995 in the area Am Schöpfwerk and in the Wilhelm-Erben-Gasse and 1997 on the Rosenhügel in the Emil-Behring-Weg and Wundtgasse area. In addition to traffic areas, these border changes mainly affected individual houses, allotment garden settlements and a large apprentice home on Kundratstrasse , which fell to Favoriten. 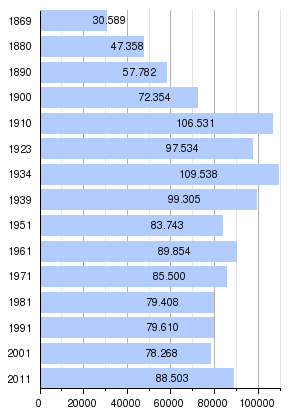 Today's district area of ​​Meidling only comprised around 30,000 inhabitants in 1869. Due to the permanent influx of people to Vienna and the neighboring communities, the population had already doubled by the time it was incorporated in 1892. The population growth continued until the beginning of the First World War, so that the district comprised 106,531 inhabitants in 1910. After a slight decline after the First World War, the district reached its highest population in 1934 with 109,538 inhabitants. As a result, the population decreased significantly and, after a brief recovery in the 1960s, stabilized from the 1980s at a value of just under 80,000 inhabitants. Only after the turn of the millennium did the district population begin to grow again in line with the Vienna-wide trend. At the beginning of 2015 the population was 92,092 people.

As a working-class district, Meidling has traditionally been politically influenced by the SPÖ , which has been the district chairman since 1946. The SPÖ often achieved an absolute majority in Meidling. The ÖVP was consistently the second strongest party in Meidling from 1946. It was not until 1991 that the ÖVP was overtaken by the rising FPÖ , which also broke the absolute majority of the SPÖ in 1996 after gaining 8.5%. However, the FPÖ already lost all of its profits in the 2001 elections and even fell behind the 1991 result. This decline continued in 2005, albeit to a lesser extent. The FPÖ was only able to stay ahead of the ÖVP, which, like the FPÖ, achieved 15.5%. The SPÖ won an absolute majority in 2005, but lost it again in 2010. The FPÖ increased significantly again in 2010 and even achieved its best result to date with 29.8% of the votes.

The largest park in the district is the (partly publicly accessible) park of Schloss Hetzendorf, followed by Haydn Park with around 26,500 m² on the site of the former Hundsturm cemetery, which was closed in 1874 and opened as a park in 1926. Only the tombstone of the composer Joseph Haydn remains from the original cemetery .

The Wilhelmsdorfer Park , which is also called Deckerpark because of its location on Deckergasse, is around half the size . There was a small public green area here as early as 1909, which was expanded in 1980 after a rail warehouse of Wiener Linien was closed and redesigned in 1990. In the immediate vicinity is the Steinbauerpark, which is about the same size, which lies between Längenfeldgasse and Malfattigasse and was reopened in 2003 after the construction of a public garage.

The “ Stadtwildnis Gaudenzdorfer Gürtel ”, a ruderal area between the Wiener Gürtel and Linke Wienzeile, covers a similarly large area . On the district border with Hietzing am Grünen Berg is the Marillenalm, a near-natural, largely wooded park that also includes fruit trees.

Meidling's first successful athletes were the weightlifters of the “Ersten Meidlinger Athletenklub” founded in 1884, and for a long time Austria's most successful weightlifting club. Wilhelm Türk achieved ten world records and became world champion in 1898. In 1906, Meidling's first soccer club was founded with the Wacker sports club. The club won the championship and cup finals in 1947, but was merged with the Admira club to form FC Wacker / Admira in 1973 .

The GRG 12 Erlgasse with its characteristic tower

The Hetzendorf fashion school is located in Hetzendorf Castle . There are two general higher schools: the grammar school called GRG 12 Rosasgasse , which has existed since 1883 and where the later Federal Chancellor Ignaz Seipel graduated in 1895, the Burgtheater director Friedrich Schreyvogl in 1918, the writer Gerhard Fritsch in 1942 and the educational scientist Richard Olechowski in 1955 was also visited by Ernst Wimmer , and which has one of the largest Tesla systems in Europe , and the GRG 12 Erlgasse , which has existed since the 1950s in a school building built in the interwar period for the Czech school association Komenský (originally there was a Czech people's and a secondary school). Another high school was located at Singrienergasse 19-21 in Meidling; it was relocated to Inzersdorf , Draschestrasse ( GRG 23 VBS ).

The technical school for economic professions is located at Dörfelstraße 1, which was founded in 1904 as a housekeeping school for girls and now focuses on training in health and social issues as well as IT support (PC technology and web design).

The International Business College Hetzendorf is located at Hetzendorfer Straße 66-68 . It offers various forms of business academy and business school and cooperates with various universities . Before that, there was a secondary school at this location .

The Meidlinger Markt is located on Niederhofstrasse, in addition to market stalls and restaurants, there is also a farmers' market with rural goods. At the southern end of Meidlinger Hauptstraße is the Arcade Meidling shopping center , the upper floor of which is used by a branch of the Vienna library and a music school.

Wolfganggasse station of the WLB

The 12th district is currently served by two underground lines ( U4 and U6 ), the main S-Bahn line, tram line  62 and the Badner Bahn . The tram lines 6 and 18 already run on the Margareten side of the belt , but are still important for the development of Meidling. The Südbahn runs through the district , whose station Wien Meidling is the busiest station in Austria due to the dense S-Bahn and regional traffic. From mid-December 2009 to December 2014, it took over the main functions of the demolished southern station and has been controlled together with the new central station since its completion . In addition, the Pottendorfer line branches off from the southern line here . The Donauländebahn crosses the 12th district, but the former Ober Hetzendorf and Altmannsdorf stops are no longer in operation. The Südbahn also has a station on the outskirts of Hetzendorf.

In the 12th district, the Wolfganggasse depot of Wiener Lokalbahnen was also located until the 2010s , where the Badner Bahn trains were parked and serviced. Opposite, in Eichenstrasse, was the headquarters of the Vienna Local Railways, which was then moved to the 23rd district. As far as the Philadelphiabrücke to the west of it, the Badner Bahn uses the tracks of the Wiener Linien, from there it runs its own track to Baden near Vienna with the Schöpfwerk and Gutheil-Schoder-Gasse stops in the district area.

In its densely built-up part, the district used to be much more accessible by tram lines; There was a large depot in Aßmayergasse. Some lines have been converted to bus operation, and some have been discontinued after the U6 has been built. The Hetzendorf depot of Wiener Linien , which still exists today, is located at the western end of Hetzendorfer Strasse, but already on the other side of the district border in the 13th district.

In addition to numerous doctors from a wide variety of specialties resident in the district, there are also the Meidling Accident Hospital and the Meidling Rehabilitation Center . The latter is the only Austrian rehabilitation center for people with traumatic brain injury (TBI). Both institutions are operated by the General Accident Insurance Fund .

These are other important addresses in health issues

The Anton-Benya-Haus , which opened in March 2002 on the area of ​​the former Pfannschen Bad in Arndtstrasse 65-67, mainly houses facilities for the elderly: