The Bebelhof is a social housing of the municipality of Vienna in Wien- Meidling , which was built from 1925 to 1926 according to plans by Karl Ehn .

The Bebelhof is located in the 12th district of Meidling in Vienna at Steinbauergasse 36; the block is also bordered by Längenfeldgasse , Klährgasse and Aßmayergasse. The complex consists of 301 apartments on 21 stairs. It is one of the most remarkable municipal buildings in Red Vienna from the interwar period. In Steinbauergasse, the two corner pylons are particularly noticeable, as are the flagpoles above the entrance gate. The system is partly built on five floors, partly on six floors. The entire length of the front in Steinbauergasse is taken up by business premises, the floors above step back behind the building line. The facades are structured by pointed and round bay windows and elongated balconies. In the courtyard are two of Mario Petrucci designed sculptures, the slide with the inscription: " Do not forget that you too were once a child " and the drinking fountain , the puffer fish comes -plastic by Josef Riedl. Two reliefs with grimaces have been placed under the sidewalk building on Längenfeldgasse. 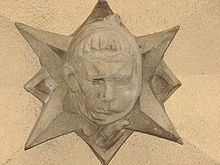 The residential building was named after August Bebel (1840–1913), the leader of the German social democracy . During the civil war , the Bebelhof was occupied by Schutzbund on February 12, 1934 . The following night a barricade was also erected in front of the entrance. The executive did not manage to take the Bebelhof until February 15.