In Greek mythology, nymphs are female deities of lower rank who appear everywhere as personifications of natural forces and were partly thought of as companions of higher deities such as Dionysus , Artemis or Aphrodite , and partly as independently acting.

They were regarded as the - predominantly - benevolent spirits of the places, mountains, trees, meadows or grottos, but are not always tied to them, rather roam freely, perform dances, hunt the game, weave in cool grottos, plant trees and are helpful to people in different ways. However, they avoid noisy human activities. Like humans, nymphs were considered to be mortal. However, they should live much longer - up to near immortality and eternal youth. The death of a nymph was usually equated with the end of what she embodied - for example a spring or a tree.

Spring nymph in the bath of the Limes fort Schirenhof (Ostalbkreis) 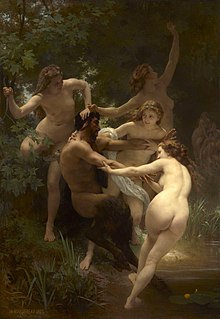 There were numerous types of nymphs:

As local goddesses of certain areas, they were also named after them; for example, the Peliads are the nymphs of the Pelion mountain range . The nymph Noris is an allegory on the Middle Franconian city of Nuremberg .

One of the most famous oreads was Echo , the nymph of Mount Helikon . The goddess Hera deprived her of language and only left her the ability to repeat the last words addressed to her. A tree nymph represents Eurydice , Orpheus ' wife .

The symbolism of the nymphs is diverse. In particular, it covers the areas of fertility and sexuality .

Because of the fertilizing power of the water, the nymphs were regarded as teachers of Zeus and Bakchos and, since some sources were attributed inspiring power, also as teachers of Apollo and bestowers of poetry and divination.

The concept of the nymph, however, is older than the classical, ancient world of ideas and has its roots in shamanism , which always sees places, plants and animals as animated.

Later parallels can be found in the concept of elementals .

In the fine arts, nymphs are usually depicted as lovely girls, usually lightly dressed and wearing flowers and wreaths. The water nymphs in particular were represented with water jugs and urns on their heads. Well-known works of art from ancient times are statues of the Praxiteles , a group of Arkesilaos and reliefs by various masters. 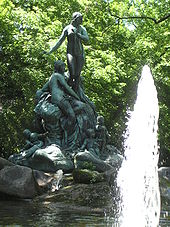 Fountain in the Nymphengarten in Karlsruhe

Nymphs also served as a motif for statues , especially fountain figures , and as coin mint figures in antiquity . Nymphs is a Finnish fantasy television series about three nymphs living in modern times.

The French composer Jean-Philippe Rameau composed the opera Platée in 1745 as a lyrical comedy. The naivete of the aging and ugly water nymph Platée is used by Jupiter to expose the jealousy of his wife Juno.

The French composer Claude Debussy composed the piece Syrinx for flute in 1913 . The short piece refers to the legend of Pan and Syrinx ; the nymph evades the stalking of the god by transforming herself into a reed. Pan then invents the flute.

The band In Extremo reflects the image of the nymphs in their song Nymphenzeit .

Rusalka is Antonín Dvořák's most successful opera. The libretto is based on Slavic folk myths about the Rusálki (water spirits, mermaids) and is similar to the German story Undine by Friedrich de la Motte Fouqué, Hans Christian Andersen's fairy tale The Little Mermaid and the old French Melusin saga. The opera with the subtitle Lyric Fairy Tale is also known as the “Czech Undine”.

The Italian composer Claudio Monteverdi composed in his Sestina ( Lagrime d'amante al sepolcro dell'amata ) in 1614 the lamentation of the shepherd Glauco , who mourns the death of his beloved nymph Corinna .

In post-ancient poetry, the motif of the nymph appears again and again, for example in the Renaissance and Romantic periods .

Catharina Elisabeth Goethe describes herself as a water nymph at a crucial passage. In a famous letter of August 28, 1808, she wrote to her young friend Bettina Brentano : “But I have to drink for you, because my Lieschen has always brought me the best wine and a boutelle of water, because you know that I am a water nymph; and two peaches are next to it, one for you, the other for me, I will both eat them in your name, and now I toast with you, He should live . "

The whole thing was already mentioned in Tacitus "let me see one then I'll believe it" he is said to have exclaimed. A moment later he collapsed dead. That is why some nymphs are said to bring disaster.

The expression “nymphchen” comes from Vladimir Nabokov's novel Lolita for a type of precocious girl whom the protagonist finds sexually attractive.

The Austrian writer Michael Köhlmeier published his novel Kalypso ( ISBN 978-3492039659 ) in 1997 , in which he transformed the story of Odysseus and the nymph Kalypso into modern times. One year later the work was published as an unabridged author's reading comprising eleven CDs ( ISBN 978-3886984541 ). 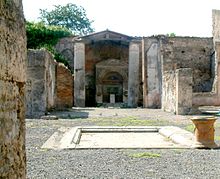 Nymphaeum in Pompeii (buried when Vesuvius erupted in AD 79)

A nymphaeum is a temple originally dedicated to the nymphs, which was usually located at a spring.

The word "nymph" was used in the Middle Ages, especially in northern Europe, for both a witch and a fairy , because both, like the nymphs, descended from pre-Christian priestesses.

The old connection between nymphs and sexuality persists more or less in European sagas and fairy tales .

The term nymphomania is related to frequent partner changes ( promiscuity ), for an increased desire of women for sexual intercourse . In the past, depending on conservative- moral values , this was also described as overestimated sexual motivation or "passion" as "man stupidity" and the woman herself sometimes as a slut . A distinction must be made between “nymphomaniac phases” or a mentally ill addiction (as a substitute satisfaction for real love with simultaneous fear of attachment ). A woman is sometimes referred to as a nymphomaniac who lives in a steady relationship but repeatedly cheats because her own husband does not want or can not share the same wishes related to frequent sex . In the case of pathological nymphomania, there is a risk that, despite numerous orgasms, sex will become boring over time and women will suffer as a result. In science, the term is now out of date, but in today's colloquial language it is valid, as it is proven by history and is also rated positively in public opinion among liberal people with a perhaps unconscious reference to antiquity. 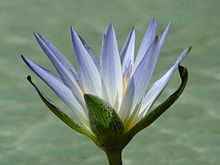 The word “nymph” is also used in some cultures for symbols of the female genitalia such as lotus flowers , white water lilies and certain snails (see also cowrie snail ).

Some hummingbird species are used for their glorious spring clothing called nymphs.

The Latin word arbor ('tree') is not masculine according to the form and declination, but, like the tree names with masculine endings, a feminine, since the Romans believed that a nymph lived in every tree.