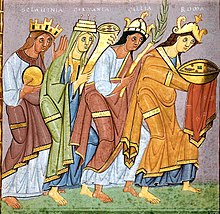 The impersonations (v. L. N. R.) Sclavinia (for the people of the Slaves ), Germania (for the residents of Germany), Gallia (for residents Gaul) and Roma (for the inhabitants of Italy) homage Kaiser Otto III. through gifts (illumination from the Gospel Book of Otto III. , 990 AD).

The personification , personification or fictio personae is, depending on the context, either a rhetorical figure that gives animals, plants, objects, dead people or abstract entities a voice ( prosopopoeia ; from Greek προσωποποιία prosōpopoiía ) or gives human traits (personification), an artistic one Representation of something abstract in the form of a person, or the idea of ​​natural forces as personal beings in the religious field. In a more general sense, one also speaks of anthropomorphism . Depending on the view of the structural or defining relationships to one another, either personification or anthropomorphism is seen as a special case of metaphor . An expanded personification, like an expanded metaphor, can also be viewed as an allegory .

Anthropomorphic representation of the state : the famous title page of Thomas Hobbes ' Leviathan from 1651

Personification is to be distinguished from personalization as a principle of historical didactics .

Personifications are one of the most common stylistic devices in poetry and epic .

Expressions like " Father State ", " Mother Nature " or " Father Frost " belong to the sunken personifications. So personifications are abstract figures: animals or plants that take on a person's gifts.

For example, “the garden mourns”, “the sun laughs” and so on.

The personification is considered to be one of the most easily recognizable style figures.

Personification is particularly facilitated in a language if the words for persons and for the personified objects, animals, symbols and so on have the same syntactic or grammatical structure. For example, the term der Regen can be easily personified in German: “Der Regen grabbed me.” Has the same structure as: “Der Anton grabbed me.” If it were only raining as a verb, it would not be so easy to personify .

Allegory of good government , with the personifications of peace, generosity, strength, wisdom, justice, and moderation

In the visual arts , personifications in painting and sculpture occur in all epochs. They denote figures that allegorically embody abstract content or facts : spring , Christianity and Judaism , the river Tiber , the city ​​of Rome , the grim reaper , good government, virtues or vice , etc.

Whether a personification is represented as female ( feminine ) or male (masculinum) depends on the gender of the word on which the personification is based. The Haus zum Roten Ochsen in Erfurt , for example, shows the sun as a bearded man, although in German it is female, since the artist used the Latin word sol as the basis, and in Latin sol is masculinum. Accordingly, the moon is represented as a woman from the Latin luna (feminine) .

Personifications are often provided with specific attributes in order to be easier for the viewer to identify.

Duke Heinrich Julius zu Braunschweig and Lüneburg , Prince of Braunschweig-Wolfenbüttel in a series of thalers, shows a particular preference for emblematic representations . For example, in the coin image of the truth thaler, the personified naked truth can be seen, which stands with its feet on the personified slander and lie. The inscription in the field confirms this: VERITAS / VIN - CIT / OM - NIA / CALVMNIA / MENDACIUM (Latin = The truth conquers all slander and lies). The thalers with symbolic representations served the duke as a means of propaganda in the disputes with some noble families in his country, as did his mosquito thalers .

The tower taler shows a tower protruding from surging waves, which is exposed to violent storms, which are personified by heads. Hail falls from storm clouds over the tower.

In religion and myth , the personification of forces of nature (→ animism ) is widespread and therefore plays a significant role in the history of world religions .

Personification could point to the basic structures of our thinking . Sensory impressions are interpreted in the brain by assigning them to known experiences. In early childhood, we experience ourselves and others, i.e. people, as causes of change. Conversely, children often intuitively interpret changes as an effect of people. So they sometimes suspect ghostly beings as the cause of z. B. creaking roof beams. Personifying patterns of interpretation are available to us earlier than abstract thinking . For younger children, the idea of ​​a personified sun moving across the sky is easier to grasp intuitively than a heliocentric view of the world with its more abstract terms, such as B. Gravity.

This may give rise to numerous ideas of personified natural forces. For example, in Greek myth , Poseidon is the god of the sea; A multitude of evidence from the Bible can be understood as a reminder of the personification of natural forces from the time before the consolidation of monotheism , for example the following passage from the book of Job : "And the Lord answered Job from the storm and spoke." (Job 38.1). Other such natural personifications can be found in many cultures: