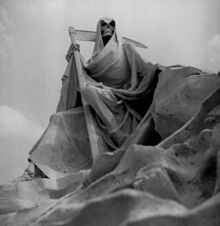 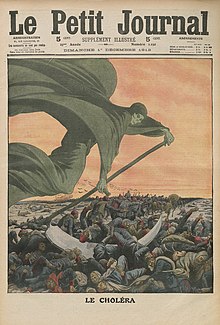 The depiction of death in a 1912 French newspaper in a cholera epidemic.

The Grim Reaper (even the Grim Reaper or Reaper ) is from the Middle Ages derived personified , anthropomorphic allegory of death . Death is often depicted as a rib- like figure (skeleton) that mows people down with a scythe .

In the Greco-Roman mythology brought under the Fates particularly Atropos (or Morta ), the oldest of the three Fates, the human death, giving them the thread of life (though usually with a average scissors , not with a sickle). The sickle , on the other hand, was an attribute of the originally agrarian god Kronos - Saturnus . After being mixed up with Chronos , he also became the god of time and thus of transience. The explicit connection between death and reaper (a scythe-bearing farm worker) was made in the Bible , for example in the judgment of the prophet Jeremiah about Judah ( Jer 9.20 f.  EU ):

“Death has risen through our windows / invaded our palaces. He takes the child away from the street, the young men from the squares. The corpses of the people / lie like manure in the field, like sheaves behind the reaper; there is no one to collect them. "

Also in the parable of the tares in the Gospel of Matthew ( Mt 13.39  EU ) the world is compared with a field, the upright with wheat, the wicked with weeds and the angels who “reap” them in the Last Judgment and separate them from each other with reapers. However, the only clear personification of death in the Bible is not a reaper, but the fourth horseman of the apocalypse on a pale horse, behind which all the inhabitants of the underworld are trailing ( Rev 6 : 8  EU ).

As early as 1220, Caesarius von Heisterbach mentions painted images of death in the LXI chapter of his Dialogus miraculorum in the form of a person with a scythe. Apparently none of these images has survived. In the context of late medieval representations of the dance of death , the grim reaper prevailed in the visual arts and performing arts in the middle of the 15th century as a naked human skeleton or only negligently clad with a shroud . This is also what the literary term bone man, which is more abstract than the concept of the grim reaper, refers to. On Italian tarot cards , Death was depicted as a scythe-wielding skeleton. In addition to the attribute of the scythe, the hourglass (only invented in the 14th century) appeared as a vanita symbol . In the course of the 17th century, the shroud changed more and more into a voluminous, almost everything-covering cloak, even later into a long robe with a hood , which is either supposed to hide a skeletonized body or is empty. Note, however, is that death as in the Romanesque and Slavic is female languages and the Grim Reaper therefore often called Sense woman is perceived (z. B. Franz. La faucheuse , sealed. Smrtka ).

Already in Ackermann from Böhmen (around 1400), a dispute between a farmer and death, who kidnapped his wife, death is described as a reaper who mows down all herbs and flowers without distinction, without regard to “splendor, strength and virtue ". The minstrel Oswald von Wolkenstein also mentions “the sickle of death” in his song manuscript from 1432. The Grim Reaper finds further literary portrayals in the folk song Es ist ein Schnitter , is called Death , the oldest surviving versions of which date from the Thirty Years' War . Based on the Grim Reaper, The Black Death appears as an opponent in the John Sinclair series.

The Grim Reaper appears as a character in movies in Bergman's classic The Seventh Seal (1957), which is set in the Middle Ages at the time of the great plague and ends with a dance of death. The scene in the film, in which the main character plays chess with death, was later parodied more often: The Dove (1968), Bill & Ted's Crazy Journey to the Future (1991) and Last Action Hero (1993). The Grim Reaper has parodic appearances in The Last Night of Boris Gruschenko by Woody Allen , in The Meaning of Life by Monty Python or in The Story of Brandner Kaspar based on the short story Der Brandner Kaspar . Even in the children's animated series The Scary Adventures of Billy and Mandy , the Grim Reaper starred.

In the films in the Final Destination series , death chases people who have withdrawn from their fate without being embodied in a figure. In the dramas The Black Majesty (1934) and his remake Rendezvous with Joe Black (1998), Fredric March and Brad Pitt, respectively , embody death.

In Terry Pratchett's Discworld novels , death as the Grim Reaper has a brief appearance in many books. In the books he lives in a villa with a garden near the realm of the dead, in which black and purple tones dominate without exception. He lives there with his servant named Albert and his foster daughter Ysabell and his horse Binky. In the course of the books, Tod's apprentice Mort and his daughter Susanne, whose grandfather is Death, join them.

The Grim Reaper appears as a protagonist in caricatures, for example in Ralph Ruthe and Joscha Sauer (“NOTLUSTIG”).

In the US animated series The Simpsons , the Grim Reaper or Death has the name Doug and appears several times.

The Grim Reaper also appears in the successful video game series The Sims to pick up a Sim who has reached the end of his life. This grim reaper can possibly be softened by relatives of the victim. In The Sims 3 , the Grim Reaper also has a name: Mephisto Schauder. In the video game "Darksiders 2" death, one of the four apocalyptic horsemen, is the playable protagonist. As a grim reaper with two sickles you have to save your brother from war. In the lesser-known video game The Guild, the Grim Reaper floats through town when the plague rages in town. At these times, workers in the player's factories often die, but usually not the player himself or his relatives and competitors. In games of the Castlevania series, the Grim Reaper often appears as Death as an ally of Dracula and as a boss opponent.

The Finnish melodic death metal band Children of Bodom uses the grim reaper as a kind of trademark, on each of their album covers a grim reaper is depicted with a scythe in his hands.

A farmer armed with a converted scythe in the Landsturm in the Polish revolutions of 1794, 1830/31 and 1848 was also named as the Grim Reaper (Polish Kośniczy ; German Koszinier (Sing.), Kosziniere (Plur.)) .