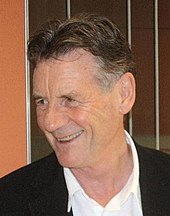 Monty Python [ ˌmɒnti ˈpaɪθən ] ( listen to ? / I ) was a British comedian group . It was founded in 1969 and had its heyday in the 1970s, in which the television series Monty Python's Flying Circus and several films, including The Life of Brian , were made. In 1983 the group disbanded for the time being. The last joint appearance of all six members took place in 1989 for the production of the anniversary compilation Parrot Sketch Not Included - 20 Years of Monty Python . After Graham Chapman's death in 1989, the remaining five members reappeared together in 2014. With the last show on July 20, 2014, the group broke up. Her humorous influence is still considered to be groundbreaking today and has been adapted and further developed by numerous comedians.

Cleese, Chapman and Idle studied at the University of Cambridge , Palin and Jones at the University of Oxford , where they gained their first experience in writing and performing comic sketches. All five had already worked for the BBC when Cleese proposed a collaboration in early 1969. The original group formation when writing scripts remained largely unchanged during the Monty Python period. Terry Jones later referred to this as "The Oxford-Cambridge Divide": Cleese mostly wrote with Chapman and Palin with Jones, while Idle did not belong to either team and, in addition to his own material, often contributed ideas for the structure of the individual shows. The sixth member, Terry Gilliam from the United States, came from Occidental College, Los Angeles. He was mainly characterized by his surreal cut-out animations , but also played smaller roles, mostly without text. In the course of time he took over directing the sketches and films more and more. Frequent employees of the group were Carol Cleveland , Connie Booth and Neil Innes , who starred in numerous skits of the "Flying Circus" and also in most of the movies.

From 1969 to 1974, the group shot 45 episodes (three seasons of 13 episodes each, one season of six episodes) of the series Monty Python's Flying Circus , in which skits and cartoon scenes were mixed for the BBC . The first broadcast aired on October 5, 1969 at 11:00 p.m. In 1971 and 1972, two German-language episodes were produced and broadcast as Monty Python's flying circus especially for German and Austrian television.

The name Monty Python's Flying Circus for the show series was only created in 1969 shortly before filming started at one of the last meetings in Cleese's apartment at the time on Basil Street in Kensington:

“Several zany titles resulted until John Cleese came up with the last name Python and Eric Idle remembered a character he had met in a pub years before. The stranger had been a dapper sort and every time he came into the pub he would ask the patrons, 'Has Monty been in yet?' Idle's compatriots liked the name and so the troupe and the show became Monty Python's Flying Circus. "

“Several crazy titles went around until John Cleese came up with the surname Python and Eric Idle remembered someone he'd met in a pub years earlier. The stranger was a smart guy and every time he walked into the pub he would ask the guests, 'Has Monty been here yet?' Idle's colleagues liked the name, and so the company and the show became Monty Python's Flying Circus . "

The series impressed with its extremely unusual, often absurd humor . Based on the expression " kafkaesk ", this style was also called "pythonesk". She is characterized by subtle and above all black humor . Both formally and in terms of content, the series is considered to be groundbreaking for the comedy genre. In particular, the renouncement of a final punch line after a particularly absurd scene was revolutionary and shaped the style. Skits and entire episodes were deliberately staged as a stream of consciousness , in contradiction to viewing habits . The fourth wall was also breached frequently. The absurdity of the sketches often concealed harsh social criticism. The theme tune from Monty Python's Flying Circus is also known : It is John Philip Sousa's march The Liberty Bell . After John Cleese had already toyed with the idea of ​​leaving the group after the second year, as he wanted more time for his own projects and also feared that the humor of the circus would become too predictable, he was finally in the fourth season - apart from two short appearances - no longer there. Only six episodes were created for this last season, with texts from Cleese being used with his consent.

After their time in television , Monty Python turned to the film , now again with the participation of Cleese. Monty Python's wonderful world of gravity (original title: And Now For Something Completely Different ) was shot for the cinema during the time of the Flying Circus . Almost without exception, it contained newly shot skits, which had already been shown in the Flying Circus . Directly afterwards, filming began in Scotland on the second film The Knights of the Coconut (original title: Monty Python and the Holy Grail ), a parody of the Arthurian legend and the genre of knight films. The film, shot on a very low budget, was successful with critics and audiences and made the group better known in the United States.

In 1979 the group shot their most influential and famous film, The Life of Brian . The film, produced by George Harrison , deals satirically and with black humor with religious and social issues and at the same time parodies the Bible films of the 1950s and 1960s: The protagonist Brian, born at the same time as Jesus of Nazareth , is repeatedly mistaken for the Messiah and finally crucified. British and American conservative Christians, among others, protested against the controversial content of the film, often on the erroneous assumption that Brian should be Jesus, who also appears briefly twice in the film. Some cinema operators did not include the film in their programs out of consideration for religious sensitivities.

1983 came with The Meaning of Life ( The Meaning of Life ), another film to the cinema. It was not a coherent plot, but a series of separate numbers. With Chapman, Idle and Cleese, three of the six members appeared in the pirate film parody Dotterbart ( Yellowbeard ) in the same year , with Chapman also participating in the script and playing the lead role. In the same year, the group initially ended their collaboration, among other things due to the deteriorating health of Graham Chapman, who suffered from severe alcoholism . When he died of cancer in 1989, the remaining group members gathered at the funeral service. Cleese and Palin made high-profile speeches, and they all sang the song Always Look on the Bright Side of Life . In 1998, the five members still alive performed together in Aspen, Colorado. The members were also successful individually as actors , writers or directors (even before their Monty Python days) and in some cases are still so today. The group also owns the production company Python (Monty) Pictures Limited .

Gilliam, Idle, Jones and Palin appeared together with Carol Cleveland and Neil Innes in 2002 at the memorial concert for George Harrison , because he had produced the film The Life of Brian with his company HandMade Films , which he founded especially for this purpose . Tom Hanks stepped in for a number for John Cleese, who was ill at the time .

The Monty Python musical Monty Python's Spamalot premiered on New York's Broadway in 2005 , and has been performed there regularly since then and also had several months of performances in London , Las Vegas and in the Cologne Musical Dome . Eric Idle was particularly involved in this production.

In 2012 the film Absolutely Anything (German title: Random omnipotent ) was announced. The film is based on an idea by Terry Jones, who also directed it. In the film, all living Monty Pythons give aliens their voices. The film has been described as a "science fiction farce". The work finally published in 2015, which is not considered an official Monty Python product, met with little enthusiasm from critics and fans.

In November 2013, Monty Python announced they were working on a joint show. The stage show Monty Python Live (mostly) , consisting of classic sketches and video recordings as well as numerous songs, was performed on ten evenings between July 1st and 20th, 2014 in the O₂-Arena in London. The last show, which was shown on July 20, 2014, was broadcast worldwide in selected cinemas and via livestream on the Internet and is also available on DVD or Blu-Ray.

Films in which several Monty Python members have appeared

These computer games were developed by 7th Level in collaboration with Eric Idle and Terry Gilliam. 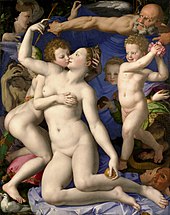