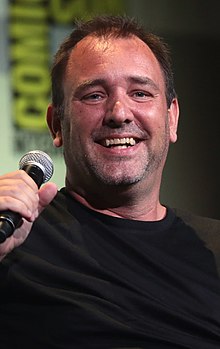 Randolph Severn "Trey" Parker III. (Born October 19, 1969 in Conifer, Colorado ) is an American actor , screenwriter , producer , voice actor , musician , director and composer . He is best known for the creator of the television series South Park , which he co-produced with friend Matt Stone .

Randolph Severn Parker III is the younger of two children from Randy and Sharon Parker. His older sister is called Shelly. The South Park characters of the Marsh family are based on them. Parker attended West Jefferson Junior High School in Conifer and Evergreen High School in Evergreen, where he was viewed more as a class clown by his classmates. In 1988 he graduated from Evergreen High School .

He then began studying music at Berklee College of Music in Boston . To study film, however, he moved to the University of Colorado in Boulder after a year , where he met Matt Stone. Together they developed various animation and short films , including The Spirit of Christmas - Jesus vs. Frosty . Parker failed to graduate because she spent too much time on her first major production, Cannibal! The Musical , Stone, on the other hand, completed his maths degree.

It was through this film that she became aware of Brian Graden from the television station FOX , who commissioned a video Christmas greeting card in 1995, whereupon Trey and Matt started the short film project The Spirit of Christmas - Jesus vs. Santa produced. This already contained Stan Marsh, Kyle Broflovski, Eric Cartman and Kenny McCormick, the main characters from South Park . One of the recipients of The Spirit of Christmas - Jesus vs. Santa made several hundred copies of it, and the animated film got around massively in Hollywood and on the Internet.

Parker and Stone were then hired by Comedy Central to put on a show based on the animated characters from The Spirit of Christmas : Jesus vs. Santa based design. The product of this is South Park . Although it was not well received in initial tests in front of viewers, Comedy Central decided to have six episodes produced initially. South Park made its debut on August 13, 1997 and became the most watched series on the network to date.

In the summer of 1999, South Park: The Movie - Bigger, Longer, Unedited was released by Parker and Stone. For the song Blame Canada he received an Oscar nomination together with Marc Shaiman .

Parker also starred in various films with Stone and produced a. a. the series Here Comes Bush! Her last film project was the film Team America: World Police , made entirely with puppets , which opened in the US in October 2004 and in German cinemas on December 30, 2004 .

Parker lives in Bel Air . In 2006 he married Emma Sugiyama, from whom he divorced in 2008. Parker wrote a satirical Broadway musical with Stone called The Book of Mormon . The premiere took place on March 24, 2011. The musical won 9 Tony Awards and a Grammy and received excellent reviews from critics.

Parker married Boogie Tillmon in 2014, who brought a son into the marriage. Their daughter was born in 2013. In 2019, Parker divorced Tillmon.

Parker is a member of the Libertarian Party .

In 1996 Trey Parker founded the band DVDA together with Matt Stone , which has not yet released any records. However, many of the songs in the South Park series and other films and productions by the two band founders come from her. Members include Trey Parker ( lead vocals , piano ), Matt Stone ( vocals , electric bass , percussion ), Bruce Howell ( guitar ), DA Young ( keyboard ) and Nels Dielman ( drums ).