Berklee College of Music in Boston

The Berklee College of Music is an independent music college in Boston , Massachusetts .

The school currently has 7,000 students. Annual tuition, excluding accommodation, is around $ 43,000, with each applicant automatically applying for a scholarship. Berklee has a high proportion of foreign students; more than 22.8% come from more than 70 countries. 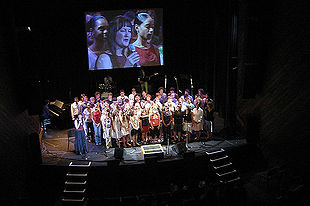 Berklee was founded in 1945 by Lawrence Berk as the Schillinger House of Music , named after his teacher Joseph Schillinger . The school's original purpose was to teach the Schillinger composition system. After an expansion of the school's curriculum in 1954, Berk changed the name to Berklee School of Music after his son Lee Berk and in reference to the name of the famous University of Berkeley . When the school received its accreditation in 1973, the name was changed to Berklee College of Music . However, the founder's son and namesake, Lee Berk, never studied music.

At the time of its inception, almost all music schools focused mainly on classical music. The original purpose of Berklee was to provide formal education in jazz , rock, and other contemporary music that was not available in other music schools.

Since the fall semester 2006 all students have to pass an entrance exam. This is a departure from the school's open admission principle that she has used for many years. The admission rate at Berklee College in 2012 was approximately 19%. The entrance examination can also be taken at partner institutions abroad. For the German-speaking area, this is possible at the Jazz & Rock Schools in Freiburg and in Ottobrunn near Munich.

Berklee College of Music, back entrance

The school has a large number of prominent teachers, staff, guest artists and former students. These include roughly (final year in brackets, alphabetically):