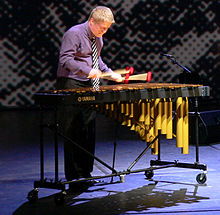 The vibraphone or vibraphone , a metallophone ( percussion instrument ), is a further development of the marimba with coordinated metal plates and an electrically driven device at the lower end of metal resonators, which creates a vibrato effect by evenly closing and opening a cover . The instrument has a "cold, metallic sound."

The vibraphone differs from the marimba in the material of the plates, which are made of a hard metal alloy instead of wood . As with the marimba, the metallophone and the xylophone, the plates are mounted in the area of ​​the vibration nodes of their basic resonance frequency. Their length is inversely proportional to the square root of the fundamental resonance frequency. Tuning is only required in the factory and is done by grinding, whereby it can be tuned higher or lower by reducing the mass or the rigidity.

Some sound bars removed: View into the tubes with the vibrato discs

The vibraphone is struck with mallets, the upper end of which consists of a round rubber head wrapped in yarn. The range usually covers three octaves from f to f 3 . Tuned resonance tubes hang under the plates to amplify the sound. With some vibraphones these are elongated under the high tones for optical reasons. But inside they are divided to get the acoustically correct length.

A forerunner of the vibraphone with movable tubes was developed by Hermann Winterhoff in the USA in 1916 and patented as "Steel Marimba". The design with rotating metal disks above the resonance tubes, which is widespread today, was created in 1921 under the name "Vibraharp". At the upper end of the resonance tubes, thin round plastic or metal disks rotate, which are attached to a common shaft and driven by an electric motor. Due to the rotation, all resonance tubes are periodically opened and closed, which gives the vibraphone its characteristic vibrato depending on the speed of rotation. The vibrato speed is usually adjustable. It is occasionally stated in scores or instructions such as “no motor” or “no vibrato” dictate that it be switched off.

In contrast to the pitch-changing vibrato in string instruments (changing the vibrating part of the string), a dynamic vibrato (actually a tremolo ) is generated in the vibraphone by opening and closing the rotating discs , as the length of the vibrating rods and the amplifying resonance tubes do not change becomes.

In addition, a damper can be operated via a pedal to regulate the duration of the sound, similar to the piano.

The vibraphone in jazz

Milt Jackson was made aware of the then new instrument by a teacher in 1939. He experimented before developing a third approach to the instrument by developing and playing soft mallets; He also reduced the rotating shaft from 10 to 3.3 revolutions per second. In this way he elicited an expressiveness from the vibraphone that was beyond what the instrument developers had intended: “The vibrato that I achieved on this instrument was very similar to the vibrato that I had in my voice as a singer. That fascinated me - and I gave up singing and four other instruments to focus on this one. ”The Modern Jazz Quartet, under the joint direction of Jackson and pianist John Lewis , contributed greatly to the recognition of the vibraphone with its jazz interpretations as a solo instrument. 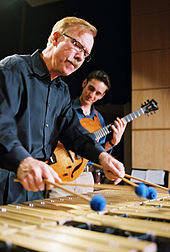 The Milt Jackson generation includes the vibraphonists Terry Gibbs , Teddy Charles , Victor Feldman , Manfred Burzlaff , later came Eddie Costa , Larry Bunker and Mike Mainieri, who died early . The sound ideal of Lem Winchester , who died in 1961, was followed by musicians such as Gary Burton , Tom van der Geld and Bobby Hutcherson , who revolutionized vibraphone playing and emancipated it from the father of the instrument "after 15 years of Milt Jackson rule" (Berendt / Huesmann) .

The percussionist Cal Tjader led the vibraphone in the Latin jazz and is still one of music's most influential vibraphonist. Under the direction of Martin Denny , Julius Wechter introduced the vibraphone to Hawaiian music and coined with him the musical style " Exotica ", which was popular in the 1950s and 1960s. In addition, the instrument found its place in the easy listening music of the 1960s and is still used in compositions today, primarily for atmospheric sound effects.

The vibraphone in classical music

The vibraphone is assigned to the percussion instruments in the “mallets” area. Thus it belongs to the musical study at all music education institutes (music colleges, conservatories, academies, vocational schools for music, ...) that offer the subject of drums. At all institutes, the course ends with a state final examination (Bachelor / Master). Some institutes offer special training in the field of jazz ( Berlin University of the Arts / David Friedman ; Nuremberg University of Music / Bill Molenhof ; Basel University of Music / Urs Wiesner).