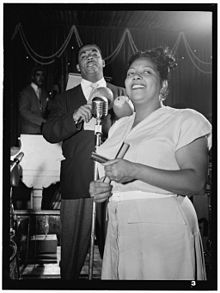 Latin jazz is a variety of modern jazz that is characterized above all by the adoption of rhythms and sometimes compositions from the repertoire of Latin American music . In the narrower sense, it is mainly a crossover between elements of jazz and different styles from the Caribbean , with Cuban music again being given a key position ( Afro Cuban Jazz ). In a broader sense, the term also includes influences from Brazilian popular music .

The Afro Cuban Jazz has evolved since the 1940s and is characterized by the inclusion of melodic and especially rhythmic elements of Afro-Cuban music in the swing and modern jazz from. Cubop , a mixture of Afro-Cuban rhythms and bebop, is considered an early form of Latin jazz . The style was developed in the forties, mainly through the collaboration of Dizzy Gillespie and Mario Bauzá and by Chico O'Farrill .

The Afro-Cuban rhythms are played with a large arsenal of percussion instruments - from the conga drums to the güiros to the claves . For the fusion with jazz, percussionists like Chano Pozo , who mainly worked in New York, were essential. Also worth mentioning are the recordings that Stan Kenton made with the rhythm section of Machito . The folk character of Afro-Cuban music is also reflected in the melodies of Afro Cuban jazz .

In the early 1960s, joined the US-American jazz musicians take the place of interest in the Afro Cuban Jazz an increased attention on the Brazilian Samba and Bossa Nova , engaged in sales success as Jazz Samba , Getz / Gilberto and The Girl from Ipanema were reflected . However, musicians from the Caribbean continued to maintain interest in a fusion of Caribbean and jazz music.

Jazz-related varieties of salsa music are cultivated in the Descarga by groups such as the Fania All Stars , the Tico All Stars or the Cesta All Stars with their jazz solos. 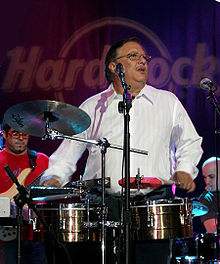 Arturo Sandoval at the Timbales (2010)

The abbreviation latin (from Latin American ) denotes many cultural phenomena in the USA that are closely related to Latin America . Above all, terms that are significant in the context of music and dance have been adopted into international linguistic usage .

The terminology used in relation to the Afro-American musical styles turns out to be not always meaningful and helpful, for example due to linguistic differences as well as cultural and sometimes political reservations. Among other things, it tends to conceal rather than clarify the fundamental close relationship between the main currents (jazz and blues from the USA, Cuban-Caribbean and Brazilian music ) and their uninterrupted mutual influence.

A determining factor in the history of Latin jazz turned out to be that those Latin American countries with only a small proportion of black populations had little or no contribution to the development of music.

Despite its close proximity to the USA, Mexico's music has found little echo in jazz. Even a recording such as Charles Mingus ' Tijuana Moods (1957), which bears the name of the Mexican border town in the title, primarily reflects Spanish and Caribbean music in the audible result. However, some originally Mexican boleros found their way into the jazz repertoire via Cuban music, a well-known example is Bésame mucho by Consuelo Velázquez .

The rich musical tradition of Argentina and Uruguay was also neglected by jazz for a long time. The work of Gato Barbieri was an exception, especially in the 1970s. Since about 1990, however, there has been a remarkable change here, originally due to the popularity of the compositions by Astor Piazzolla and Tango Nuevo . Whether this relatively modern “tango jazz” will be assigned to the broader genre of Latin jazz in the long term cannot yet be foreseen.