This article covers the genre of music. For further meanings see Be Bop .

The Bebop is a style of music, the early 1940s in jazz to swing replaced as the main style and thus the origin of the modern jazz formed. 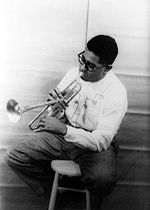 Miles Davis described Bebop as follows: “... it lacked the harmonies that you hummed to yourself on the street to get your girl in the right mood for kissing. The bebop didn't have the humanity of Duke Ellington . You couldn't even remember the melodies. "

With the bop the Jazz adopted as a popular music and is gradually as art music defined. This is based on the rejection of bebop by large sections of critics and the public as well as on a new understanding of the record as a medium. The musicians' fleeting improvisations are stored on the record and result in a collectivity and expertise - especially among the white American middle class and among European intellectuals. With the improved recording technology, the soloist emerges more than ever as an individual and an artist personality. Never again, however, did jazz fit into the image that had previously been made of it, into the image of a popular culture accessible to all.

It is likely that a combination of various factors led to the emergence of this new style. By the late 1930s, swing had become big business. The creative zenith of many swing orchestras had passed and the music threatened to freeze into formulas. Bored by the routine as "orchestra employees", numerous musicians began - often "after hours" after they had done their job in the big band - to meet for informal jam sessions . They played here and looked for musical forms beyond the big bands. A focal point of this development was Minton's Playhouse in Harlem and not 52nd Street in Manhattan , as is often wrongly claimed. The most important musicians in this circle included Dizzy Gillespie , Charlie Parker (who both played with Earl Hines and His Orchestra in 1943 ), Charlie Christian , Thelonious Monk and Kenny Clarke . It is also believed that the tax increase on dance events, which can be traced back to the USA's entry into the war in 1941 , gradually undermined the profitability of the big bands, thus accelerating the decline of swing and favoring the development of the new style in the form of autonomous art music.

The small bands that developed the new jazz style were not considered to be dancing or entertainment bands and neither were they in their self-image, which is why the owners of the nightclubs were not charged with the war-related special taxes when they engaged young bebop musicians with their combos . Because of the recording ban, there are no studio recordings from the development phase of this style; there are only a few private, technically very inadequate live recordings from "Minton's Playhouse" and "Monroe's Uptown House" . One of the earliest recordings of bebop is “Bu-Dee-Dah” (Apollo, February 16, 1944), conducted by Coleman Hawkins et al. a. with Dizzy Gillespie, Leo Parker , Budd Johnson , Ray Abrams , Don Byas , Clyde Hart , Oscar Pettiford and Max Roach .

It is also said that the bebop arose as a reaction of the African American population to the swing dominated by whites.

The origin of the word "bebop", as is so often the case in jazz, is not entirely clear and there are many legends about the origin of this term. It probably goes back to the onomatopoeic Scat syllables “be”, “re”, “de” and “bop”, with the help of which musicians used to sing complicated lines to each other at fast tempos. This is probably the most likely of all the explanations offered; whereby this name, as so often in music, does not come from the musicians themselves, but from the press.

If the connection is clear, it is also referred to as bop . The term rebop, on the other hand, arose out of a lack of understanding of the swing musicians of the time when it came to bebop and does not actually designate bebop. Likewise, in many cases the scattering is not bebop, but only syllable singing, which lacks the peculiar twists of bebop.

Features of the bebop

Quintet : trumpet , saxophone (mostly alto or tenor), piano , double bass , drums . Big bands were rather rare (the Dizzy Gillespie Orchestra is an exception ; Gene Krupa and His Orchestra also made attempts to play big band bop in 1947/48, such as the "Disc Jockey Jump" arranged by Gerry Mulligan ).