The title of this article is ambiguous. Further meanings are listed under Manhattan (disambiguation) . 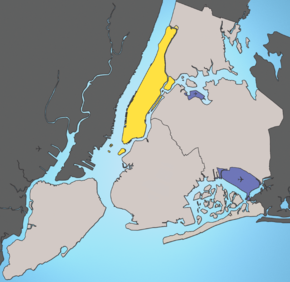 The borough of Manhattan, highlighted in yellow, is between the East River and the Hudson River (La Guardia in the north and JF Kennedy in the south are colored blue)

Manhattan from the air, October 2017

Manhattan is 13 miles long and between 1.3 and 3.7 kilometers wide. According to the United States Census Bureau , Manhattan has an area of ​​87.5 km², of which 59.5 km² are land and 28.0 km² are water. The highest natural point is Long Hill, Fort Washington / Bennett Park (184th Street and Fort Washington Boulevard) at 80.77 m, marked by a plaque.

Manhattan is connected to the mainland and the neighboring island to the east by bridges and tunnels: in the west with New Jersey , in the east with the boroughs Brooklyn and Queens on Long Island and in the northeast with the Bronx . The only direct connection to Staten Island is the Staten Island Ferry , whose terminal is at Battery Park .

East Side and West Side

The Central Park divides the central part of Manhattan in the Upper East Side and Upper West Side . This can be found in the street names, which are divided into East streets (east of 5th Avenue) and West streets (west of 5th Avenue). Fifth Avenue meets Central Park in the north, which from there divides east and west, and Washington Square Park in the south . From Washington Square Park, Broadway serves as a dividing street until the division into east and west in the more confused street network at the southern tip of the street disappears.

In addition to the Upper East Side, there is the Lower East Side on the eastern southern tip of Manhattan . The East Village to the north also originally belonged to this . The term Lower West Side is not in use. As a counterpart to the East Village, however, there is the West Village . To the south of the Upper East and Upper West Side, there are around a dozen other neighborhoods such as SoHo , Tribeca , Financial District , Gramercy Park , etc.

Accordingly, the term Lower Manhattan describes the "lower" and southwestern part of the island (south of Chambers Street ). Lower Manhattan includes the areas of City Hall , the Financial District as well as the site of the destroyed World Trade Center (Ground Zero) and its immediate surroundings. Lower Manhattan is the fourth largest downtown business and office complex in the United States.

At the beginning of the 19th century the city grew faster and faster; new residential areas should be developed. In 1811, the city planners decided with the Commissioners' Plan to cover the entire island of Manhattan, of which until then almost only the southern tip was built on, with a uniform, easily memorable road network (Engl .: grid ). The design of the ingeniously simple street grid (Randel plan) came from John Randel Jr. (1787-1865). It is also known as the Manhattan street grid .

The twelve north-south oriented longitudinal streets were given names with the addition "Avenue". The east-west oriented cross streets were generally given names with numbers increasing continuously to the north and the addition "Street". They are numbered from the south from Bleecker / Houston Street with ordinal numbers from 1st to 193rd in the north at the level of the Bronx .

The 5th Avenue divides the cross-roads of East and West, each side its own, 5th from the Ave. from ascending house numbering. For example, 10 East 42nd Street and 10 West 42nd Street are two different buildings. The Central Park lies in its north-south axis between the 59th Street and 110th Street . 5th Avenue forms its eastern edge. South of Houston Street, the naming was already completed. The other exceptions in the system were the existing Broadway as the central axis up to Central Park, Times Square and the freeway-like, the island almost completely enclosing West Street (partly 10th, 11th and 12th Avenue) and South Street or respectively the FDR-Drive as the easternmost traffic axis.

In Manhattan there are also a few east-west oriented streets that serve as a connection between tunnels or bridges beyond Manhattan: 36th Street to 40th Street between the Lincoln and Queens Midtown tunnels and the streets between Canal Street (at the Holland Tunnel ) and the feeders of the Williamsburg Bridge .

The same applies in the north of the island to the George Washington Bridge and its continuation in the Cross Bronx Expressway . Manhattan is only used as a bridge pillar on this side of the Hudson. 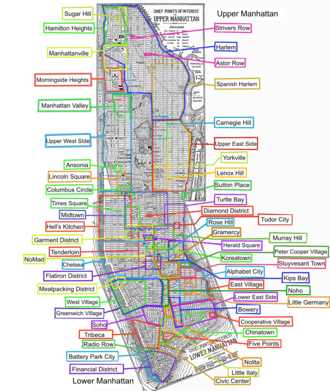 Location of the districts on a map from 1920

The island of Manhattan is administratively one of the five boroughs of the City of New York. This Borough / county consists of several parts of the city / neighborhoods ( neighborhoods ):

Manhattan has 1,636,268 inhabitants (2014). While the population of all other New York boroughs has risen sharply since the beginning of the 20th century, it has almost halved in Manhattan between 1910 and 1980. After 1950 in particular, the population steadily decreased as a result of suburbanization . Only since the mid-1980s has there been slight population growth again, which is currently 0.8% (annual average 2000–2008). The population density of 27,476 people per km² of land area is still the highest of all New York boroughs. 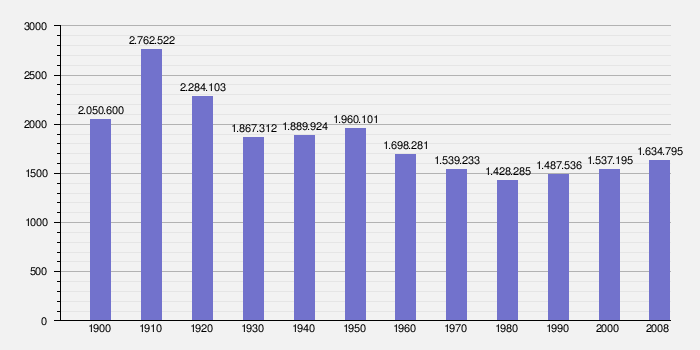 The census statistics only reflect the resident population . Due to commuters and visitors, the number of people in Manhattan increases to around 4 million on a typical working day and to 2.9 million on the weekend.

The composition of the population of Manhattan is less heterogeneous compared to the other boroughs of New York. The largest group are non-Hispanic whites at 48% (New York overall: 35%). The immigrants of European origin are mostly British , Irish , German , Italian and Russian .

Hispanics form the second largest population group with a total of 25%. At 14%, the proportion of non-Hispanic blacks or African-Americans is significantly lower than in New York as a whole (24%). The Asians are growing most group and now make up 11% of the population from Manhattan.

32% of Manhattan's residents were born outside of the United States, including 12.7% in Latin America (excluding Puerto Rico), 8.3% in Asia and 5.1% in Europe.

The following two tables show statistical data on the population groups / races and on the origin / descent of the inhabitants of Manhattan. All data are self-reported by the respondents.

1) excluding Basques , including Alsatians ; 2) Total 100.1% because more ancestry than inhabitants were given

English is 61% more widespread as a native language in Manhattan than in New York overall (52%). The second most important language is Spanish , which is used by 23% of the population at home. The other languages ​​together make up 16%. Overall, 18% of respondents say they don't speak English very well.

1) including Spanish Creole ; 2) including patois , Cajun and French Creole

The largest denomination in Manhattan is the Roman Catholic Church with 37% of the population. The proportion of Jews with 20% is the second highest of all American counties. Protestants from different directions make up 9% together. 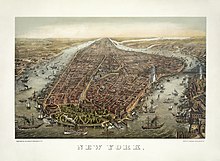 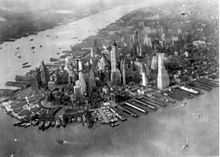 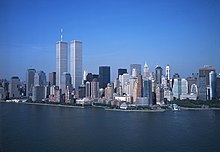 Downtown Manhattan's skyline prior to September 11, 2001

View of Manhattan from Brooklyn

The name Manhattan (originally Manna-hata or Mannahatta , but also the spellings Manados, Manahata, Manahtoes, Manhattos are guaranteed) comes from an Algonquin Indian language, the Lenape , and means something like "hilly land" or "land of many hills". A group of the Munsee Indian tribe was called Manhattan (see Lenni Lenape ). The Algonquin were the first inhabitants of Manhattan, with the Wickquaesgeck between Harlem Creek and Manhattanville inhabiting the north around 1600 and the Reckgawanck in the south of the island. However, both tribes had their main villages on the mainland, where the greater part of their area was located. In 1524 the Italian Giovanni da Verrazzano was the first European to sight the island of Manhattan. In the 17th century, Peter Minuit bought the island from the Indians for goods worth 60 Dutch guilders .

Manhattan was settled by Dutch people from 1624 (see Nieuw Amsterdam ). In 1667, in the Peace of Breda , the Netherlands left the island to the English. In exchange , they received Run , a small Indonesian island with which they could secure their spice monopoly for a century. The “Welikia Project” (also “Mannahatta Project”) tries to reconstruct New York City's original landscape from 400 years ago.

There are four National Monuments and three National Memorials in Manhattan . 90 places have the status of a National Historic Landmark . A total of 543 structures and sites in the county are registered in the National Register of Historic Places (as of February 17, 2018).

Here is a list of some of the most popular Manhattan attractions. See also the New York City article .

360 ° panorama, Manhattan from the Empire State Building by day

The islands of Manhattan are connected by 22 bridges and 21 tunnels to the mainland ( New Jersey in the west, Bronx in the north) and Long Island in the east. The following list is broken down according to the waters crossed and follows clockwise , starting in the northwest.

The Harlem River is a narrow inlet that connects the East River and the Hudson for over eight miles.
Bridges from northwest to southeast:

a Although it crosses the Harlem River (more precisely the Harlem River Ship Canal , completed in 1895), the Broadway Bridge connects two districts within Manhattan: Inwood in the south with Marble Hill in the north. The two bridges over Spuyten Duyvil Creek , which formed the natural course of the Harlem River around Marble Hill, were King's Bridge (first bridge in the city, 1693) and Dyckman Bridge (1759). This part was raised in 1914.

(separates the Bronx from Randall's Island)

from west to east:

from north to south: 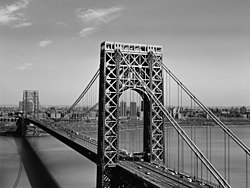 from south to north:

Counties in the US state of New York