View over the Upper East Side, September 2007 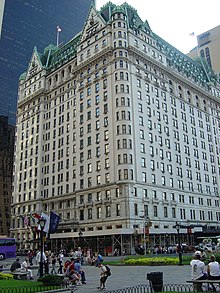 The Upper East Side covers an area of ​​approx. 4.7 km², the streetscape is characterized by elegant townhouses, especially on the western side near Central Park . To the north and east, the neighborhood is a more common Manhattan middle-class neighborhood. The Upper East Side was also called the Silk Stocking District because of the rich population .

Looking north from the Metropolitan Museum of Art on 5th Avenue 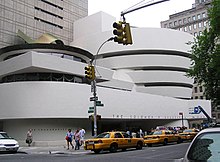 The Upper East Side has several museums on Fifth Avenue between 70th Street and 110th Street that together make up the Museum Mile . These include the Metropolitan Museum of Art , the Guggenheim Museum , the Neue Galerie , the National Academy Museum , the Cooper Hewitt Museum for Design, the Jewish Museum and the Frick Collection . Southeast of Museum Mile is the Whitney Museum of American Art on Madison Avenue and 75th Street on the Upper East Side.

In addition, the Goethe-Institut is located on 83rd Street on the Upper East Side and the New York Road Runners are located in the townhouse at 9 East 89th Street - in a block also known as Fred Lebow Place.

In addition to numerous schools, there are Rockefeller University , the Icahn School of Medicine at Mount Sinai and Hunter College on the Upper East Side.

As a film set

The district was and is a popular setting for the film industry. B. in the films Breakfast at Tiffany's , Live and Let Die , Men in Black ,  Twelve and Ice Cold Angels as well as in TV series such as The Nanny , Sex and the City and Gossip Girl . In addition, the Upper East Side is mentioned in the series Law & Order: Special Victims Unit and is also used as a filming location.