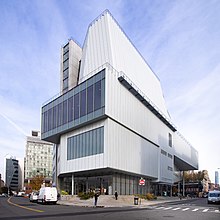 The Whitney Museum of American Art in the New York borough of Manhattan exhibits one of the most important collections of American art of the 20th and 21st centuries. Gertrude Vanderbilt Whitney founded the museum in 1931 with around 700 works of art that she owned. Its mission is described as "collecting, exploring, explaining and questioning" American art with an emphasis on living, contemporary artists.

The museum's first location was on 8th Street in Greenwich Village . There the museum first opened to the public in 1931. In 1954 the museum moved to 54th Street, not far from the Museum of Modern Art . In 1966, the company moved to the new building planned by Marcel Breuer and Hamilton P. Smith on Madison Avenue . The building is characterized by its step-shaped facade made of large gray granite stones and the outward-facing windows. The museum opened on May 1, 2015 in a new building designed by Renzo Piano in the Meatpacking District of Manhattan . The estimated construction costs amounted to 680 million US dollars . The previous Breuer building will be taken over by the Metropolitan Museum of Art .

The museum exhibits paintings , drawings , prints , sculptures , installations , video art and photographs . Every two years the Whitney Biennale provides information on the current state of the American art scene in a large-scale and internationally acclaimed exhibition. In 1978 the exhibition " New Image Painting " started the art movement of the same name.

The permanent collection includes more than 18,000 works of art by over 2,800 artists (as of 2011). The Whitney Museum provides an online database for indexing.

The museum preserves the entire estate of Edward Hopper's widow Josephine Verstille Nivison with over 3,100 works.

In June 2018 the Roy Lichtenstein Foundation donated around half of its holdings to the Whitney Museum, with around 400 works by the pop art artist. The Whitney thus holds by far the largest Lichtenstein collection, comparable only to its position in relation to the work of Edward Hopper.