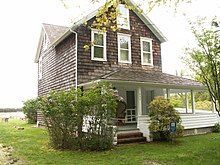 The Pollock-Krasner House and Studio in Springs, East Hampton is now one of the United States' National Historic Landmarks

Paul Jackson Pollock (born January 28, 1912 in Cody , Wyoming , † August 11, 1956 in East Hampton , New York ) was an American painter and an important exponent of abstract expressionism at the New York School .

Pollock became known for the style of action painting he founded . His large-format works, made using the drip painting process, earned him the nickname “Jack the Dripper” during his lifetime.

His contemporaries valued him for his deeply personal and uncompromising commitment to the art of painting. His work had a tremendous impact on many subsequent art movements in the United States. He is also one of the first American painters to be placed on a par with great modern European artists during his lifetime and afterwards .

Pollock was married to the painter Lee Krasner , with whom he had a studio community.

Jackson Pollock attended Manual Arts High School in Los Angeles from 1925 to 1927 with a focus on art and worked as a surveyor in California from 1927 to 1929 . From 1929 to 1931 he studied at the Art Students League in New York with Thomas Hart Benton , a leading regionalist . Representatives of this anti-modernist direction, which was successful during the time of the Great Depression, painted American subjects realistically and close to the people ( American Scene Painting ).

From 1930 to 1935 he traveled and stayed in the western states and made occasional visits to the Navaho Indians in New Mexico , before he moved to New York in 1935 and worked for the Federal Art Project of the WPA from 1938 to 1942 . He married Lee Krasner in October 1945. He became the most famous young painter for the American people in 1949 through a four-page report in Life magazine . He began to be sold as an ambassador for the wild, unbridled, democratic-free America in the beginning of the Cold War .

In 1950, Pollock was one of the three artists sent to the Venice Biennale . A little later, however, his alcoholism and psychological problems broke out again, causing a permanent blockade to work. In 1955 the Sidney Janis Gallery had to design its third Pollock solo exhibition after 1952 and 1954 as a retrospective because there were only three new pictures.

In 1956, under the influence of alcohol, Pollock caused a serious car accident with his convertible, which he did not survive. Ruth Kligman (1930–2010), his girlfriend at the time, who sat next to him as a passenger, was seriously injured, her friend Edith Metzger, who sat in the back, was killed.

Jackson Pollock is considered one of the most important visual artists of the 20th century. He influenced not only American but also European art. In the few years between 1946 and 1951, Pollock created, as the sources put it, "astonishingly cohesive and extraordinarily innovative work". Pollock's early work was clearly influenced by his teacher Benton as well as the works of the Mexican muralists (popular communist wall paintings ). Pollock's exploration of European modernism, cubism and surrealism expanded the spectrum of influences without finding his own style. The free color gradients of the Catalan painter Miró from the 1920s influenced him.

In particular, the experience of the work of Pablo Picasso determined his painting over a longer period in the late 1930s and early 1940s. During this time, Pollock painted large, expressive pictures with indigenous motifs. Just as Cubism by Braque and Picasso is based on the "primitive" or original forms of African sculpture, Pollock referred to Indian and Eskimo motifs. In his dealings with CG Jung, he was primarily interested in the view that the unconscious is the source of art. In the mythological, totemic symbols of the Indians, he saw the connection between the unconscious and artistic expression that Jung meant. The exhibition "Indian Art of the United States" in the Museum of Modern Art in 1941, as well as the art magazine DYN published by the surrealist Wolfgang Paalen in exile in Mexico , especially his article "Totem Art" in DYN 4-5, played in 1943. In the 1943 paintings Die Wölfin (Museum of Modern Art) and The Guardians of the Secret ( San Francisco Museum of Modern Art ), Pollock brought individual characters onto the canvas that seem to be freely scattered. These are concentrated images that express the sum of his artistic and subjective experiences over the past few years. The turning point towards its abstract masterpiece marked the image of birth ( Birth ) from 1941. However, although the motive dominated an Inuit mask and standing in formal proximity to Picasso, but the thick part impasto application of paint already took material aspects of his later works anticipate. Above all, Pollock achieved a consistent rhythm in birth , which is characteristic of his main work.

Pollock had been in contact with the later painters of the "New York School" since 1942, among others. Willem de Kooning and Robert Motherwell . A year later, the New York gallery owner Peggy Guggenheim took Pollock under an exclusive contract for a monthly salary of 150 US dollars and exhibited his works in her gallery Art of This Century in New York. At that time these were clearly surrealistic in orientation and followed the Écriture automatique , an automatic painting that was deliberately detached from the will and with which the inner world of the artist was to be reflected. It was through this painterly attitude that Pollock finally achieved his own personal style. He turned away from the figurative, from all elements in general that had references to reality.

From 1946 Pollock developed the dripping technique (he let paint drip and flow onto the canvas lying on the floor, poured, sprinkled and spatula so that structures, rhythms and patterns formed from paint splatters and flows; in many cases he no longer wore the paint with a brush, but let it flow from a hole in the bottom of a paint can). With these paintings Jackson Pollock inscribed himself in the history of art and became one of the most important American artists of the modern era . His pictures live from contrast and want to express the contradicting contrast between body and soul. As with all action painting artists, the production process of the work of art is in the foreground.

The works are completely free, and it is also the act of painting that made this style of abstract expressionism so popular. Using this technique of action painting , Pollock created complex, interwoven color structures, as in Cathedral (1947, Dallas Museum of Art ).

In the documentary Max Ernst: My Vagabonding - My Unrest , Max Ernst stated that it was he who gave Pollock the idea of ​​“dripping paints”.

From 1950 onwards, Pollock's style changed again: he created large compositions in black and white, crisscrossing white canvases with brown and black colored lines. The works of this last creative period include The Depth (Museum Springs, Long Island ). This year, the photographer Hans Namuth, who emigrated from Germany, photographed the artist at work in his studio and created a film in the course of the collaboration. The series of photos published in an American art magazine the following year became legendary and helped establish the Pollock myth. After 1951 hardly any works were created and from 1953 Pollock returned to brushwork and figurative painting. Towards the end of 1954, Pollock gave up painting.

In the 1960s, the late Miró, who had a strong influence on Pollock, was in turn influenced by him.

Pollock is considered one of the most important American abstract expressionists. Works by him can be found in the major museums in the USA and Europe. With his drip-paintings he succeeded in creating an independent work without a model. His success helped North American modernism cut its umbilical cord to Europe. Pollock's works were shown in Kassel at documenta II (1959) in a room exclusively dedicated to him and at documenta III (1964).

In 1964 Werner Schmalenbach acquired the exemplary painting Number 32 from 1950, one of his major monumental works (2.69 × 4.575 m), exhibited at documenta III , for the North Rhine-Westphalia Art Collection in Düsseldorf at a price of DM 650,000, a price that at that time Time caused a stir and criticism.

In May 2005, 32 previously unknown paintings by Jackson Pollock were discovered in a New York warehouse. The find is considered a sensation in contemporary art history. The pictures were found by the film author Alex Matter after he had come across them four years earlier in the estate of his father Herbert Matter . The photographer and graphic designer Herbert Matter had been friends with Pollock and Lee Krasner for many years, and Alex Matter had known Pollock from childhood.

“The finds were wrapped in brown wrapping paper and were found next to personal documents, photographs and works by Philip Guston and Willem de Kooning in a New York warehouse, Matter reported in New York. 22 of the typical Pollock drip paintings as well as ten enamel pictures and studies have slumbered there since his father stored the works in the warehouse of a shipping company in East Hampton, Long Island in 1958. "

His painting No. 5, 1948 was once the most expensive picture in the world. According to a New York Times report on November 2, 2006, the painting was sold to a Mexican by then owner David Geffen in a private transaction for $ 140 million. The entrepreneur David Martinez is believed to be the buyer .

From November 25, 2015 to April 10, 2016, the Deutsche Bank KunstHalle is exhibiting Pollock's work Mural under the title Energy Made Visible in Berlin .

2017 was the Pollock year in the city of Mülheim an der Ruhr . Under the title "Jackson Pollock Visiting" " exhibitions, performances and workshops took place in the Galerie an der Ruhr all year round as a tribute to the artist.