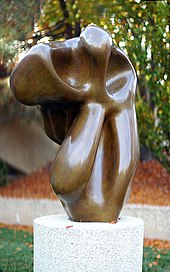 The documenta III international exhibition was last staged in Kassel from June 27 to October 5, 1964 under the sole direction of the duo Arnold Bode and Werner Haftmann . The subtitle “International Exhibition” showed that it wanted to say goodbye to the “documentary character” of its two predecessors. The documenta III aimed neither at a historical panorama - like the first - nor at the breadth of contemporary production like the II. Documenta. 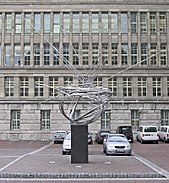 Norbert Kricke : Grosse Mannesmann (1958/61), then in front of the orangery, now in Düsseldorf

After the great success of documenta 1 and documenta II , the institutionalization of documenta as an international exhibition series for contemporary art was only logical. The III. documenta is planned for 1963 (every four years). Dispute over organizational and (power) issues within the carrier company documenta GmbH (the country Hessen had become co-partners) and the desire Arnold Bode , the Wilhelmshöhe Castle in the exhibition include (whose restoration was delayed), led to a realization the III. documenta in 1963 was no longer possible.

Bode and Haftmann wanted to join the III. documenta the restriction to ' quality ' and ' relevance ':

“Documenta III has a different approach, it no longer engages with argument and group. It is based on the simple principle that art is what great artists do. It relies on the individual personality. It depends on the sequence of priorities. Without any preconceived intention of linking, she places work next to work, individuality next to individuality. "

There were fears that the III. documenta could pale next to the parallel Venice Biennale and this could also have an impact on the number of visitors. Both assumptions were wrong. The documenta clearly asserted itself as the “more important” of the two international art exhibitions and set a new record with 200,000 visitors.

For the first time, the term “ Museum of 100 Days ” is coined at documenta III , which should become the leitmotif for all upcoming documents and the motto of the world exhibition of contemporary art:

“I would like to call documenta III the“ Museum of 100 Days ”in Kassel. Here, the achievements of 20th century art are visibly demonstrated not in an imaginary, but in a real museum. "

The proven Museum Fridericianum and the ruins of the orangery and the open-air area around the orangery were again the focus of the exhibition. For the first time, the “old” gallery on the Schönen Aussicht, today's Neue Galerie , was included as an exhibition space.

The two exhibition departments Graphics and Industrial Design opened late on August 22, 1964 in the rooms of the Staatliche Werkkunstschule Kassel on the edge of the Karlsaue .

“ With documenta 3 in 1964, Arnold Bode certainly reached the climax of his 'architectural spatial direction'. More than ever and more explicitly, the focus of this exhibition is the experience of art, the delicately staged relationship between space, sculpture, image and architecture, while the issue of communication takes a back seat. Bode is concerned with a seeing understanding, which he seeks to promote with a presentation of the contributions that is as museum-like, auratic distance as it is adventurous and daring . "

The works of art 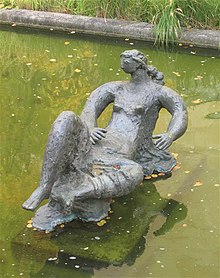 Werner Haftmann dedicated the III. documenta entirely to the ( great ) artist and the ( important ) work. Recent developments in art have been given a chance, e.g. B. The beginnings of Pop Art were exhibited, but rather tolerated by Haftmann than shown with passion. Documenta III was divided into 5 so-called departments :

Image and sculpture in space

In the “Image and Sculpture in Space” department, the question of the relationship between artwork and space was re-posed. Spaces were created that were individually defined for each work of art and entered into a symbiosis with art. This department was essentially reserved for artists born between 1910 and 1945. What remained of lasting memory was the revolutionary hanging of the “ 3 Pictures in the Room ” by Ernst Wilhelm Nay , which Bode had installed under the ceiling, or the Sam Francis room on the upper floor of the Fridericianum, which realized a dramatic staging of painting, sculpture and space .

In the master cabinets on the upper floor of the gallery at the Schöne Aussicht, 10 to 15 works were shown by 29 important artists. It was not about chronological staging, but about groups of works and individual works in the sense of a characteristic aspect. Great artists such as Jean Arp , Max Beckmann , Marc Chagall , Alberto Giacometti , Oskar Kokoschka , Marino Marini , Emil Nolde , Pablo Picasso , Chaim Soutine and Wols were represented in the master cabinets .

In the gallery at Schöne Aussicht, Werner Haftmann left hand drawings from 80 years of art history on the ground floor . In particular, the compilation of the hand drawings is considered to be an important art-historical staging and the “Hand Drawings” department went down in art history as an important individual event.

The “ Light and Movement ” exhibition department , which Arnold Bode single-handedly staged in the top floor of the Fridericianum without the support of the documenta council: “ For many, the only utopian spark of documenta III ”. On the second floor, Bode had also gathered young artists for the first time who encountered the statics of the visual arts with mechanical movement and light spectacles and whose works, listed as Kinetic Art , also partly pointed the way for Op Art of the 1960s. This department presented works by Harry Kramer , Nicolas Schöffer , Jesús Rafael Soto and Jean Tinguely , as well as those by Heinz Mack , Otto Piene and Günther Uecker , members of the artist group ZERO , as well as the room productions of the Parisian Groupe de Recherche d'Art Visuel .

In the 1964 Aspects Department , the works of younger, sometimes less well-known artists were exhibited. New trends came to light and the focus, which in the main exhibition was still on abstraction, was not applied in this department. The continuation of the Informel was shown, but also the new concept of reality in object art . In this department, too, the aim was not to create a panorama, but to make a quality selection.

Only after a slight delay, on August 22nd, 1964, the 6th (double) department “Industrial Design” and “Graphics” opened in the building of the Staatliche Werkkunstschule on the edge of the Karlsaue. The overall responsibility for this exhibition area lay with the then director of the Staatliche Werkkunstschule Kassel, Jupp Ernst . With this thematic expansion of his documenta, Arnold Bode wanted to put " the neighbors between painting, sculpture and hand drawings of the present and their peripheral areas that shape the environment of our everyday life up for discussion."

The Industrial Design department was organized by Jupp Ernst, who also worked as an exhibition architect. Ernst had huge, low tables built that were covered with teak veneer. The sophisticated technical devices were displayed on these tables. Huge, specially designed lighting elements made from an aluminum grid system hung above the tables. Works by 20 international designers were shown. Products from Braun , IBM and Olivetti , for example , were shown alongside tea and coffee pots and cutlery from Kay Bojesen or chairs from Arne Jacobsen , Charles Eames or Gerrit Rietveld . 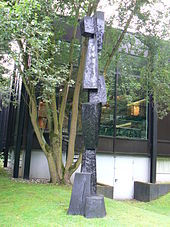 The graphics department, described as “ very lively ”, mainly showed posters, selected by Karl Oskar Blase , as contemporary works, in addition to some very rare specimens that had been put together from various museums and collections.

Classics of poster art such as El Lissitzky , AM Cassandre or Marc Chagall , hung alongside representatives of Japanese graphic design such as Hara Hiromu , Kamekura Yūsaku , Kōno Takashi , Ikkō Tanaka or Ryūichi Yamashiro with his poster “ Hayashi-Mori ”, the HAP Grieshaber as “that most beautiful poster in the world ”. Polish poster art with Roman Cieślewicz , Jan Lenica , Waldemar Świerzy and Stanisław Zagórski was shown alongside international and German avant-garde such as Klaus Burkhardt , Will Burtin , Hans Georg Hillmann , Herbert W. Kapitzki , Josua Reichert and Jan Tschichold .

A total of 361 artists took part in the exhibition: