Jean Tinguely (also: Jeannot ; * May 22, 1925 in Freiburg / Friborg ; † August 30, 1991 in Bern ; entitled to live in La Roche , Pont-la-Ville and Basel , from 1985 honorary citizen of Freiburg / Friborg ) was a Swiss painter and sculptor of the Nouveau Réalisme . He is considered one of the main representatives of kinetic art . Tinguely was best known for his moving, machine-like sculptures. 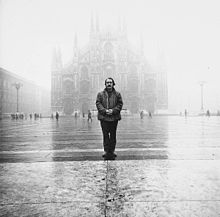 Tinguely grew up in Basel's Gundeldinger district and first attended schools in Basel before training as a decorator from 1941 to 1944 and taking courses at the general trade school in Basel . During this time he met Daniel Spoerri , with whom he was working on a theater project.

In 1951 Tinguely married Eva Aeppli , with whom he moved to Paris the following year . Shortly after Tinguely moved to Impasse Ronsin near Constantin Brâncuși's studio in 1955 , he met Yves Klein and Niki de Saint Phalle , whom he married for a second time in 1971. He had a long friendship with the iron sculptor Bernhard Luginbühl . With him and other artists as well as with his wife Niki de Saint Phalle he realized various joint projects. The gallery owners Iris Clert in Paris and Alexander Iolas in New York contributed significantly to the spread of Tinguely's work .

Tinguely had already used wire figures as shop window decorations in his first job. His first free works of art took up this means again. He first set these figures in motion in 1954. He began his extensive work with fragile and shaky wire and sheet metal compositions. The sheet metal parts usually have a colorful painting. In his machine sculptures he took up abstract elements by Kasimir Malewitsch , Wassily Kandinsky and Auguste Herbin and went beyond them by “questioning the definitive color-form constellation, which was previously a matter of course”. In 1955, Tinguely invented and built drawing machines that could produce machine drawings on paper formats and webs. When these imitated the style of Jackson Pollock or Georges Mathieu , "[Tinguely] ironizes the work process and the artistic genius". Tinguely's moving sculptures are experienced by the viewer as highly active, touching, cheerful and playful, often as funny and sometimes also as melancholy. In 1960 he became a member of the Nouveaux Réalistes artists' association , which was founded that year under the direction of Pierre Restany . In the same year he began to use " found objects " in his works.

In 1960 a gigantic machine in the garden of the Museum of Modern Art , New York, which was assembled from scrap and was able to destroy itself , also caused a stir . This auto-destructive art was in the context of Gustav Metzger's "Manifesto of auto-destructive art".

In the following years he developed - often in collaboration with artist colleagues - large, movable machines. They are understood as “a creative use of industrial material and a contemporary artistic expression of the machine age”, but according to the artist they should also represent “criticism of the uniformity of industrial processes and the production of useless things”. In 1977 Tinguely began designing fountains; flowing, splashing and, in winter, freezing water became an increasingly important part of his work. From 1981 Tinguely also included animal materials in his installations. Bones, skulls and horns are mounted on scrap motorcycle that killed a driver in an accident. Tinguely refers to transience and death. After Josef Mengele's corpse was identified in 1986, the “Mengele Death Theater” was created, a multi-part installation made from the rubble of a burned down farmhouse. A fountain design planned for the Zeil in Frankfurt with a skeletonized herd of cattle made of steel in a water basin (dance of death) was no longer realized due to Tinguely's illness.

In his late work, Tinguely expanded his artistic forms of expression to include light. In 1991 the Luminator was created , a light sculpture for the Basel SBB train station , which - after a renovation - is currently installed in Basel-Mulhouse Airport (Swiss side on the upper floor).

He took part in the Dylaby exhibition in Amsterdam with Niki de Saint Phalle in 1962 and was represented as an artist at documenta III in Kassel in 1964, at the 4th documenta in 1968 and at documenta 6 (1977). He enjoyed an international reputation and received the Wilhelm Lehmbruck Prize of the City of Duisburg in 1976 and the Art Prize of the City of Basel in 1980 . In 1990 a Tinguely exhibition took place in the Tretyakov Gallery in Moscow .

In the last year of his life, Tinguely created the large hanging sculpture La Cascade in Charlotte (North Carolina) in the USA .

Jean Tinguely died of heart disease in 1991 at the age of 66 in the Inselspital in Bern. He is buried in the cemetery of Neyruz , canton Friborg, Switzerland, where he settled in 1968. A movable installation is placed on his grave.

In Tinguely's hometown of Basel, a large part of his works has been exhibited in the Tinguely Museum named after him since 1996 . 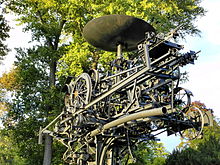 Heureka on the Zürichhorn , Zurich