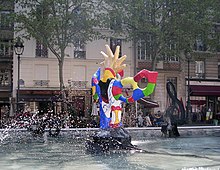 Partial view of the Stravinsky Fountain in Paris

The Stravinsky Fountain from a different perspective

The Stravinsky Fountain , also known as the Tinguely Fountain , is a fountain on Igor Stravinsky Square ( Place Igor Stravinski ) at the Center Georges Pompidou in Paris . It was designed by the Swiss sculptor Jean Tinguely together with his partner, the French artist Niki de Saint Phalle , and executed in 1982/83.

The fountain named after Igor Stravinsky consists of 16 movable and water-spouting individual sculptures , which are distributed in a huge water basin (36 × 16.50 × 0.35 m). Their design relates to the most important compositions of the Russian musician. Each of the two artists brought their own personal signature: Tinguely developed black technical machine sculptures made of iron, Saint Phalle designed colorful mythical creatures and Nanas , their typical plump female figures. These two poles form an exciting contrast and at the same time a playful and cheerful unit.

In 1983 "one fountain created another fountain", as the composer Pierre Boulez put it. Boulez was convinced that only Tinguely's magical water features could bring to life the desolate square named after Igor Stravinsky next to the Center Pompidou in Paris, under which the Institut de Recherche et de Coordination Acoustique / Musique ( IRCAM ) is hidden.

Tinguely only accepted the assignment on the condition that his partner Niki de Saint Phalle could work with him. The second reason he said was: “I did it because I fell in love with Madame Pompidou.” He was of the opinion that his wife had to use colors and shapes to create a harmonious “visual” together with his dark-black machine designs River ”between the futuristic, colorful building, the Center Pompidou, on one side and the gray, gloomy, Gothic facade of the Saint-Merri church on the other.

The Saint-Merri church and the fountain

Some technical problems arose during production, due to the location, which made the construction of the fountain more complicated. To reduce weight, Tinguely's sculptures were constructed from aluminum , those by Niki de Saint Phalles from lighter fiberglass and polyester . The water level of the pool was kept as low as possible.

The music of the composer Igor Stravinsky, which is closely linked to dance and Russian folk tunes and fairy tales , offered the two artists a rich thematic repertoire. The resulting fountain resembles the colorful pages of a Russian children's book. The instruments selected in the interests of the composer form patterns from the sounds of the water, which emerge from the sculptures in a confusing variety.

On June 19, 1983, the inauguration of the fountain took place in the Musée d'Art Moderne .