The thread newt ( Lissotriton helveticus , syn .: Triturus helveticus , see: Triturus ) is a tailed amphibian from the family of real salamanders and newts (Salamandridae).

The thread newt is a small, delicate newt - the males are 8.5 centimeters long, the females 9.5 centimeters. The back is brown, the flanks are yellow-brown in color. The ventral side is light yellow at the mating season and has no spots in the middle. The throat is pearly to flesh-colored without points (compare against it: pond newt ). Females in traditional costume and young animals sometimes have a red line on their back. The males show in the water dress one up to eight millimeters long thread at the tail end and have strikingly large, dark webbed hind feet. Your enlarged cloaca is darkly pigmented. With the inconspicuous females there is a high risk of confusion with those of the pond newt (see there); however, apart from wooded regions in the Atlantic low mountain range, the newt is much rarer. Thread newts of both sexes often appear somewhat more "angular" than pond newts due to the protruding back gland ridges.

Spread of the thread newt

The species is an Atlantic to sub-Atlantic fauna element with the main distribution in France . In addition, the British main island , the Benelux countries , parts of Germany, Switzerland and the northern Iberian Peninsula are settled. Within Germany, thread newts occur mainly in the western part, for example in southern Lower Saxony , parts of North Rhine-Westphalia , Saarland , Rhineland-Palatinate , Hesse and Baden-Württemberg . The easternmost outposts of the distribution are in the Ore Mountains as well as in the Thuringian Forest and Harz . There are also some island-like occurrences in the northwestern German lowlands. B. in the Lüneburg Heath and in Ammerland . The northeastern distribution limit is the same - glacial valley . 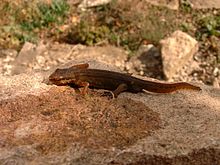 The main habitat are contiguous deciduous forest areas in the low mountain ranges . There, cool, mostly sunny to partially shaded, small bodies of water are sought out for reproduction, including backwater and spring water as well as water-filled lanes on forest paths. Completely shaded and vegetationless waters are more likely to be avoided. The species is often associated with the mountain newt. The adults stay in the water from the beginning of the annual activity time - in Central Europe: February / March - until early summer; the actual spawning season extends from March to May. (For courtship and mating behavior, compare the explanations under the pond newt , northern crested newt and triturus .) Then they return to their land habitats , where they rest under tree stumps, stones or fallen leaves during the day and hunt for insects, worms and similar small animals at night. In the spawning waters, like all newts, they also eat insect larvae, water lice, but also newt eggs and larvae (including their own species) and frog spawn .

The larvae, which develop from a maximum of 450 individual eggs that a female can produce per season, need about two to three months to metamorphose after an embryonic phase of three to four weeks . Until then, the larvae, which cannot be distinguished from those of the pond newt, feed mainly on small crabs and mosquito larvae. After they go ashore, when they are 30 to 40 millimeters long, it takes until they are two years old before they reach sexual maturity.

Until a further division of the genus Triturus was made in recent years , the thread newt was also listed in this genus, which comprised up to 15 species. However, the traditional name Triturus helveticus is still sometimes used.

Several subspecies are distinguished within the total distribution area:

Particularly during seasonal migrations, for example from winter quarters to spawning waters, newts and other amphibians suffer losses from road traffic in many places in densely populated Central Europe.

(in some Red Lists of the federal states, however, classification in different hazard categories)