The island of Great Britain is located in the Atlantic Ocean , between the Irish Sea and the North Atlantic in the west, the North Sea in the east and the English Channel in the southeast, on the northwest coast of the European continent.

With an area of ​​219,331  km² , the main island is the ninth largest island in the world and the largest island in Europe and the British Isles , which also include Ireland and the Isle of Man . In ancient times England and Wales formed the Roman province of Britannia .

Chalk coast on the English Channel

An old name for the island of Great Britain is " Albion ". This name, translated as "White Land" by Alfred Holder ( Alt-Keltischer Sprachschatz , 1896), could refer to the white chalk cliffs of Dover that are normally the first thing to see when sailing across the English Channel to Great Britain. An historic Gaelic name for Scotland is Alba .

Historically, there were two Britain: the island of [Great] Britain and the peninsula of Lesser Britain in northwestern France (now called Brittany ). In English they are referred to as Great Britain and Brittany ; in French there is a similar distinction between Grande Bretagne and Bretagne .

Origin and changes of the name "Great Britain"

Quantity diagram showing the parts of the British Isles: 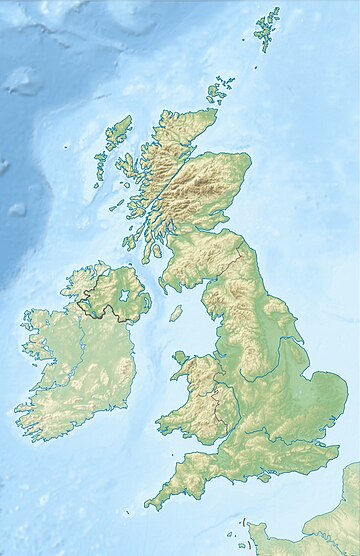 The term Great Britain first found widespread use during the reign of King James VI. of Scotland , who ruled England as James I; it referred to the island ruled by a monarch, which consisted of two states with their own parliaments. After the unification of England and Scotland, the term Kingdom of Great Britain was in use from 1707 to 1800.

To simplify matters, the term “Great Britain” is often used as a synonym for the United Kingdom, especially by the media and for unofficial statements by politicians. The organs of government in the United Kingdom are referred to as "British": "The British Prime Minister" or "The British Royalty". "Great Britain" also stands for Northern Ireland, which is of course geographically not part of the island. The frequently used term "English" instead of "British" in the same place is even more imprecise, as England is again only part of Great Britain.

In the Yorkshire Dales on the east side of the Pennines

The outermost points of the island are Land's End in Cornwall in the southwest and John o 'Groats in Caithness in northern Scotland.

England is mostly hilly. South and East England are a layered landscape and, apart from small coastal plains, are the geologically youngest part of the island. The only extensive plain is the Fens between Cambridge and the Wash on the border between East and Central England. The Pennines (Pennine Range) in the north of England merge almost seamlessly into the Uplands of southern Scotland. To the east there are again hilly lands. The middle of Scotland consists of the Firth of Clyde and Firth of Forth connecting moat of the Central Lowlands and a north-east adjoining hill country. In addition to the rough mountainous region, the Scottish Highlands to the north also include over 80 islands to the west and north, which are also rough, but not always high, which is why one also speaks of Highlands and Islands . Wales , separated from south-west England by the inlet known as the Bristol Channel , is also a mountainous country.

The island of Great Britain consists of the following three nations (parts of the country), which are only politically independent to a very limited extent:

Settlement and land use

Industrial agglomerations are Greater London , the area around Birmingham , the old coal areas that are grouped in a U-shape around the Pennines , South Wales and the cross valley in the middle of Scotland . The hilly countries with their hedge-lined lands and often small country roads are characterized by a history of intensive use, which, however, gave way to grassland management in many places in the 19th century with the possibility of importing staple foods on a large scale . The mountainous regions are sparsely populated and are extensively grazed. In the north and west of Scotland, a large part of the indigenous rural population was expelled for extensive sheep farming in the 18th and early 19th centuries ( Highland Clearances ). Centuries of overexploitation of forests has only been remedied to a small extent in the last few decades by afforestation .