This article covers the English county. For other meanings, see Cornwall (disambiguation) . 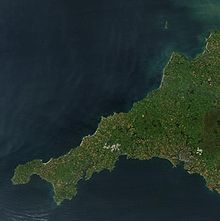 Cornwall [ ˈkɔːnwəl ] ( korn. Kernow [ ˈkɛrnɔʊ̯ ], German also Kornwall or obsolete Kornwales or Cornwallis ) is a county and the most south-westerly part of England within the United Kingdom . 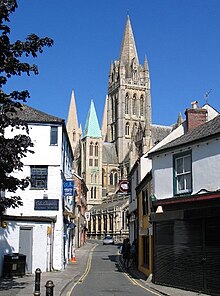 Truro , the administrative seat of Cornwall

Cornwall is part of the South West Peninsula and borders in the east on the county of Devon , to which the rest of the peninsula belongs. The border river is the Tamar . The main connecting roads to the east are the A30 and A38. A car ferry connects Plymouth with Torpoint . The main railway line from London runs on the south coast. The route ends in Penzance .

Cornwall is home to the westernmost and southernmost points of England, namely Land's End and Lizard Point (on The Lizard Peninsula ). Cornwall is surrounded by water on three sides by the Atlantic Ocean , the English Channel and the Celtic Sea . Rough, steep cliffs, with long beaches and picturesque bays (Engl. Cove ) alternate, shape the coastal landscape. The highest point of Cornwall with 420  m ASL is Brown Willy .

The maritime climate is temperate with a lot of precipitation, the winters are particularly mild (influence of the North Atlantic Current ). This means that Mediterranean plants can also grow in sheltered places. Due to the climatic characteristics, there are numerous well-known gardens with subtropical plants.

Cornwall has been inhabited since the Paleolithic . In the Neolithic Age , farmers and fishermen immigrated from the continent, who left barrows at Bodmin and Penwith . At the end of the Neolithic Age, the continental influence gave rise to the bell-beaker culture , in which copper was processed.

In the 6th century BC The Celtic British came to the country from the east and brought with them the knowledge of iron production and processing. The Romans conquered Britain in AD 43 and ruled the country until the end of the 4th century. The Chysauster complex is a relic from that period.

In the following time the Celts fought with each other until, according to legend, they were pacified by King Arthur . The Arthurian legend of King Arthur was in the in Cornwall Castle Tintagel Castle begotten where excavations between 1990 and 1999 a noble residence of having the fifth opened up to the seventh century, who clung to the Roman and consequently Christian tradition and entertained proven contacts with the Mediterranean. The current castle ruins from 1230 were probably built as a representative building in relation to the Arthurian legend and fell into disrepair again in the 15th century.

The Christianization of Cornwall began in the 5th century by Irish, Welsh and Breton missionaries.

Cornwall remained Celtic even during the Anglo-Saxon era. The conquest of England in 1066 by the Normans under their leader William the Conqueror brought Cornwall under Norman rule in 1072. The Cornishmen, however, retained their language and identity. The English King Edward III. made Cornwall a county with a certain special status.

During the Middle Ages, Cornwall was the only part of what is now England that was not settled by Anglo-Saxons , but remained Celtic. In 1858, the Attorney General to the Duchy of Cornwall, Sir George Harrison, stated in a dispute over the coastal waters between Cornwall and the English Crown that Cornwall was a Palatinate State that was extraterritorial to the English Crown . Today Cornwall is administratively treated as a county of England.

The Cornish economy was based on traditional occupations such as fishing and mining. The decline of these areas also created major economic problems. Agriculture is still very important in Cornwall today. The share in the regional gross value added was 4% in 2003. The share of industry was 22%; Services had the largest share at 74%. The service sector is to be expanded further in the future and provide additional jobs. The Cornish economy is heavily dependent on tourism, with a share of around 25%.

Cornwall is the poorest region in the United Kingdom . It is therefore also supported by funds from the European Union's economic development program. Unemployment, which is traditionally quite high in the region, has fallen dramatically over the past 15 years.

St. Piran's flag and the coat of arms of Cornwall 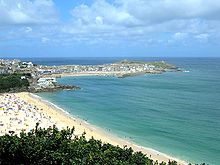 Cornwall is a very interesting region for tourism because of the pristine landscape, the rugged cliffs, the miles of fine sandy beaches, the mild climate and the numerous sights.

The Elizabethan mansion Trerice in Kestle Mill near Newquay

Cornwall has only been opened up for tourism in the last few years. For example, disused mines have been converted into visitor mines. The number of visitors therefore increased steadily from 1993 to 2003. In 2003, five million tourists visited the country, most of them from the UK and only four percent from abroad. The centers of tourism include St. Ives , which has already won several awards for its beaches and clear water and which , as an artists' colony, also has an offshoot of the London Tate Gallery , the well-known seaside resort of Penzance and Newquay, which is very popular with surfers . In addition to numerous bed and breakfast accommodations , Cornwall also offers a wide range of campsites.

Cornwall was the main source of tin in the Bronze Age and ancient times . Tin mining in Cornwall and Devon began between 2200 and 2100 BC. The tin was shipped all over the Mediterranean for bronze manufacture . Cornish tin led to the explorations of the Pytheas and to the Carthaginians' trade trips . However, after crossing the canal, the main trade route led by land through Gaul . The Cornish miners were some of the most skilled in the world.

By the end of the 19th century, Cornwall was supplying more than half of the world's tin needs. Copper was also mined here on a large scale. In the 20th century the mines were largely exhausted and mines in other countries could produce more cheaply. The last one to close in 1998 was the South Crofty Mine . Cornish miners emigrated to America. Some of the depleted tin mines were converted to arsenic extraction in the early 20th century due to the increasing industrial demand for arsenic , often a companion mineral to tin. In particular, the tailings piles from the tin extraction were processed. Large parts of the land around the mines were poisoned by the arsenic dust and turned into desert. It was not until the end of the 20th century that the land began to be recultivated and some mines such as For example, the Levant Mine or the Geevor Mine in the St Just mining area have been turned into visitor attractions.

In the late 19th century, the first submarine cables reached the coasts of Cornwall. The beaches of Porthcurno , Sennen and on the Lizard Peninsula are still considered important landing points for modern submarine cables . In addition to submarine cables, satellite communication plays a major role in Cornwall. The Goonhilly Satellite Earth Station , formerly the largest satellite system in the world, is located in the southern part of the peninsula.

The radio pioneer Guglielmo Marconi also took advantage of Cornwall's favorable location for transatlantic connections : on December 12, 1901, he achieved the first transatlantic radio transmission from his radio station in Poldhu on the Lizard peninsula. The signals sent from here were received again on Signal Hill near St. John's on Newfoundland .

Cornish, a Celtic language , allegedly died out as a mother tongue in 1777 with the death of the last primary speaker Dolly Pentreath from Mousehole . Cornish belongs to the south-west British branch of the island Celtic and is closely related to Welsh and Breton , the differences between the Irish and Scottish-Gaelic languages are greater. Efforts are now being made to revive the language and it has been recognized as a minority language by the British government .

Religiously and politically the beads are considered nonconformists. There is a dispute about who should be the national saint: St. Piran , Archangel Michael or St. Petroc . Saint Piran is considered to be more popular, its symbol (a white cross on a black background) adorns the flag of Cornwall . His name day, March 5th, is celebrated by the grains all over the world. Although his flag was chosen as a symbol by the Cornish secessionists , it also adorns the packaging of some Cornish pies in a non-political sense.

The administrative headquarters of Cornwall is in Truro . Before April 2009, Cornwall was divided into the six districts of Caradon , Carrick , Kerrier , North Cornwall , Penwith and Restormel . They were abolished by an administrative reform that came into force at this time and the competencies of the districts and the county were combined in a single unitary authority . The Isles of Scilly , which previously had extensive special rights, left the county at the same time and have since formed an independent Unitary Authority sui generis . Both are still linked through the ceremonial county and the Duchy of Cornwall .

The Duke of Cornwall (usually the British heir to the throne) has special rights over the entire county of Cornwall. The county's high sheriff is appointed by the duke, not the monarch, unlike all other counties in England and Wales. All property belonging to the deceased without a valid heir goes to the Duke throughout Cornwall, not to the monarch, as is customary in Great Britain. This regulation ( bona vacantia ) also applies to historical finds such as gold coins and shipwrecks. 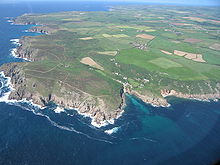 The Unitary Authority is divided into 213 parishes ( Parish ). 198 of these have their own parish council, in the remaining 15 residents' assemblies take place instead. As the seat of a bishop, Truro bears the title City and accordingly has a City Council . Bodmin , Bude , Callington , Camborne , Camelford , Falmouth , Fowey , Hayle , Helston , Launceston , Liskeard , Looe , Lostwithiel , Marazion , Newquay , Padstow , Penryn , Penzance , Redruth , Saltash , St Austell , St Blaise , St Columb Major St Ives , St Just in Penwith , Torpoint and Wadebridge are small towns ( Town ), accordingly the council there is called Town Council . Polperro has given itself the name Community and therefore a Community Council . 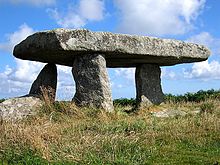 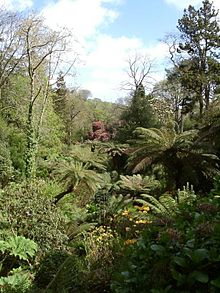 The Lost Gardens of Heligan

In British literature, Cornwall has always been a chosen setting for action in British literature, both in high and in children's and trivial literature. Virginia Woolf dedicated two of her novels to Cornwall. The most important novels by Daphne du Maurier , who lived in Cornwall for most of her life, are all set in Cornwall. The same is true of Howard Spring's novels . Jeremy Seal describes the importance of seafaring and beach piracy for Cornwall in the 19th century in a partly fictional work. The boarding school stories of Enid Blyton are also said to be set in schools on the Cornish coast. In trivial literature, it is mainly thanks to Rosamunde Pilcher that Cornwall has become more and more well-known in Germany since the 1990s , especially because of the novels filmed under German production for ZDF . 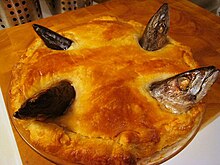 The Cornish Pasty , a dumpling pocket filled with various contents , is associated with Cornwall . Cornish Pasty is a protected geographical indication and may therefore only be used for pasty that complies with the relevant provisions. A traditional dish that legend explains its origins is stargazy pie , a pie with a fish filling.