Civil Parishes ( English " communities ") are the lowest local government units in the UK , which today, however, no longer have the importance of community in Germany in the UK, but as the counties in the "unified management authority" ( unitary authority ) or Non- Metropolitan Counties and Districts have risen. They have their origins in the parishes from the time before secularization , but their boundaries have shifted significantly over time due to area reforms. In the Republic of Ireland and Northern Ireland , civil parishes are further subdivided into townlands , e.g. B. Rathlin . 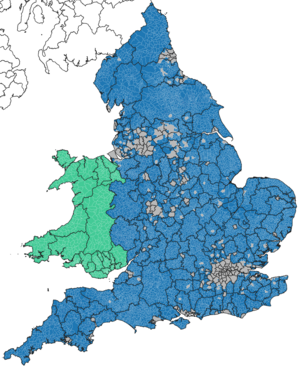 In England and Wales there are (usually within large cities) so-called unparished areas , i.e. areas that do not belong to a civil parish and do not form a separate administrative unit, e.g. B. Lundy . Civil parishes in Ireland have no administrative function and only serve as cadastral units, as do the townlands at the lowest level of division.

On April 1, 1974, the Local Government Act 1972 dissolved all civil parishes that had existed since 1894 and replaced them with new ones. Since then they have been the lowest administrative unit in England after the counties and districts ( districts or boroughs ).

By the Local Government Act 1972 all existing Civil Parishes were dissolved on April 1, 1974 and replaced by so-called communities ( Welsh cymunedau ). Since then they have been the counterpart to the English Civil Parishes.

In Scotland, as part of an administrative reform adopted in 1929, the tasks assigned to the parishes were shifted to a higher level and the elected governing bodies were dissolved. From then on they only served internal administrative purposes, in 1975 the parishes were finally abolished. The Community Council Areas introduced at the same time are their successors, but have a significantly weaker position. They are still in use as statistical units, for example in censuses.

The Civil Parishes had a certain role in tax collection and were entered on the maps of the Ordnance Survey Ireland in the 19th century . In Ireland the Civil Parishes are further subdivided into townlands .