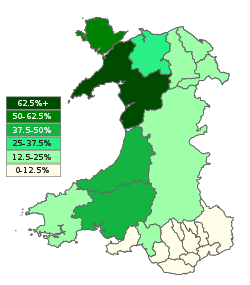 Spokesman for Welsh in Wales after the 2011 census

Welsh is still very much alive as it is still learned as a mother tongue by many children and spoken by all walks of life . In some parts of the country, especially in the north, Welsh speakers are still in the majority today, with a share of up to 70%. Over the past ten years, the percentage of speakers has remained constant, whereas previously it decreased slowly but steadily. The absolute number of speakers has recently increased again. Since Wales has had its own parliament , the Senedd Cymru or Welsh Parliament, measures to promote Welsh have been intensified. In addition, Welsh is the pride and identity-forming element of many Welsh people, even if they no longer speak it themselves.

According to the 2011 census, around 19% of Welsh people speak the language (2001: 20.5%). Some 8% of the population have limited knowledge of Welsh (e.g. reading only). The prospects for maintaining the language are quite good; Welsh is still predominantly spoken in rural areas. The youth organization Urdd Gobaith Cymru plays an important role in this .

Outside Wales, Welsh is spoken in the Chubut Valley in the Argentine province of Chubut in Patagonia .

On December 7, 2010, the National Assembly for Wales adopted a bill to make Welsh the official language of Wales alongside English. Since 2000, students in Wales have been required to study Welsh either as a first language or as a foreign language. Welsh is the first language of instruction in 20% of schools in Wales.

The position of the formants in a Bangor Welsh speaker 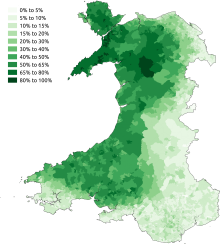 Spokesman for Welsh after the 2011 census

ch, dd, ff, ng, ll, ph, rh and th count as single letters and are also treated as such when they are arranged in dictionaries.

k, q, v, x and z do not appear in Welsh words; j appears only in English loanwords.

Vowels can be short or long:

The emphasis is, with few exceptions, on the penultimate syllable: Brenin = 'king', brenhínes =, Queen ', breninésau =, Queens'. One of the exceptions is Cymráeg = 'kymrisch', because ae or oe counts as two syllables.

A special feature of the Welsh language (as well as the other insular Celtic languages ) are the Anlautmutationen (Engl. Initial mutations, Cymric. Treigladau ). Under certain conditions, the initial consonant of a word is replaced by another in a regular manner.

Changes in the initial sound can be triggered by the preceding word ( article , possessive pronoun , prepositions ) or by the syntactic position or function of the word in the sentence itself ( subject , object , adverbial use).

So z. B. the possessive pronoun of the 2nd person singular dy ('your') lenierung; the 1st person singular fy ('my') nasalization; and that of the 3rd singular feminine ei ('her') aspiration. The following table illustrates the effects of the various initial changes ( kV = no change, i.e. the basic form is used):

Feminine nouns are also particularly “susceptible” to leniency. For example, if the specific article or number un (an) is placed in front, the noun and related adjectives are lenited. The example of cath (feminine, German: 'cat') shows:

Welsh differentiates between masculine and feminine nouns, but gender differences are generally only marked in the singular. One effect of gender is that a feminine noun is lenited (in the singular) if the article is in front of it (see above under "initial mutation"): cath - '(a) cat', but y gath - 'the cat'. However, the article itself does not show different forms of gender. If the noun is in the plural, the lenation does not take place: cath - '(a) cat', cathod - 'cats' (pl.) - y cathod 'the cats'.

The plural can be formed in different ways:

A small number of adjectives have separate feminine forms:

Generally, however, the same form is used after masculine and feminine nouns. Many of the separate feminine forms have also since fallen out of use.

Regardless of this, an adjective shows lenition when it comes next to a feminine noun, for example y gath fach - 'the little cat' (zu bach = 'small').

In terms of forms of increase, Welsh has, in addition to the comparative and the superlative , an equative ("so ... like"):

A special feature of Welsh (and other island Celtic languages) are the conjugated prepositions. The conjugated form only appears if a personal pronoun appears as a supplement to the preposition (i.e. the words i, ni, ti etc. in the following table):

Welsh is a classic example of a VSO language; H. the normal, unmarked word order in Welsh is verb - subject - object . More precisely, it means that there is a finite verb form at the beginning of a sentence, but infinitives usually not, the latter can then be found inside the sentence between subject and object. Examples:

• Finite main verb at the beginning of a sentence

'The teacher gave the boy a book.'

Word order in the noun phrase

One of the few exceptions is e.g. B. hen, old. It is used before the noun and triggers its lenation:

† extinct ; † revived ; (†) there were always at least second speakers