The title of this article is ambiguous. Further meanings are listed under Patagonia (disambiguation) . 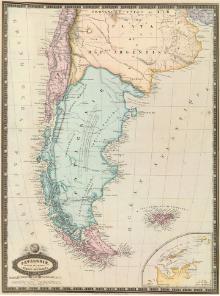 The country "Patagonia" on a map from 1862 (colored turquoise)

Patagonia refers to the part of South America that is located south of the Río Colorado in Argentina and Río Bío Bío in Chile and north of the Strait of Magellan . There is no precise, fixed delimitation.

Landscape in the Argentine part of Patagonia 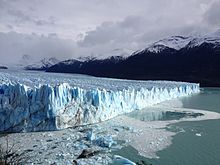 Perito Moreno in the southern winter 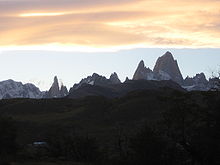 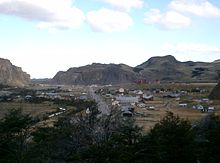 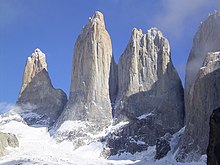 The towers of Paine in Chile 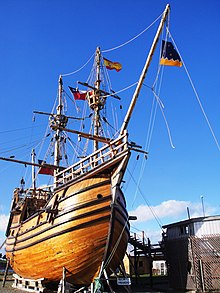 Patagonia is divided into two large landscapes separated from each other by the Andes . It consists of Western Patagonia , which mostly belongs to Chile, and Eastern Patagonia , which mostly belongs to Argentina . Tierra del Fuego, south of the Strait of Magellan , is also often counted as part of Patagonia. Patagonia is very sparsely populated. The mean population density is around two inhabitants per square kilometer, in Santa Cruz even less than one inhabitant per square kilometer.

The Argentine part of Patagonia with an area of ​​765,720 square kilometers consists of five provinces (from north to south):

The Chilean part of Patagonia includes

The landscape of large parts of Patagonia is characterized by the steppe-like plateau called the pampas . The Chilean part of Patagonia is characterized by the humid, cool climate of the western Andes and the associated Valdivian rainforest , with precipitation decreasing beyond 50 ° south latitude. The Argentine part is in the rain shadow of the Andes and is very dry. The constant strong wind is characteristic of this region. In the west of the Chilean southern tip of Patagonia lies the Chilean ice sheet , the largest contiguous ice mass outside the two poles and Greenland. Patagonia also includes the southern foothills of the Andes and the sub-Antarctic island region of Tierra del Fuego off the South American mainland.

In Patagonia there are two internationally known national parks, the Chilean national park Torres del Paine and the national park Los Glaciares on the Argentine side. The latter was placed on the UNESCO World Heritage List in 1981 and occasionally makes a name for itself with the spectacular eruptions of the Perito Moreno Glacier .

The southern Patagonian Andes is the only major cold temperate land area in the southern hemisphere , while the rest of Patagonia is largely part of the cool temperate zone.

Characteristic representatives of the Patagonian fauna are the guanaco , the rhea and the Andean condor . The numerous lakes of Patagonia are home to flamingos and many other water birds .

Patagonia is home to the Pit Viper, the Patagonian Lance Viper ( Bothrops ammodytoides ). It is the most southerly living species of snake.

Since the Spanish Conquista in the second third of the 16th century, runaway grazing animals - especially cattle and horses - spread from the pampas to Patagonia, and they quickly multiplied and feraled. They were called Cimarrones and offered the Indians who lived there at the time a new subsistence base as cavalry hunter cultures.

The stonefly Andiperla willinki lives in the glacier crevasses of Patagonia and feeds on organic inclusions in the ice.

Tourism in Patagonia has now become the main source of income in the Chilean part. More than 80,000 visitors were counted in the Torres del Paine National Park in 2003 . These are mainly concentrated in the summer months from November to February. The Los Glaciares National Park in Argentina with the Perito Moreno Glacier and the Cerro Torre and Mount Fitz Roy, which are particularly well known among alpinists, are popular tourist destinations. In San Carlos de Bariloche there is one of the most important alpine winter sports centers in South America, which also attracts extreme sports enthusiasts and hikers in summer. Other tourist centers in the Patagonian Andes are San Martín de los Andes , Esquel and El Bolsón . On the Chilean side, the tourist development of the Andes is less pronounced due to the natural spatial location, characterized by the fjord landscape , which is partially only accessible by water . In addition to the Torres del Paine National Park and the port city of Puerto Natales in the south, the island of Chiloé and the port city of Puerto Montt in the far north of the Chilean fjord landscape are also developed for tourism . In the center of the Patagonian fjord landscape is the Laguna San Rafael National Park , which can only be reached from Puerto Aisén .

The fjords form the basis for intensive fish farming and aquaculture on the Chilean side of Patagonia, where mostly salmon , mussels and crustaceans are also produced for the European market.

Another source of income on the Argentine side is stationary extensive sheep breeding on natural pastures (see pastoralism and ranching ) . The wool business initially boomed between 1930 and 1970, but later the price fell to around € 0.75 per kg. In 1970 the Cerro Hudson volcano erupted , after which many farmers had to give up their farms ( estancias ). As a result, foreign entrepreneurs, including the fashion manufacturer Benetton , bought old estancias and renovated them.

In the Argentine part, oil production (around Neuquén and Comodoro Rivadavia ), coal production near Río Turbio , electricity generation (Neuquén) and fruit growing in the fertile oasis valleys of the Río Negro and Río Chubut are still important.

The name Patagonia goes back to the Portuguese explorer Ferdinand Magellan . He gave the native Tehuelche Indians, whom he met while wintering in the region of Tierra del Fuego (Spanish: tierra del fuego ) in 1520 , the name patagones , probably because of their large stature .

Here he leaned on a fictional figure, the giant Pathagón from the Novelas de Caballería (Chapter Primaleon ). These novelas formed a collection of knight tales that attracted a great deal of attention at that time. The origin of the name itself is unclear, it may be derived from “big feet” (Spanish: patones ), since pata means “foot, paw” in Spanish. The only information about the events during Magellan's travels come from the diaries of his travel companion Antonio Pigafetta .