This article covers the bird species. For the superordinate bird family / genus see rhea . For the similar-sounding generic name in tarantulas see Nhandu .

The rhea (span. NANDU ) or Large rhea ( Rhea americana ) is a flightless bird from the kind of rheas ( Rhea ). It belongs to the ratites and is native to South America and as a neozoon in northern Germany .

With a top height of 1.25 to 1.40 meters (back height about 1 meter) and a weight of 20 to 25 kilograms, the rhea is the largest bird in the New World . This mainly affects the males, because as with the ostrich , the roosters are on average slightly larger than the hens. Rheas have loose, tattered-looking plumage and have the largest wings of all ratites. The legs are long and strong. In contrast to the situation in the two-toed ostrich, the feet of the rhea have three toes. The similarity between the two genera of flightless ratites is a fine example of convergence . Nandus reach speeds of up to 60 km / h on the run.

The plumage is gray or brown, the color varies greatly between individuals. As a rule, males are slightly darker and larger than females, but this is not a reliable distinguishing feature. The individual subspecies are mainly distinguished by the proportion of black feathers on the neck fletching.

The distribution area extends from the pampas , the grasslands in central Argentina and Uruguay , over the Gran Chaco to the northeast of Brazil . The species is also established as a neozoon in Germany , the only known population in Central Europe that was able to survive after escaping from enclosures.

Rheas inhabit savanna habitats, so they are absent in forests. In contrast to the Darwin rhea, the rhea is a flatland inhabitant who avoids high altitudes. The rhea also avoids cold climates and no longer occurs south of the 40th parallel .

According to the IUCN, the rhea is "potentially endangered". Its population is steadily declining due to hunting and the destruction of its natural habitat. 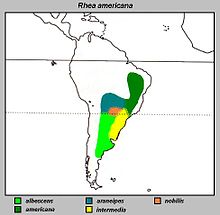 Five subspecies are recognized. They're just hard to tell apart; Above all, the black color of the neck, which is different in everyone, is an identification feature.

"Nandu" is derived from ñandu guasu ( guasu large and ñandu spider in Guaraní ), since the rhea resembles a large spider in courtship pose.

In 2000, several rheas escaped from a free-range facility in Schleswig-Holstein near the state border with Mecklenburg-Western Pomerania, moved from there to the district of Northwest Mecklenburg and observed there in the lowlands of the Wakenitz , in the area between Schattin and Herrnburg , and further south near Utecht were. Already in 2001 there was an unsuccessful brood attempt and the proof of a successful brood through the observation of a male with 14 chicks, further successful broods were documented in 2002 (1), 2003 (at least 3) and 2004 (at least 5). In 2002 11 rheas were found in the Wakenitz lowlands, in 2004 there were already 20 in the Schattin - Utecht - Duvennest area . By August 2009 the population had grown to around 80 animals, and in March 2011 the population went from over 100 specimens out. Counts by rangers of the Schaalsee biosphere reserve in autumn 2014 resulted in 144 animals, in spring 2015 120 animals, in autumn 2015 177 animals, in autumn 2016 over 200 animals and in March 2017 220 animals in the 150 square kilometer distribution area east of the Ratzeburg lake . After the number of rheas had dropped to 205 animals by March 2018, presumably due to the long, cold winter, the autumn census in the same year counted 566 animals, the majority of them young. The Mecklenburg-Western Pomerania Ministry of Agriculture and Environment suspects the unusually warm and dry weather of the year to be the cause of this high increase within one year.

The species is apparently quite adaptable. In Mecklenburg-Western Pomerania, rheas mainly inhabit set-aside areas with extensive dry and semi- arid grassland and pine forests, but have also been observed on grassland, arable land and in deciduous forest. In winter, the animals look for food in rapeseed fields and set-aside areas. So far, clutches have been found in dry grassland, herbaceous vegetation, on grain and rapeseed fields and in deciduous forests.

Evaluation from the point of view of nature conservation

In nature conservation circles, the assessment of the rhea as a breeding bird is very different in Germany. So the liquidation of the stocks, i.e. the killing of all rheas is required. This is justified with the precautionary principle, as the rhea could prove to be an invasive species . According to Section 7, Paragraph 2, No. 9 of the BNatSchG, invasive species are declared as those species that pose a significant threat to naturally occurring ecosystems, biotopes or species. Invasion potential is ascribed to the rhea because a threat to other ground-nesting birds and ground fauna cannot be ruled out.

The rhea is currently on the gray list . Potentially invasive species are placed on the gray list so that the authorities can monitor them. Fears about a possible endangerment of ground breeders, reptiles and insects have not been confirmed by field research and stomach examinations. According to Section 40, Paragraph 2 of the BNatSchG , before any control measures are taken, it must first be clarified whether a species is actually invasive, i.e. whether it endangers naturally occurring ecosystems, biotopes and species. At present, further investigations into the effects of the native rhea population are not regarded as urgent, as some of the population is not fully winter-proof and could therefore become extinct again.

Measures to contain the population

After complaints from agriculture about increasing damage to rapeseed and grain fields, the Schaalsee-Elbe Biosphere Reserve Office approved since 2017 to curb the population of wild rheas by manipulating the clutch. For this purpose, the eggs in the clutch are drilled by persons registered by name.

Since the population grew to 566 animals (2018 autumn census) despite this measure, the farmers' association demanded that male rheas should be allowed to be hunted. As a result, according to Agriculture Minister Till Backhaus ( SPD ), two farmers received a shooting permit and shot 17 rheas in their fields from January to March 2019. The 2019 spring census showed a population of 362 animals. Another 40 to 50 animals are expected to be shot in 2019. In order to clarify whether the rheas harm the native flora and fauna, monitoring is planned from autumn 2019 to examine the specimens that have been shot and to equip some animals with GPS transmitters.

In March 2020, the hunting law in Mecklenburg-Western Pomerania was changed so that the rheas are included in hunting law, chicks and yearlings can be hunted all year round, as well as roosters and hens over the age of 2 years from November 1st to March 31st.