This article describes the term for the American continent. For additional meanings, see New World (disambiguation) . 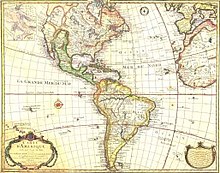 Map of the New World by Guillaume Delisle (around 1774)

The New World is a historical European name for America, rediscovered by the Spaniards under Christopher Columbus in 1492 . The "New World" was juxtaposed with the previously known Old World , consisting of Europe , Asia and Africa .

Columbus supposedly believed until his death in 1506 that on his journey to the west he had discovered islands and parts of Asia , which at that time was known by the collective term "India". For this reason, the Spanish called America Las Indias until the 18th century (see also Archivo General de Indias ). For the area of Central America and the islands of the Caribbean , the name West Indies was used until the 19th century . However, the conviction of some geographers and explorers , including Amerigo Vespucci in 1500, that a new continent had been discovered, was soon confirmed.

Today the term is rarely used: