This article deals with the activity of the scholar. For further meanings of geographer and geographer, see Geograph (disambiguation) .

A geographer (or geographer ) is an academically trained scientist in the field of geography . Geographers independently collect spatial data on different scales, analyze them, derive general theories and models from them and can use these to forecast spatial development trends.

Geographers are generalists because of the breadth of their field. The way you work is both analytical and normative ; Geographers deployed as planners orientate themselves towards the modern understanding of planning and provide solutions for problems between humans and the environment .

Contrary to the widespread belief that geographers are concerned with the production of map series , this is the task of cartographers today . In practice, the latter often work together with geographers, since analogue maps or digital geodata are most expediently depicting structures that can be spatially localized (which are examined by geographers).

Today geographers work for local , regional , national and supranational authorities and agencies; furthermore often in chambers and associations , in development cooperation and in non-governmental organizations (NGOs) e.g. B. in the environmental sector. In the private sector, geographers mostly work as planners and consultant spatial scientists in planning and engineering companies . They also work in the transport industry in matters of transport planning. Larger companies and institutions also appreciate the expertise of geographers in the field of strategic and location development.

In the Federal Republic of Germany , Switzerland and Austria , the geographer is usually an academic profession with at least six semesters of university studies .

Geography can be studied at more than 40 universities in Germany. There is no university degree. In the course of the changed study regulations ( Bologna process ), there are predominantly bachelor's and master's degrees in geography with the respective academic degrees:

The following degrees and degree certificates were awarded beforehand:

The doctoral degree for geographic studies is awarded according to the respective doctoral regulations . Common are:

In Switzerland, the geographic university degree concludes with the academic degree dipl. geogr. from, in Austria with a Magister degree ( Mag. or Mag.a ) or in the future with a Bachelor of Science and Master of Science .

Since geography as an interdisciplinary science has numerous points of contact with other disciplines and brings them together in a technical way, the job description of geographers can often not be clearly defined. Specialized professions in a related field are e.g. B. Geoinformatiker , geologist , meteorologist , soil scientists , Geoökologe , economic geographer , planners , regional planners , transport planners , city planners , real estate developers , site planners uv am

The geographer in art 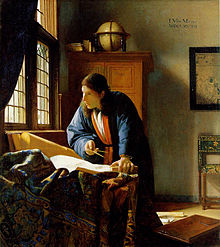 Johannes Vermeer painted the famous painting The Geographer in 1668/69. Until 1797 it formed a pair of pictures with the painting The Astronomer . After that the pictures were sold separately. They document the growing reputation of scientific research in Europe in the 17th century.

In literature, the best-known geographer is the one in Antoine de Saint-Exupéry's bestseller “ The Little Prince ” , whom the protagonist describes as a man with a “real job”, while the geographer makes it clear that he is not a researcher himself and only records the immortal.

Studies and fields of activity