Geocentric view of the world 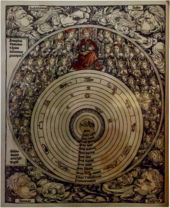 The geocentric view of the world ( ancient Greek γεοκεντρικό geokentrikó "earth-centered") is based on the assumption that the earth and thus also humans occupy a central position in the universe , so that all celestial bodies ( moon , sun , the other planets and the fixed stars ) circle the earth . The geocentric view of the world corresponds to the immediate appearance and was worked out in detail as early as classical antiquity in Greece, especially by Aristotle (384–322 BC). It was then the prevailing view in Europe for about 1800 years. A geocentric view of the world was also taught in ancient China and the Islamic world. It is not certain whether it was represented in ancient Mesopotamia before the Greeks . In the Renaissance the geocentric was replaced by the heliocentric worldview with the sun as the center of the cosmos, which appeared in its first form in Aristarchus of Samos (310–230 BC), also in antiquity.

The movements of the moon, sun and planets around the earth appear different and for most of the time a little slower than the rotation of the fixed star sky. According to the simplest geocentric system, they take place in different, concentrically arranged rotating spheres from inside to outside , whose axes of rotation go through the center of the earth. These spheres were partially interpreted as transparent hollow spheres. The fixed stars are attached to the outermost and fastest sphere, and to the innermost, which is also the slowest, the moon. The planets show particular irregularities. These made it necessary to give the moving stars, instead of the simple uniformly traversed circular orbit, compound circular orbits ( epicyclic theory ) and, according to an idea attributed to Hipparchus , to move the earth from the exact center of the planetary movements ( equant ). Through Claudius Ptolemy (approx. 100-160 AD) and his successors, the geocentric view of the world for calculating the positions of the stars in the sky took the form of a mathematically detailed system with up to 80 epicycles.

In the geocentric worldview, since Aristotle, the earth has been predominantly assumed to be spherical. The geocentric view of the world is not to be confused with the concept of the flat earth .

The earth in the center 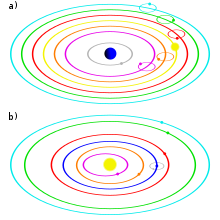 In the geocentric worldview it is assumed that all movements of the moon, the sun and the planets run geometrically on curves around the earth, which is thought to be stationary or rotating around its axis. In the homocentric system of the Eudoxos of Knidos (approx. 390–338 BC) this curve movement takes place on circular paths, the axes of which go through the center of the earth and thus appear perfect.

Apollonios von Perge (262–190 BC) and Hipparchus (approx. 190–120 BC) adapted the planetary motions better to the observation data in their models with the help of eccentrics and epicycles. Herakleides Ponticos (approx. 390–322 BC) is assigned a system in which the planets Mercury and Venus rotate around the sun, which in turn, like the moon and the sphere of fixed stars, rotates around the earth, which is kept in its central position. This represents a compromise between the geocentric and the heliocentric world system. In recent research, however, it is heavily disputed whether Herakleides taught this world system.

An important reason for the geocentric view of the world lay in the observation that the earth is felt to be at rest and that celestial bodies orbits it. Furthermore, the force of gravity could easily be explained by the fact that all gravity tends towards its natural place, which can only be the center of the world. Even Aristotle was an influential advocate of the geocentric worldview. Strictly speaking, Aristotelian physics is not compatible with the auxiliary assumptions of eccentrics, epicycles and equants. It harmonizes best with the homocentric variant. The sun and the planets were partly assumed to consist of a supernatural "fifth element", the quintessence , whose natural movement was the circular path.

Loop orbit of a planet according to the epicyclic theory. The earth is in the center, the planet describes, as observed, a partially retrograde orbit.
→ Main article : Epicyclic theory

The Ptolemaic worldview is a geocentric worldview based on the Aristotelian assumption that celestial bodies can only move on circular orbits at constant speeds. It was worked out by Claudius Ptolemy (approx. 100–160 AD). His work Mathematices syntaxeos biblia XIII established this geocentric worldview in Europe for almost 1500 years.

A challenge for the geocentric view of the world with its assumption of exclusively uniform circular movements around the earth are the irregularities of the movements of the sun, moon and planets observed in the sky against the starry background. Mercury and Venus periodically overtake the sun and then fall back again, while the outer planets ( Mars , Jupiter, Saturn ) always have retrograde movements when they face the sun. This phenomenon, which is also known as retrograde movement , leads overall to an apparent loop movement of the planet from the earth's perspective. In order to bring these observations in line with the geocentric view of the world, it was assumed that the celestial bodies in question move on a combination of several circular orbits. Then they move in a small circular path ( epicyclic ) around a point, which in turn revolves around a larger circle ( deferent ). However, this movement does not take place at a constant speed, and the earth is not exactly in the center of the defender. For the sake of better agreement with the observations, Ptolemy assumed two further points equidistant from the center of the defendant, the eccentric and the equant . The earth stands in the eccentric, from the equant the movement on the deferent appears uniform.

The planet orbit observed from the earth is thus represented as a superposition of these movements. In some cases, further orbits around these circles were modeled. Calculations within this model were very complicated. By using a total of around 80 such orbits, Ptolemy was able to reconcile the geocentric view of the world with the observations of planetary movements that were possible at the time. With the optimal choice of parameters, however, a system with only nine epicycles could have achieved comparable accuracy. 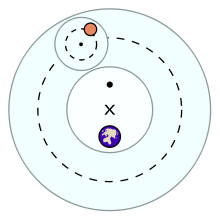 Ptolemaic system with epicyclic around the defendant (dashed circle), position of the equant (black point), center of the defendant (cross) and earth

Geocentric view of the world with planetary orbits and signs of the zodiac in St. Georgen Monastery around 1506

The geocentric view of the world was close to the everyday experience of the observer and did not contradict the Bible. The Christian churches took it over and vigorously defended it. The church father Basilius the Great (330–379) treated the creation account exegetically in nine homilies and drew a picture of nature that was directly linked to antiquity. His fasting sermons influenced his friend Ambrosius of Milan (340–397). It was through this that his pupil Augustine of Hippo became known. The original Greek texts of Ptolemy were not available to the West in the Middle Ages; his and Aristotle's theories were known through Latin compendia literature. The scholastics of the 13th century also saw the earth as the absolute center with which the position of man was defined. In contrast, the kingdom of God and the saints is in the highest sphere of heaven: empyrean .

Successor models of the geocentric worldview

The geocentric view of the world was not questioned in the Middle Ages or in the early Renaissance . Lasting doubts only arose with Nicolaus Copernicus , Giordano Bruno and Galileo Galilei were finally accused by the Inquisition of heresy for advocating the heliocentric system of Copernicus .

Through the work of Nikolaus Kopernikus and Johannes Kepler , who came to the laws of elliptical planetary motion, the geocentric view of the world proved to be outdated. It was replaced by the simpler and mathematically easier to use heliocentric view of the world, which a little later could also be explained physically with Isaac Newton's theory of gravity . The laws of nature that were effective on earth were from now on also considered to be valid for the cosmos.

Abolition of the centric worldview 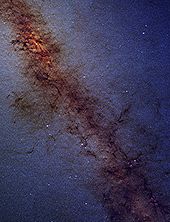 The galactic center at the top left in the infrared spectrum, obscured by clouds of dust

Galileo Galilei had already seen that the nebula of the Milky Way - in which our solar system is also located - consists of stars. After the discovery of the structure and the rotation of the Milky Way, the sun could no longer be considered the center of the universe. The center of mass of our Milky Way is called the galactic center . It follows that the sun revolves around this center.

Most of the nebulae discovered by astronomers in the 18th century turned out to be galaxies of their own. The fact that the Milky Way is just one of many rotating systems goes back to Edwin Hubble in the 1920s.

According to modern scientific cosmology and Einstein's theory of relativity (1905, 1916), no point in space is fundamentally distinguished, which makes the question of an absolute center superfluous.

Today's use of the geocentric point of view

In practical applications today, different perspectives can be taken as required. The central question is of a purely computational nature; it is relocated to where it gives the most useful representation.

In observational astronomy , where it is an expedient intermediate step in the computational process, one speaks of the geocentric coordinate system (related to the center of the earth) in contrast to topocentric vision problems (those on the surfaces of rotating bodies), i.e. the actual position of the observer. In the subjective perception of the observer on earth, the sun, moon and planets move around their observation point (origin of coordinates). Typical topocentric data is the timing of the up and sinking of the sun and moon . The tracking of telescopes or controls of a planetarium calculate strictly topocentrically.

Modern analytical planetary theories such as VSOP or the lunar theory ELP are formulated in geocentric, heliocentric or barycentric versions with and without relativistic effects, so that, depending on the application in astronomy and space travel, as little computational effort as possible is necessary. The attempts to explain smaller fluctuations in the meantime, such as the epicycles of the planets in relation to the earth, are then contained there in the form of periodic terms. In particular, the problems of near-earth space travel (such as satellites) are naturally calculated purely geocentrically and the other celestial bodies, including the sun, are interpreted as moving orbital disruptions that have to be taken into account with varying degrees of accuracy depending on the case . Applications such as measuring the earth's gravitational field from satellite data or GPS navigation would not be possible without a model of a stationary earth. If the calculation is precise, however, the exact location of the geocenter (center of the earth) must be taken into account depending on the application (earth body models).

Regardless of the scientific findings, in surveys in western societies, 20-30% of those questioned regularly agree with the statement that “the sun revolves around the earth”. In school books too, the facts are often shortened, misrepresented and sometimes misrepresented.